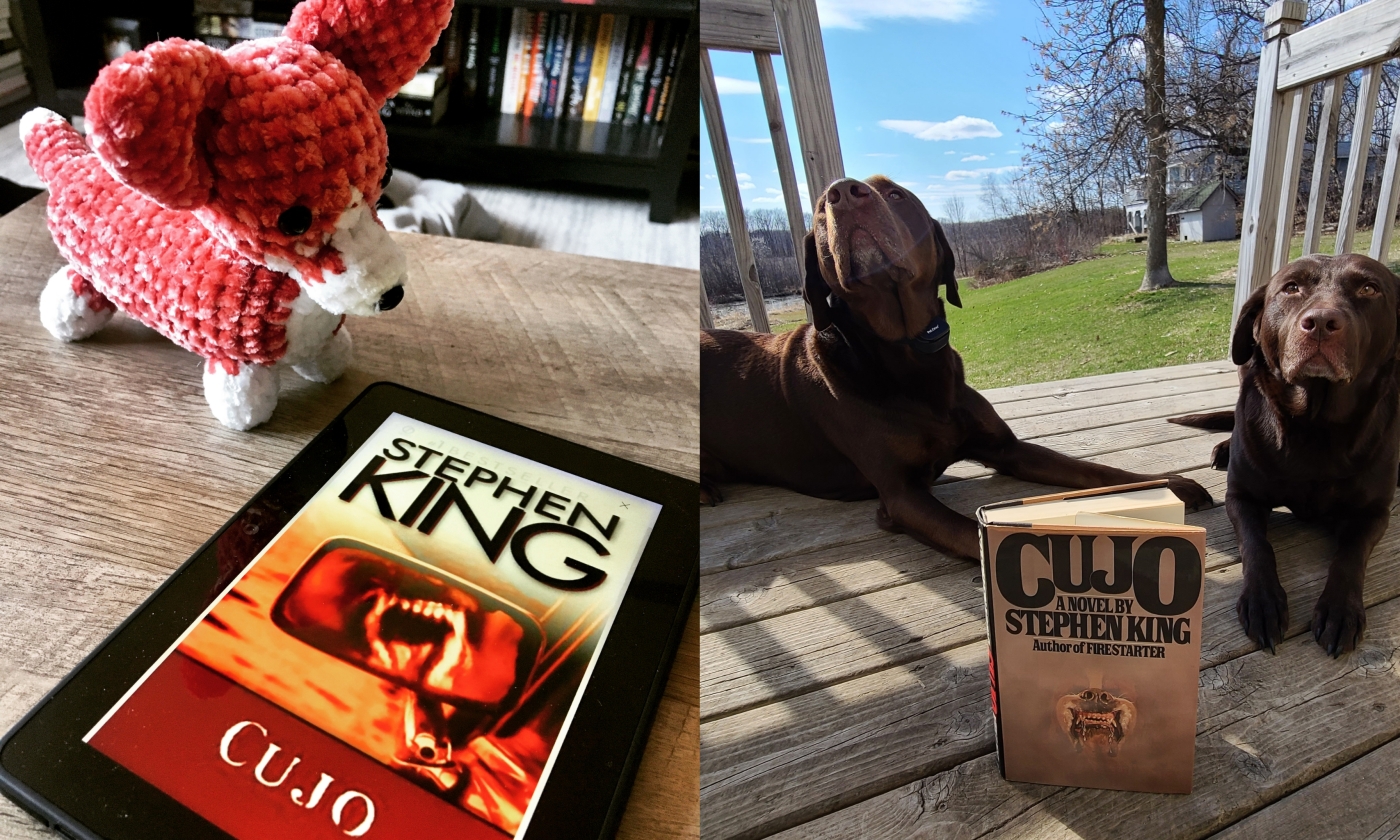 Just rolling on through the #ChronologicallyKing reread!

The first book for April is Cujo! 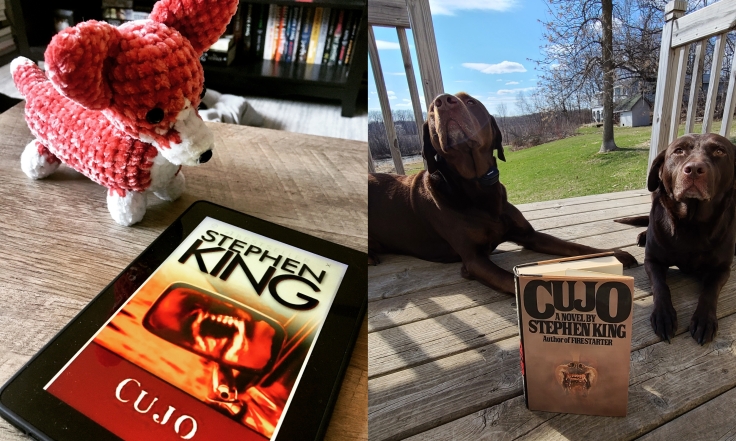 He lay on the verge of grass by the porch, his mangled snout on his fore-paws. His dreams were confused, lunatic things. It was dusk, and the sky was dark with wheeling, red-eyed bats. He leaped at them again and again, and each time he leaped he brought one down, teeth clamped on a leathery, twitching wing. But the bats kept biting his tender face with their sharp little rat-teeth. That was where the pain came from. That was where all the hurt came from. But he would kill them all. He would–

Cujo is a two-hundred-pound Saint Bernard, the beloved family pet of the Joe Cambers of Castle Rock, Maine, and the best friend ten-year-old Brett Camber has ever had. One day Cujo pursues a rabbit into a bolt-hole–a cave inhabited by some very sick bats. What happens to Cujo, and to those unlucky enough to be near him, makes for the most heart-squeezing novel Stephen King has yet written.

Vic Trenton, New York adman obsessed by the struggle to hand on to his one big account, his restive and not entirely faithful wife, Donna, and their four-year-old son, Tad, moved to Castle Rock seeking the peace of rural Maine. But life in this small town–evoked as vividly as a Winesburg or a Spoon River–is not what it seems. As Tad tries bravely to fend off the terror that comes to him at night from his bedroom closet, and as Vic and Donna face their own nightmare of a marriage suddenly on the rocks, there is no way they can know that a monster, infinitely sinister, waits in the daylight, and that the fateful currents of their lives will eddy closer and faster to the horrifying vortex that is Cujo.

Stephen King has never written a book in which readers will turn the pages with such a combination of anticipation and dire apprehension. Doing so, they will experience an absolute master at work.

I did it! I FINALLY read Cujo! While this is vastly known as the St. Bernard that went rabid, in true King fashion, there’s so much more to the book than just that. I’m sure there are tons of undertones and symbolism thrown in but here’s my take on this sad and “could be true” story.

I can understand why this would be hard for some people to read. I’m an animal lover through and through but like with most horror fiction, I can take and handle all the terrible things that can happen, human or animal alike. However, I didn’t expect to get Cujo’s POV and oh my heart…. I don’t care what happened or what he did, Cujo is still a GOOD BOY. He just chased the wrong rabbit… and hell, even Alice did that!

What I don’t understand is the inclusion of the monster in Tad’s closet…. was this a necessary thing to include? I don’t think it was for *this* particular story. However, I think in bringing the universe of King together, we start seeing the first hints of how these books all intertwine, and for that, I can appreciate it. However, for the sake of this story alone, it just seemed thrown in and unnecessary. Or did I miss something here? *shrug*

I walk away glad that I read this book… finally. Now to watch the movie. Getting my popcorn at the ready.

After having read this years ago and seen the movie a few times, I think this definitely deserved a reread. Whenever people think of CUJO they think of a giant Saint Bernard attacking people but there is so much more to the book than that. A bite from a rabid bat starts the slow decline for poor Cujo. A once incredibly loyal companion and best friend to the Cambers, turns into a mad dog on a murderous spree.

I forgot how much of the novel was more character driven. In true King form, we get a well-rounded picture of the characters involved and, despite the shorter length, they all were very well-developed. It’s sad how much of this gets forgotten when you see the movie or think of the story in general. Like I mentioned before, this one is so much more than just a mad dog.

I think this falls under the category of the realistic kind of horror. There aren’t monsters or supernatural qualities – a rabid animal is a terrifying occurrence that we can’t avoid. I definitely recommend this classic, and as always, there are differences between this and the adaptation and I’m curious what people like better between them.