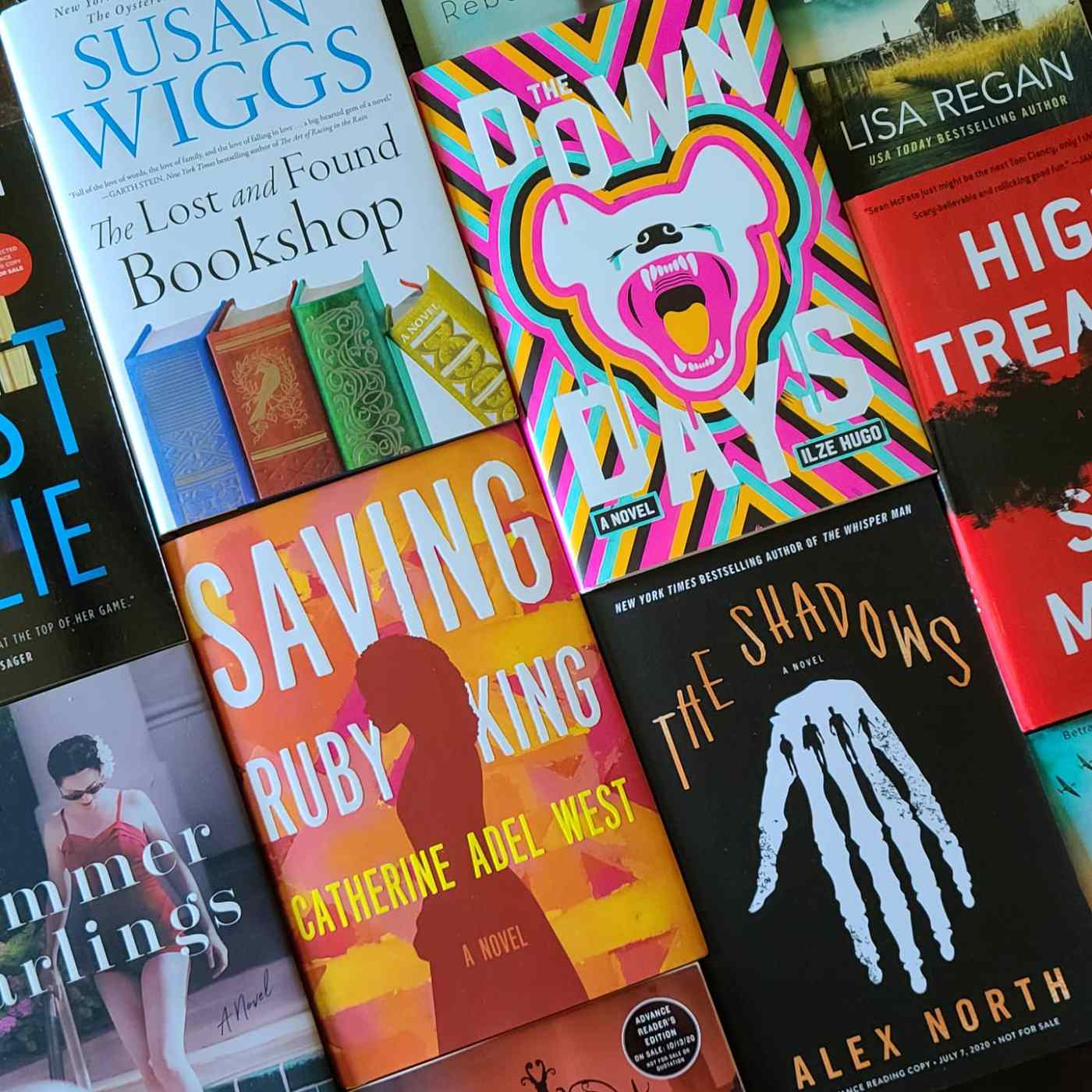 I always love doing these collages and showing off the covers!

Check back for the full reviews!

Set during the splendid summer days of 1960s Martha’s Vineyard, this page-turning debut novel pulls back the curtain on one mysterious and wealthy family as seen through the eyes of their nanny—a college student who, while falling in love on the elegant island, is also forced to reckon with the dark underbelly of privilege.

In 1962, coed Heddy Winsome leaves her hardscrabble Irish Brooklyn neighborhood behind and ferries to glamorous Martha’s Vineyard to nanny for one of the wealthiest families on the island. But as she grows enamored with the alluring and seemingly perfect young couple and chases after their two mischievous children, Heddy discovers that her academic scholarship at Wellesley has been revoked, putting her entire future at risk.

Determined to find her place in the couple’s wealthy social circles, Heddy nurtures a romance with the hip surfer down the beach while wondering if the better man for her might be a quiet, studious college boy instead. But no one she meets on the summer island—socialite, starlet, or housekeeper—is as picture-perfect as they seem, and she quickly learns that the right last name and a house in a tony zip-code may guarantee privilege, but that rarely equals happiness.

Rich with the sights and sounds of midcentury Martha’s Vineyard, Brooke Lea Foster’s debut novel Summer Darlings promises entrance to a rarefied world, for readers who enjoyed Tigers in Red Weather or The Summer Wives.

In this thought-provoking, wise and emotionally rich novel, New York Times bestselling author Susan Wiggs explores the meaning of happiness, trust, and faith in oneself as she asks the question, “If you had to start over, what would you do and who would you be?”

Somewhere in the vast Library of the Universe, as Natalie thought of it, there was a book that embodied exactly the things she was worrying about.

In the wake of a shocking tragedy, Natalie Harper inherits her mother’s charming but financially strapped bookshop in San Francisco. She also becomes caretaker for her ailing grandfather Andrew, her only living relative—not counting her scoundrel father.

But the gruff, deeply kind Andrew has begun displaying signs of decline. Natalie thinks it’s best to move him to an assisted living facility to ensure the care he needs. To pay for it, she plans to close the bookstore and sell the derelict but valuable building on historic Perdita Street, which is in need of constant fixing. There’s only one problem–Grandpa Andrew owns the building and refuses to sell. Natalie adores her grandfather; she’ll do whatever it takes to make his final years happy. Besides, she loves the store and its books provide welcome solace for her overwhelming grief.

After she moves into the small studio apartment above the shop, Natalie carries out her grandfather’s request and hires contractor Peach Gallagher to do the necessary and ongoing repairs. His young daughter, Dorothy, also becomes a regular at the store, and she and Natalie begin reading together while Peach works.

To Natalie’s surprise, her sorrow begins to dissipate as her life becomes an unexpected journey of new connections, discoveries and revelations, from unearthing artifacts hidden in the bookshop’s walls, to discovering the truth about her family, her future, and her own heart.

Family. Faith. Secrets. Everything in this world comes full circle.

When Ruby King’s mother is found murdered in their home in Chicago’s South Side, the police dismiss it as another act of violence in a black neighborhood. But for Ruby, it’s a devastating loss that leaves her on her own with her violent father. While she receives many condolences, her best friend, Layla, is the only one who understands how this puts Ruby in jeopardy.

Their closeness is tested when Layla’s father, the pastor of their church, demands that Layla stay away. But what is the price for turning a blind eye? In a relentless quest to save Ruby, Layla uncovers the murky loyalties and dangerous secrets that have bound their families together for generations. Only by facing this legacy of trauma head-on will Ruby be able to break free.

An unforgettable debut novel, Saving Ruby King is a powerful testament that history doesn’t determine the present and the bonds of friendship can forever shape the future.

In the vein of The Book of M comes a fast-paced, character-driven literary apocalyptic novel that explores life, love, and loss in a post-truth society.

In the aftermath of a deadly outbreak—reminiscent of the 1962 event of mass hysteria that was the Tanganyika Laughter Epidemic—a city at the tip of Africa is losing its mind, with residents experiencing hallucinations and paranoia. Is it simply another episode of mass hysteria, or something more sinister? In a quarantined city in which the inexplicable has already occurred, rumors, superstitions, and conspiracy theories abound.

During these strange days, Faith works as a fulltime corpse collector and a freelance “truthologist,” putting together disparate pieces of information to solve problems. But after Faith agrees to help an orphaned girl find her abducted baby brother, she begins to wonder whether the boy is even real. Meanwhile, a young man named Sans who trades in illicit goods is so distracted by a glimpse of his dream woman that he lets a bag of money he owes his gang partners go missing-leaving him desperately searching for both and soon questioning his own sanity.

Over the course of a single week, the paths of Faith, Sans, and a cast of other hustlers—including a data dealer, a drug addict, a sin eater, and a hyena man—will cross and intertwine as they move about the city, looking for lost souls, uncertain absolution, and answers that may not exist.

You knew a teenager like Charlie Crabtree. A dark imagination, a sinister smile–always on the outside of the group. Some part of you suspected he might be capable of doing something awful. Twenty-five years ago, Crabtree did just that, committing a murder so shocking that it’s attracted that strange kind of infamy that only exists on the darkest corners of the internet–and inspired more than one copycat.

Paul Adams remembers the case all too well: Crabtree–and his victim–were Paul’s friends. Paul has slowly put his life back together. But now his mother, old and senile, has taken a turn for the worse. Though every inch of him resists, it is time to come home.

It’s not long before things start to go wrong. Reading the news, Paul learns another copycat has struck. His mother is distressed, insistent that there’s something in the house. And someone is following him. Which reminds him of the most unsettling thing about that awful day twenty-five years ago.

It wasn’t just the murder.

It was the fact that afterward, Charlie Crabtree was never seen again…

In this pulse-pounding third action thriller for fans of Brad Thor and David Baldacci, hero Tom Locke, introduced in Shadow War and Deep Black, must stop traitors and ruthless mercenaries working together to overthrow the president.

En route to the National Prayer Breakfast, the U.S. vice president’s motorcade is hit in a vicious, expertly planned attack that throws Washington, D.C. into chaos. Everyone assumes it’s ISIS—everyone but young FBI agent Jennifer Lin. She is certain that Russia is behind the strike.

Half a world away, military contractor Tom Locke has his own doubts about what happened—and who did it. He suspects his former employer, Apollo Outcomes, might be involved. But why would the global security firm orchestrate an attack on US soil?

Returning to D.C., Locke discovers that a civil war has fractured Apollo. A division has splintered off, a rogue unit led by an ambitious, unprincipled former colleague who may have planned the attack himself. But Apollo couldn’t have pulled this off without help from inside the government. The official’s itinerary and route were confidential—which means there must be a traitor high up in either the White House or the NSA who is leaking information to Apollo.

But why? And who could be pulling the strings? Islamic fundamentalist terrorists? Or is this a new ploy by Putin to discredit the U.S. government and divide it from its democratic allies? Only Locke can get to the bottom of the conspiracy that traverses the globe and blow it apart with one strategic strike before it’s too late.