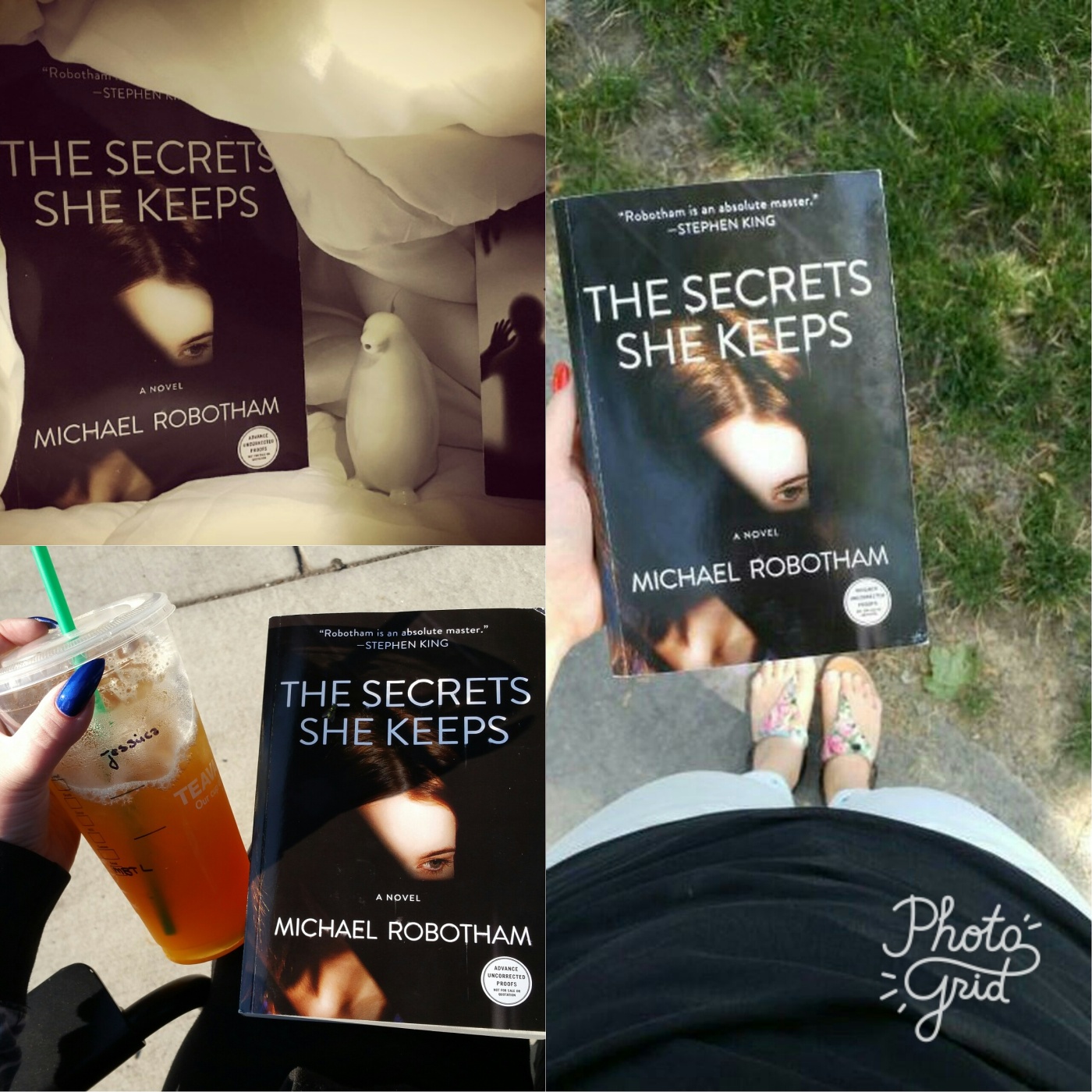 Another day in July and another thriller! THE SECRETS SHE KEEPS by Michael Robotham was released on July 11th and the #CJSReads2017 trio had chosen it for this month.

Spoiler – we all LOVED it! 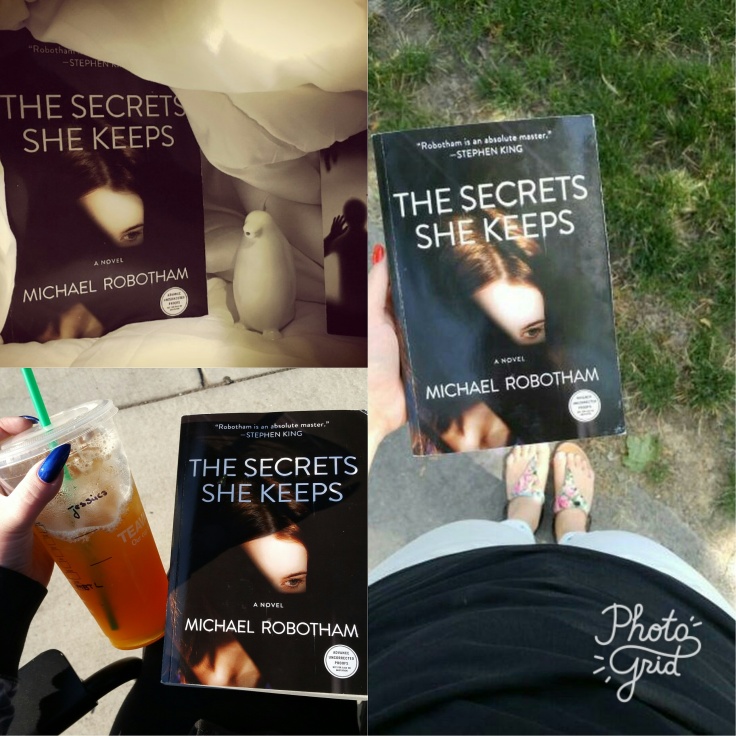 Meet Meghan – married to the man of her dreams, two healthy children at home and a third on the way.  She write a successful mommy blog and seems to have it all.  Agatha, a part time worker at a deli, reads this blog and adores Meghan from afar.  Both 8 months pregnant, Agatha starts to feel a kinship with Meghan and approaches her one day while she’s in the grocery store.  Thus begins the beginning of their friendship and commiserating over their upcoming due dates.  They both discover that appearances can be deceiving and that they both have secrets they’d like to keep locked away.

One thing I have always been impressed with is the ability of a male author to get inside a woman’s brain.  Michael Robotham manages to get into two.  Told in alternating chapters between Meghan and Agatha, he builds their worlds in the first part of the book to where the reader gets a deep understanding of their character.  This is done with good reason because as world’s collide, things start moving and methodically start to fall to pieces.  The author seamlessly takes us on their journey and has us empathizing with both women… AND the people around them.  If I was being picky, there’s just one thing at the end I couldn’t quite wrap my head around but it didn’t detract from the book in any way.   Touching on relationships between a man and a woman and the insecurities that arise from … well, just living… it hit home with me on a level other books re this subject matter hasn’t done before.  It’s harrowing and honest in that the worst things you think that can happen either bring you closer or tear you apart in a relationship.  How much can you forgive and will your mind allow you to move forward?

A full 5 stars for a book that kept me turning page after page until the wee hours.

I was incredibly excited when #cjsreads decided to make The Secrets She Keeps by Michael Robotham a July pick; I had heard nothing but amazing things about this novel.  Now that I have finished reading it for myself, I’d have to agree.  This book is worth all the hype.

Agatha, eight months pregnant, lives her mundane life admiring Meghan, one of the mums she sees out and about.  Meghan has it all: a baby on the way, two other adorable children, a loving husband, a beautiful house and a blog that Agatha reads each night.  Both women, due around the same time, have their own web of dark secrets and when Agatha finally musters enough courage to speak to Meghan, it sets into motion a series of events that cannot be undone.

Told between alternating perspectives between two pregnant women (Agatha and Meghan), Robotham weaves a tale of deception, desperation and desire.

Initially, I felt as if this book was going to read like a thousand others I had read before.  I wasn’t 100% sure where the author was going to go with the story but I knew it had a similar dark vibe from some others I had read recently (for example, like Watching Edie).  However, after the first few chapters, I knew this would be completely different and, needless to say, I was hooked.   Fast paced plot with complex characters had me racing through the chapters.   I, in part, was turning the pages faster and faster because I wanted to see what would happen and the other part of me needed to take frequent breaks because the pages were becoming too intense!

Overall, if you like a psychological thriller that is INTENSE and will keep you turning the pages late into the night, then you will want to read The Secrets She Keeps.  I have read almost 200 books this year and this one is at the top.

Yet another book where the King is quoted on the cover! “Robotham is an absolute master.” If Stephen King is calling you the master of psychological suspense, then I definitely need to be reading this book! THE SECRETS SHE KEEPS by Michael Robotham is psychological thriller that follows the lives of two pregnant women. They cross paths and their lives are forever changed.

We follow Agatha and Meghan. Two pregnant women who lives are about to irreversibly intertwine. Agatha is working part time stocking shelves at a grocery store in an expensive London suburb. While she works she always hopes to catch a glimpse of a customer she idolizes – Meghan. Meghan has the seemingly perfect life – two perfect children, an adoring husband, a happy marriage, and a successful parenting blog, that Agatha reads religiously.

Meghan’s life is far from perfect. With her marriage on the rocks lately and her husband, Jack, becoming increasingly argumentative Meghan is hoping that baby number three will help put things back to how they were. But everyone has their secrets, and Meghan has plenty of them.

Learning that Meghan is pregnant again, she finally gets up the courage to approach her. Coincidentally, their due dates are within the same month, so that gives Agatha another thing in common with her. Little does Meghan know, a seemingly innocent exchange with a grocery store employee would completely change her life forever.

I love the alternating perspectives in this book. Back and forth between Agatha and Meghan. Robotham does an incredible job developing these two female characters. The differences in their pregnancies, state of mind, and their lives are so perfectly illustrated and described to the reader. There were many times this story got in my head and gave me the creeps. The level of obsession and delusion that Agatha was reaching – in regards to her “relationship” with Meghan – made my skin crawl.

This book had twists and thrills. It was a gripping page turner and I loved it. This really brings into question, what do you really know about someone and their life? We all think we know each other well through social media, but that’s the sides of them they want us to see. The secrets and lies throughout this book kept you on your toes! I will definitely be reading more of Robotham’s work after this one.

If you want a gripping psychological thriller with in depth character development, then I’d highly recommend this one to you! The King wasn’t lying when he said that Robotham was the absolute master.

A big thanks to Scribner Books for the advanced copies in exchange for our honest reviews!

2 thoughts on “#CJSReads2017 – The Secrets She Keeps by Michael Robotham”