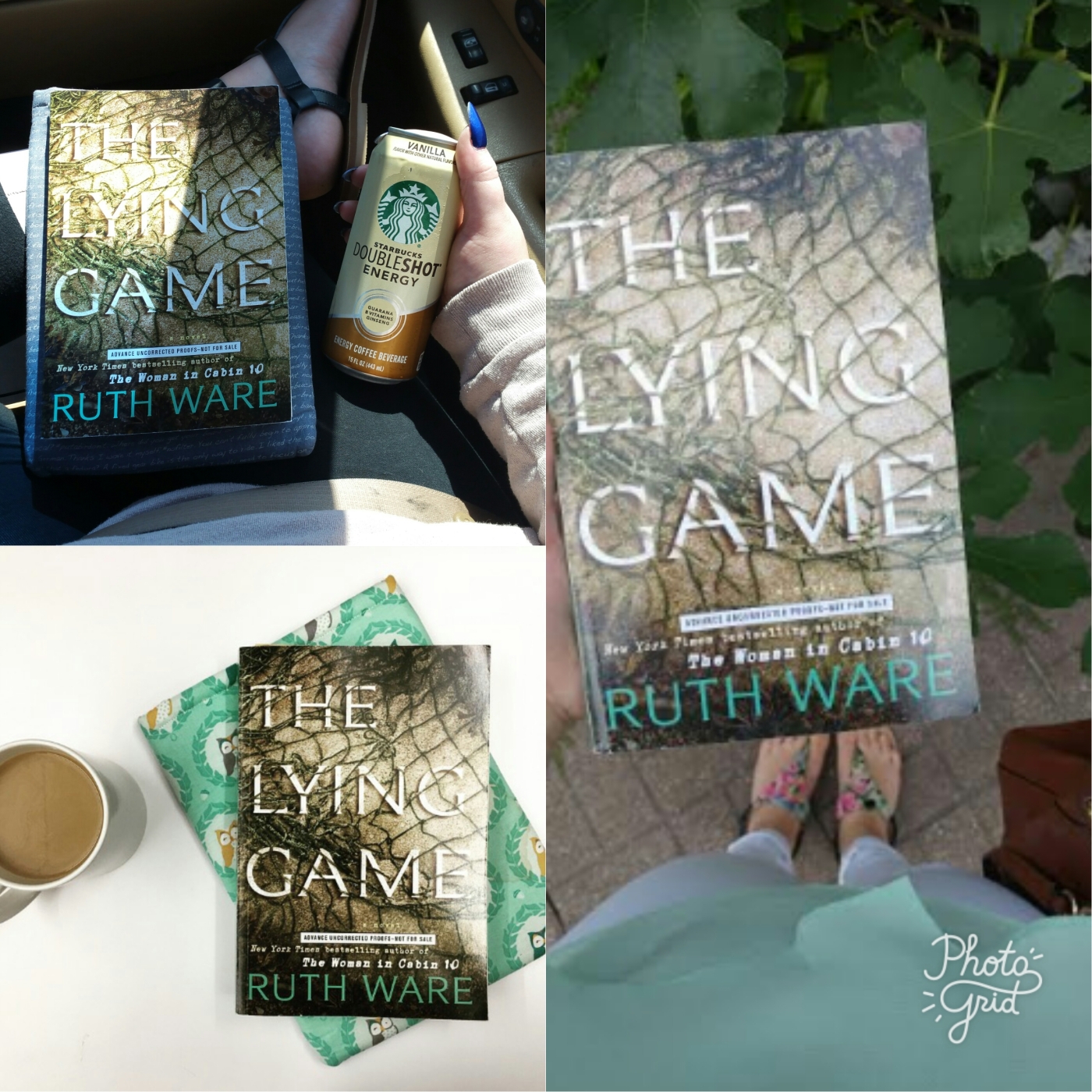 Happy release day to the anticipated third book from Ruth Ware! THE LYING GAME is out on shelves today!

Big thanks to Gallery Books for sending the #CJSReads2017 trio advanced copies in exchange for our honest reviews (and providing giveaway copies!)

Here’s what we thought of this fast pace, lighter suspense novel. 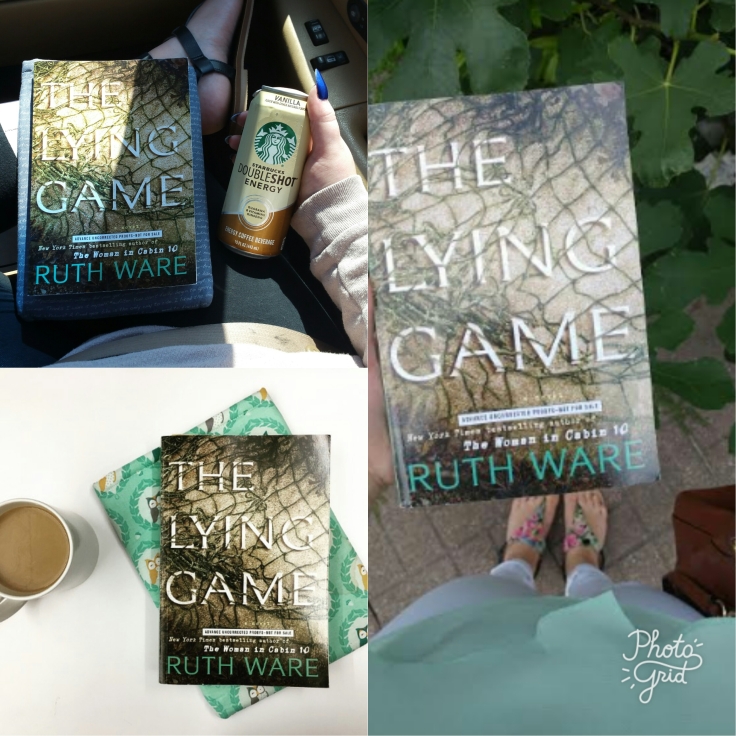 They met at boarding school: Isa, Fatima, Kate and Thea. Kate and Thea teach newcomers, Isa and Fatima, The Lying Game. There are rules to be followed and points to earn. This game makes many enemies for them, but they don’t care – they’re a fearsome foursome to be reckoned with and as long as they have each other, they don’t need anyone else. An unfortunate incident surrounding the death of their art teacher (Kate’s father) has the girls expelled from school in their final year. They promise to always come if one sends a message, “I need you.” And years later, they get one from Kate and head back to the area where they all met. Seems their past is catching up with them when a body turns up.

I’ve been a fan of Ruth Ware since In a Dark, Dark Wood and Woman in Cabin 10 so I was more than thrilled to receive an early copy of this book. I love Ruth’s writing style – the short chapters, the concise back and forth in time and the characters that she creates. She did a remarkable job of reminding us of our childhood friends and how our “cliques” felt powerful and the bond that you create with them. This particular book had me flipping pages with a need to know urgency. But then I found myself quickly losing interest. Told strictly through Isa’s POV, I didn’t feel myself connecting with any of the characters. The ending was a bit rushed for me and the twist for me was that I saw the entire ending coming! I’ve seen a few people compare this book to the show Pretty Little Liars. Not my favorite show, which may be why this isn’t my favorite book either. Hard to say!

No matter what, I will always continue to pick up Ruth Ware’s books. This is a moderately paced thriller that’s an easy, quick read. While it didn’t quite hit home for me like her other two books did, it may for you!

I’m just gonna come right out and say it.  I have never read a novel by Ruth Ware.  I know, I know, what kind of thriller lover am I?  I have them all purchased, sitting on my shelf, waiting patiently for me but I am a slave to my TBR pile and hadn’t been able to read them yet.  So, I was more than thrilled when #cjsreads made The Lying Game by Ruth Ware a July title.

The novel opens with a body being discovered and Isa, a new mother, receiving a text from her childhood friend.  A text she knows to always respond to.  A text she hoped she would never get.  Travelling to Salten, a boarding school she spent a year in, she meets up with Kate and two other friends who all went to the school; notorious in their time, they were known for playing The Lying Game.  A game blurred with reality, and soon, the girls realize that their past is not as buried as they had hoped.

From the first pages, I was pretty much hooked. It sort of had that chick lit, Pretty Little Liars vibe that I enjoy in a thriller.  Imagine Big Little Lies and a sort of darker Gossip Girl.  I really enjoy where I can get that sort of “feeling” from a piece of fiction for an adult, especially since it usually can only be found in the realm of YA.

I found myself flying through the pages, which were narrated by Isa, and was gripped trying to figure out what had went on in their past (which was also explored).  I had plenty of theories.   This one peaked for me in the middle, it had a sort of “SAY WHAT” moment and I was completely perplexed.

However, I found the ending to be a little lackluster.  It sort of went the tired and true route and I felt a little disappointed.

Overall, I felt like this one was fast paced and juicy enough to be a perfect read for the beach.

Here is the anticipated third book from Ruth Ware! THE LYING GAME is definitely different than her other two books (IN A DARK DARK WOOD and WOMAN IN CABIN 10) – I love her writing style and this one was very fast paced. If you’re a fan of Pretty Little Liars then this will be on you’ll have to look up!

We start out with a body being discovered by a woman walking her dog – when the dog jumps into the water to retrieve what appeared to be a stick and ended up being sometimes much more horrific. Shortly after the body is discovered, three old friends, Fatima, Thea, and Isa, all receive a text message they hoped would never come. Three simple words from their friend Kate, “I need you”.

The four friends had met when they were in Salten boarding school. They were notorious for playing a game they called, The Lying Game. There were simple rules to The Lying Game:
Rule 1: Tell a lie.
Rule 2: Stick to your story
Rule 3. Don’t get caught.
Rule 4. Never lie to each other.
Rule 5. Know when to stop lying.

This game had major consequences when they were all expelled in their last year of school. They were expelled under suspicious circumstances surrounding the death of Kate’s father – who was the school’s art teacher.

This book had great pacing throughout. It’s definitely one that sucks you in right away! This book is told completely through Isa’s point of view. We’re brought through events of their past and there were plenty of shocking moments. The ending though was kind of a let down in comparison to the rest of the book.

I think that I enjoyed this one more than IN A DARK, DARK WOOD and about on par with how much I liked WOMAN IN CABIN 10. If you want a lighter suspense book then I’d say this is perfect for you! A great summer read.

Anyone else excited for this one to release?? Any big die hard Ruth Ware fans?