One of our more anticipated reads for August!

Thanks to William Morrow for the copies in exchange for our honest reviews!

THE GOOD DAUGHTER by Karin Slaughter released August 8th, and you guys need to go out and get this book.

This was Sam’s and my first time reading a Karin Slaughter book, and we’re both so mad we haven’t picked one up sooner. 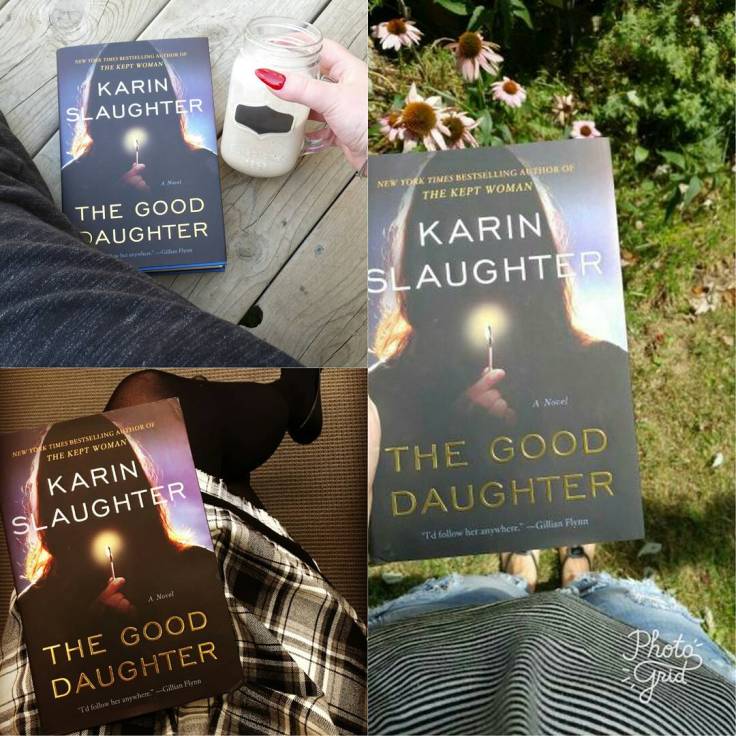 ALL THE STARS – ALL OF THEM

I’m not going to bother with any small synopsis here like I usually do with my reviews. I’m just going to get right into the nitty gritty. Karin Slaughter SLAYS. Total woman crushing on her. I started my love affair with her writing after reading Pretty Girls. Now, I can’t get enough of her and The Good Daughter just reinforces how I feel.

I haven’t had this much invoking of emotions while reading a book in a long time. I laughed, I cringed and I ugly cried (my poor co-workers – “What’s wrong?” they ask…. Me: “OMG THIS BOOK, I CAN’T….” Weird look as they slowly back away from this crazy woman I have become). I was fully invested in EVERY character. So much so that I didn’t even bother trying to figure out any twists like I usually do when I’m reading a thriller. Slaughter’s ability to draw you in so completely is a testament to how wonderfully she builds her worlds and the characters that live in them. I love that she went back to a small town, which I think is where some of her best writing occurs. For me, this thriller isn’t about the horrid acts that were committed, or who did what and when, but more about the complex characters involved and how they deal with their emotions. Cutting away to the past little by little to give you a bigger picture, slowly unwrapping this gifted box where all your feeling live. I’m spent. I feel like I just got off a roller coaster of emotions and am dizzy with words.

To sum up, READ THIS BOOK. A thriller with fascinating characterization, an interweaving plot that keeps you guessing and gasping, a setting in a small town that most of us are familiar with and emotional reactions that you can feel tugging at your heart strings and tear ducts. What more could you ask for? If you haven’t read anything by this author, then you really need to get out and get Slaughtered. You can thank me later. This book is Slaughter at her best, in my opinion.

Everyone needs to stay calm regarding the piece of information

I am about to reveal.

I have never read a Karin Slaughter book before.

Usually when I reveal such news, the first thing people say to me is “WHAT!!??  Karin Slaughter is EVERYTHING!”

Now that I have read my first Karin Slaughter book, her newest standalone called The Good Daughter, I would say I undeniably agree.

The novel opens with the introduction of two sisters, Charlotte (Charlie) and Samantha (Sam- solid name) whose family is torn apart by a horrific act of violence.  One girl was left behind, one girl ran away to safety and nothing was the same.  Twenty-eight years later, Charlie is a lawyer and witnesses another act of violence that opens old floodgates and makes her past traumas emerge.  Now that she is a witness, she must confront everything she has worked hard to forget and watch as the truth about the crime that changed the course of her family bubbles to the surface.

This will be a completely spoiler free review, which is very hard for me, especially since I want to scream about this one from the rooftops.  But, I will keep my scream to a whisper and try my best to remain vague.  My apologies in advance if I sound jumbled or unclear, once you have read this on, you will understand!

One of the first things I need to note is the quality of Slaughter’s writing.  Her prose is clean and finely detailed.  I have never read a work by an author that can be both raw in language and impeccable in execution and both graphically gory and tastefully written. Her characters were multi-layered, diverse, complex and completely realistic.  Truly, I have never read a piece of crime fiction that felt so real.   Going back and forth through time, the reader watches the story unfold in the present and then gets to piece together the events that transpired twenty-eight years prior.

The pacing of this one was fantastic; after a slew of busy weekends, I sat down to finally give this one my full attention and finished all 500 pages easily within the course of two sittings.   I was completely entertained.

The plot itself felt like it was divided into sections, which I loved.   Not only sections within the time periods, but also sections within the character events and, it seemed, specific turning points in character dynamics. As the plot progressed, I felt more and more connected to these characters and as their stories thickened, I felt completely entranced, experiencing the story with them.   Now, for a story to make you feel THAT?  That is some seriously amazing writing.

This is absolutely a 5 star read for me and I will be running to pick up Slaughter’s other works.  From what I hear, I should be starting with Pretty Girls and then working my way to the Grant County series.

This was my first Karin Slaughter novel – I know, as a fan of the thriller genre I’m ashamed that it’s taken me so long. I was not disappointed! THE GOOD DAUGHTER is her newest standalone novel and I can’t wait to read more from her. At just over 500 pages, this mystery/thriller is a surprisingly fast read!

This begins in 1989 – two armed men break into the home of Samantha and Charlotte “Charlie” Quinn. They force the two girls out into the woods and leave their mother dead. They believe the attack was because of their father, Rusty Quinn’s job as a defense attorney. He would defend those that no one deemed as deserving and some of the worst criminals. This attack left the family broken.

Fast forward 28 years and Charlie has now followed in father’s footsteps and has become a lawyer. She stays in their small home town to work instead of moving off to the big cities. Things take a turn when Charlie finds herself as a witness to a school shooting. The case seems pretty open and shut – they found Kelly, a teenager with some mental disabilities, with the gun in front of two of the dead victims. However, when Sam returns to Pikeville, they both find themselves caught up in this case. It begins to bring back deep buried memories from that night 28 years ago when their family was attacked.

First of all, this book was so good! I’m so mad I haven’t picked up a Karin Slaughter novel yet! It was full of twists and turns – definitely not a predictable thriller. This was a very character driven novel but that did not take away from the plot or suspense. Slaughter does an incredible job creating these characters and getting the reader caught up in them. The trauma that Charlie and Sam endure as children and how it later affects them in adulthood. As well as how this had changed their relationship as a family – Rusty included. As a warning, there are some topics that not all readers will want to experience. Some very gory and violent scenes as well as rape – so just as a fair warning for potential readers.

I think that all of the storylines – the events on the night of the break in, the school shooting case, and the relationship between the sisters are all equally intriguing. The complexity of each story and the details that go into them amazed me. Sometimes in books with multiple storylines happening, one can get lost in the shuffle, but Slaughter did a great job keeping them all in focus.

If you love Karin Slaughter, then this is a no-brainer, but if you want a character driven, complex, and suspenseful read then look no further! You need to grab a copy of THE GOOD DAUGHTER. Now, I’m off to grab more of her books!

What are some of your favorite Karin Slaughter books? I’m starting PRETTY GIRLS soon!