It’s the first day of September and we’ve already got an #allthebookreviews title!

Thanks to Prometheus Books for the advanced copies in exchange for our honest reviews. 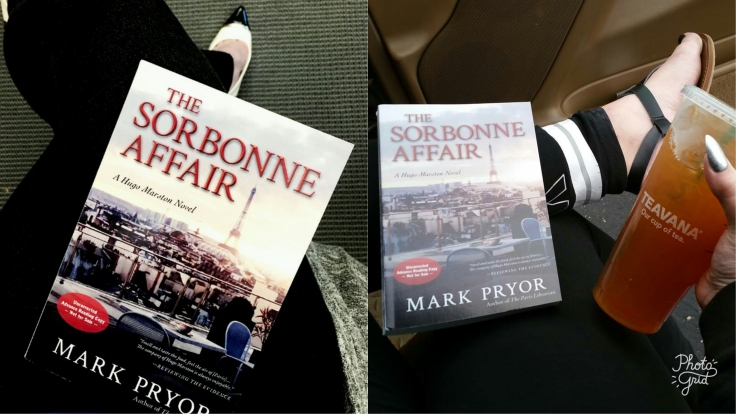 Successful novelist Helen Hancock finds a spy camera in a painting in her hotel room.  Because of her connections, she contacts the embassy who then sends Hugo Marston to help.  Suddenly bodies start piling up and secrets start coming out – some in video form.  Working with his trusted friend, Tom, to take some interesting measures to solve this case, their own pasts start creeping up on them as well.

Book 7 in the Hugo Marston series, luckily this can be read as a stand alone!  Phew!  I’m sure there were some nuances that I didn’t catch from not reading the first seven books in this series, but if that was the case, I barely noticed.  My favorite part about this book was the interactions between the characters.  There was a lot of sarcastic humor that I absolutely appreciated.  I felt it was fairly obvious where the book was going and figured out the whodunit portion very early.  Overall, a fun, quick read that had multiple characters to choose from – it’s like playing Clue, but in France!

Do you read books based in other countries trying to use their accents?  Well I do and my French in-my-head accent is HORRENDOUS! Haha!

THE SORBONNE AFFAIR by Mark Pryor is book 7 in the Hugo Marston series, but it can be read as a standalone. Marston is a former FBI profiler and he is working at the US Embassy in Paris, France. When a spy camera is found in an American writer’s hotel room, and then the bell hop is murdered, Hugo is on the case.

American novelist, Helen Hancock, is in Paris to research her upcoming book. She’s also teaching a writing class. One day she discovers that her hotel room has a camera hiding in it and she notifies the US Embassy. The Embassy sends Hugo Marston to investigate the bugging. Soon after, the bellhop, an American citizen, is found murdered in the hotel stairwell. When it’s discovered that his computer was set up to record Helen, it appears that nothing of importance was recorded. However, shortly after, a scandalous sex tape of Helen and one of her students is released onto the internet.

With more bodies appearing, all American citizens, and all are connected to Helen. Will Hugo be able to solve the case and stop the murderer – before he becomes the next target?

This book starts off with action and keeps a good pace throughout. I did enjoy the characters, but with it being book 7 in the series, I did feel like I was missing some key pieces of their history and relationships. There were some twists thrown in and the mystery was great. Pryor definitely had me turning to pages to figure out who did it. In the end, it all tied together really well and I felt it was a fitting end!

Overall, this was an enjoyable read and I loved the pacing. I’ll always love a thriller with some International intrigue and politics thrown in. Don’t let that turn you away though – the Embassy is about all that you get in connection to politics! I will have to go back and read some of the other books to truly connect with and appreciate the characters.

This was a good International mystery and I definitely will revisit the other Hugo Marston books.