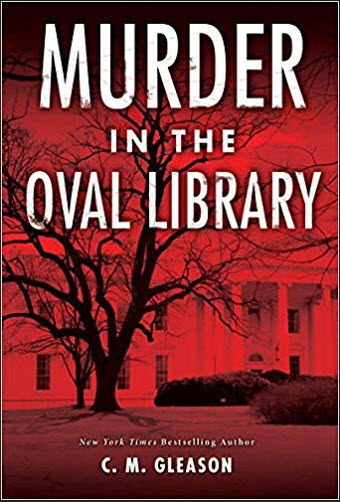 Starting September off with some book tours and book reviews! It’s gonna be a busy month with some fantastic upcoming releases 🙂

Thanks to TLC Book Tours and Kensington Books for the free copy in exchange for my honest review.

MURDER IN THE OVAL LIBRARY – C.M. Gleason (out now!)

April 13, 1861: Rebel troops are across the Potomac River, only 800 feet from the White House and President Lincoln—but a murderer is even closer . . .

With the Confederate Army firing on Fort Sumter, the Civil War has begun—and an invasion of Washington, DC, from Secessionist Virginia seems imminent. As the population evacuates, the President is in desperate need of men to defend the capital.

Lincoln’s trusted aide, Adam Speed Quinn, and Quinn’s old friend from the Bloody Kansas conflict, Senator Jim Lane, hastily assemble a motley crew of just over a hundred men and garrison them in the East Room at the White House. Dubbed the Frontier Guard, these rough-and-tumble patriots steel themselves for the inevitable attack.

But even as dawn breaks with no Rebel strike, a single act of violence intrudes within the White House. One of the Frontier Guard lies dead in the oval library, throat slit ear to ear. There is a murderer among them.

Lincoln promptly assigns Quinn to deal with the matter, who is in turn aided by journalist Sophie Gates and Dr. George Hilton. And to Quinn’s chagrin, the Southern belle Constance Lemagne insists on being involved in the investigation as well. But when Dr. Hilton examines the body, he makes a startling discovery that overturns all Quinn’s assumptions about the murder. With his president at grave risk from without and within, Quinn must act quickly to catch the White House killer . . .

For those that love a good historical fiction novel, then this one is perfect for you! This is set in the late 1800’s – Lincoln has just been elected President and the US is in turmoil. The country is on the brink of the Civil War with the South beginning to succeed, and to make things worse, a body is found in the library of the White House.

Lincoln assigns Adam Quinn to the case. He is accompanied by Sophie Gates and Dr. George Hilton, they try to quickly unravel the mystery with mounting pressure as the Confederates start to cross into Northern territory. I really enjoyed that Gleason sprinkled the story with actual historical figures – that added another level of authenticity to the novel.

I enjoyed the mystery element and the setting. I feel like I never really see historical fiction novels about this time period – all the ones lately take place in Victorian England (not complaining about that!). I think I need to go back and read book one to get to know the characters a little better, but I would highly recommend picking this series up. I also enjoyed the Author’s Note at the end of the book.

C. M. Gleason is the New York Times and USA Today bestselling author of the Stoker & Holmes series for teens, in addition to the Lincoln White House mysteries. She lives in the Midwest and is hard at work on her next novel. Learn more at: cmgleason.com.