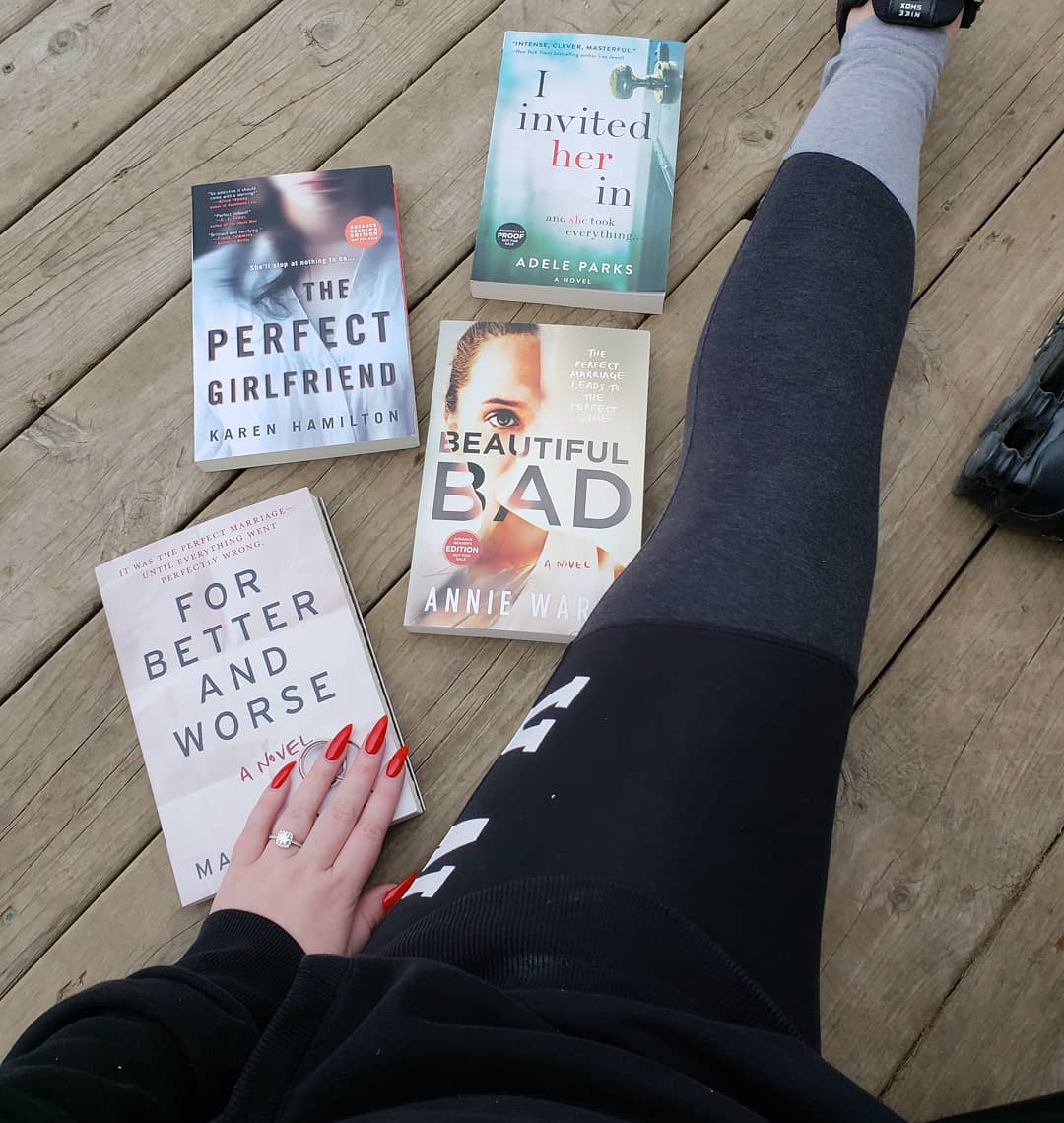 You know it’s a good day when you get a box of books delivered!

Thanks to Harlequin Books and the imprints Graydon House, MIRA, and Park Row Books for the free copies in exchange for my honest reviews.

The #allthebookreviews duo will be busy with our #ATBR2019 list!

FOR BETTER AND WORSE – Margot Hunt (out now!)

FOR BETTER AND WORSE – Margot Hunt

On their first date back in law school, Natalie and Will Clarke bonded over drinks, dinner and whether they could get away with murder. Now married, they’ll put the latter to the test when an unchecked danger in their community places their son in jeopardy. Working as a criminal defense attorney, Nat refuses to rely on the broken legal system to keep her family safe. She knows that if you want justice…you have to get it yourself.

Shocked to discover Nat’s taken matters into her own hands, Will has no choice but to dirty his, also. His family is in way too deep to back down now. He’s just not sure he recognizes the woman he married. Nat’s always been fiercely protective, but never this ruthless or calculating. With the police poking holes in their airtight plan, what will be the first to fall apart: their scandalous secret—or their marriage?

I INVITED HER IN – Adele Parks

Imagine the worst thing a friend could ever do.

When Mel receives an unexpected email from her oldest friend Abi, it brings back memories she thought she had buried forever. Their friendship belonged in the past. To those carefree days at university.

But Abi is in trouble and needs Mel’s help, and she wants a place to stay. Just for a few days, while she sorts things out. It’s the least Mel can do.

After all, friends look out for each other, don’t they?

I Invited Her In is a blistering tale of wanting what you can’t have, jealousy, and revenge from Sunday Times best-seller Adele Parks.

In the most explosive and twisted psychological thriller since The Woman in the Window, a beautiful marriage turns beautifully bad.

Things that make me scared: When Charlie cries. Hospitals and lakes. When Ian drinks vodka in the basement. ISIS. When Ian gets angry… That something is really, really wrong with me.

Maddie and Ian’s romance began with a chance encounter at a party overseas; he was serving in the British army and she was a travel writer visiting her best friend, Jo. Now almost two decades later, married with a beautiful son, Charlie, they are living the perfect suburban life in Middle America. But when a camping accident leaves Maddie badly scarred, she begins attending writing therapy, where she gradually reveals her fears about Ian’s PTSD; her concerns for the safety of their young son, Charlie; and the couple’s tangled and tumultuous past with Jo.

From the Balkans to England, Iraq to Manhattan, and finally to an ordinary family home in Kansas, sixteen years of love and fear, adventure and suspicion culminate in The Day of the Killing, when a frantic 911 call summons the police to the scene of a shocking crime.

YOU’VE NEVER READ A LOVE STORY AS TWISTED AS THIS. Juliette loves Nate. She will follow him anywhere. She’s even become a flight attendant for his airline, so she can keep a closer eye on him. They are meant to be. The fact that Nate broke up with her six months ago means nothing. Because Juliette has a plan to win him back. She is the perfect girlfriend. And she’ll make sure no one stops her from getting exactly what she wants. True love hurts, but Juliette knows it’s worth all the pain…

Juliette has everything going for her: she’s young, pretty, and driven, and she’s training for an exciting new career as a flight attendant.

The darkness in her past doesn’t matter, because she’s moved beyond all that, and she’s building a great new life for herself-one that will impress her ex-boyfriend, Nate, who left her in a foolish moment of commitment-phobia, one that he surely regrets now. But he’ll be so proud of her once he sees how much she’s grown. And he will see her. After all, he’s a pilot at the very same airline where Juliette is training.

What kind of man wouldn’t appreciate the effort Juliette has taken to win Nate back? She cleans his apartment when he’s not there, and makes sure to leave all his favorite foods in the fridge. It’s only a matter of time before he leaves his airheaded new girlfriend and realizes Juliette is the only one for him.

He will realize it. Juliette will make sure of it. After all, she is the perfect girlfriend.