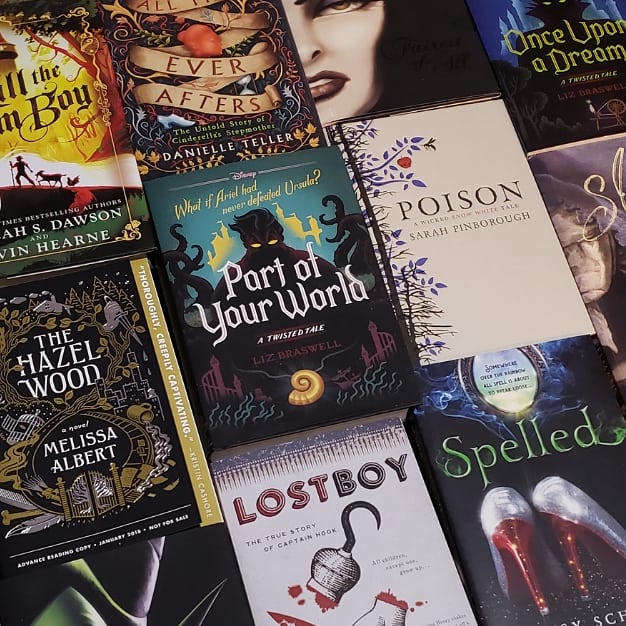 Another collage coming at you!

While I do love my thrillers and horror novels, I have a soft spot for the fairytale retellings. Obviously I’m more in favor of the darker ones or the villain origins – give me all the villains and all the tragedies that made them who they are!

Once upon a time, in a faraway kingdom, a hero, the Chosen One, was born . . . and so begins every fairy tale ever told.

This is not that fairy tale.

There is a Chosen One, but he is unlike any One who has ever been Chosened.

And there is a faraway kingdom, but you have never been to a magical world quite like the land of Pell.

There, a plucky farm boy will find more than he’s bargained for on his quest to awaken the sleeping princess in her cursed tower. First there’s the Dark Lord who wishes for the boy’s untimely death . . . and also very fine cheese. Then there’s a bard without a song in her heart but with a very adorable and fuzzy tail, an assassin who fears not the night but is terrified of chickens, and a mighty fighter more frightened of her sword than of her chain-mail bikini. This journey will lead to sinister umlauts, a trash-talking goat, the Dread Necromancer Steve, and a strange and wondrous journey to the most peculiar “happily ever after” that ever once-upon-a-timed.

Seventeen-year-old Alice and her mother have spent most of Alice’s life on the road, always a step ahead of the uncanny bad luck biting at their heels. But when Alice’s grandmother, the reclusive author of a cult-classic book of pitch-dark fairy tales, dies alone on her estate, the Hazel Wood, Alice learns how bad her luck can really get: her mother is stolen away―by a figure who claims to come from the Hinterland, the cruel supernatural world where her grandmother’s stories are set. Alice’s only lead is the message her mother left behind: “Stay away from the Hazel Wood.”

Alice has long steered clear of her grandmother’s cultish fans. But now she has no choice but to ally with classmate Ellery Finch, a Hinterland superfan who may have his own reasons for wanting to help her. To retrieve her mother, Alice must venture first to the Hazel Wood, then into the world where her grandmother’s tales began―and where she might find out how her own story went so wrong

ALL THE EVER AFTERS – Danielle Teller – See my review here!

A luminous reimagining of the classic fairy tale Cinderella, told from the perspective of Agnes, the beautiful girl’s “evil” stepmother

We all know the story of Cinderella. Or do we?

As rumors about the cruel upbringing of beautiful newlywed Princess Cinderella roil the kingdom, her stepmother, Agnes, a woman who knows all too well about hardship, privately records the true story. But what unfolds is not the princess’s history. The tale Agnes recounts is her own.

A TWISTED TALE: PART OF YOUR WORLD – Liz Braswell

What if Ariel had never defeated Ursula? Five years after the (twisted) events of the film, Ariel is now the queen of Atlantica, and Ursula is running Eric’s kingdom on land. But when the sea witch threatens Atlantica once more, Ariel finds herself returning to a world (and a prince) she thought she’d left behind forever.

There is one version of my story that everyone knows. And then there is the truth. This is how it happened. How I went from being Peter Pan’s first—and favorite—lost boy to his greatest enemy.

Peter brought me to his island because there were no rules and no grownups to make us mind. He brought boys from the Other Place to join in the fun, but Peter’s idea of fun is sharper than a pirate’s sword. Because it’s never been all fun and games on the island. Our neighbors are pirates and monsters. Our toys are knife and stick and rock—the kinds of playthings that bite.

Peter promised we would all be young and happy forever.

FAIREST OF ALL – Serena Valentino

The tale of the young princess and her evil stepmother, the Wicked Queen, is widely known. Despite a few variations from telling to telling, the story remains the same—the Queen was jealous of the girl’s beauty, and this jealousy culminated in the Queen’s attempt on the sweet, naive girl’s life.

Another tale far less often spoken of is the one that explains what caused the Queen to become so contemptuously vile. Still, some have attempted to guess at the reason. Perhaps the Queen’s true nature was that of a wicked hag and her beautiful, regal appearance a disguise used to fool the King. Others claim that the Queen might have hated the girl for her resemblance to the King’s first wife. Mostly, the Queen is painted as a morally abhorrent woman who never loved another being during the course of her miserable life.

In fact, the theories about exactly what cause the Queen’s obsessive vanity and jealous rage are too numerous to catalog. This book recounts a version of the story that has remained untold until now. It is a tragic tale of love and loss, and it contains a bit of magic. It is a tale of the Wicked Queen…

Poison is a beautifully illustrated retelling of the Snow White story which takes all the elements of the classic fairy tale that we love (the handsome prince, the jealous queen, the beautiful girl and, of course, the poisoning) and puts a modern spin on the characters, their motives and their desires. It’s fun, contemporary, sexy, and perfect for fans of Once Upon a Time, Grimm, Snow White and the Huntsman and more.

Somewhere over the rainbow, all spell is about to break loose…

Fairy Tale Survival Rule No. 32: If you find yourself at the mercy of a wicked witch, sing a romantic ballad and wait for your Prince Charming to save the day.

Yeah, no thanks. Dorthea is completely princed out. Sure being the crown princess of Emerald has its perks—like Glenda Original ball gowns and Hans Christian Louboutin heels. But a forced marriage to the charming brooding prince Kato is so not what Dorthea had in mind for her enchanted future.

Talk about unhappily ever after.

Trying to fix her prince problem by wishing on a (cursed) star royally backfires, leaving the kingdom in chaos and her parents stuck in some place called “Kansas.” Now it’s up to Dorthea and her pixed off prince to find the mysterious Wizard of Oz and undo the curse…before it releases the wickedest witch of all and spells The End for the world of Story.

A TWISTED TALE: ONCE UPON A DREAM – Liz Braswell

What if the sleeping beauty never woke up?

It should be simple—a dragon defeated, a slumbering princess in a castle, a prince poised to wake her. But when the prince falls asleep as his lips touch the fair maiden’s, it is clear that this fairy tale is far from over.

With a desperate fairy’s last curse controlling her mind, Princess Aurora must escape from a different castle of thorns and navigate a dangerously magical landscape—created from her very own dreams.

Aurora isn’t alone—a charming prince is eager to join her quest, and old friends offer their help. But as Maleficent’s agents follow her every move, Aurora must discover who her true allies are and, moreover, who she truly is.

Time is running out. Will the sleeping beauty be able to wake herself up?

Lucinda, a penniless English orphan, is abused and exploited as a cinder-sweep by her aristocratic relatives. On receiving her sole inheritance—a pair of glass-beaded slippers—she runs away to France in pursuit of an officer on whom she has a big crush. She joins the baggage train of Louis XIV’s army, survives a terrible massacre, and eventually finds her way to Paris. There she befriends the man who will some day write the world’s most famous fairy tale, Charles Perrault, and tells him her life story.

There is more: a witch hunt, the sorry truth about daydreams, and some truly astonishing revelations, such as the historical facts behind the story of the Emperor’s new clothes, and a perfectly reasonable explanation for the compulsion some young women have to kiss frogs.