BEFORE THE DEVIL FELL – Neil Olson 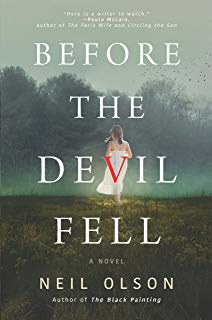 Will Connor returns to his hometown, a village north of Boston, to care for his injured mother. He’s kept his distance from the town since high school, but once home he finds himself reexamining a horrific incident that took place during one of his mother’s “spirit circles.” His mother had embraced the hippie generation’s fascination with New Age and the arcane, but the unexpected death of a close friend put an end to the meetings of the modern-day coven.

As Will looks deeper into his family’s history he discovers that her practices weren’t so much a passing fad but the latest link in a long tradition of New England witchcraft, which still seems to hold a strange power over the town. Will hopes that unearthing the facts about the death will put his questions to rest, but there are those willing to resort to violence to keep those secrets buried. 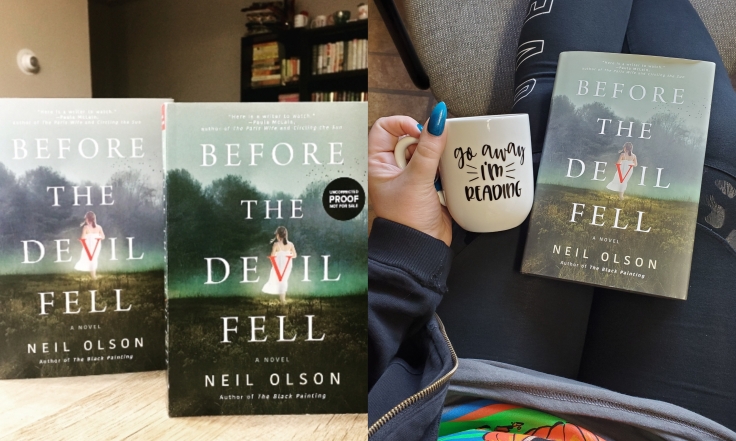 I absolutely love the premise of this book.  Small towns with ties to witchcraft, the unknown, everybody in everybody’s business stemming back from decades of families that are tied to the town.  This is one of those books I like to call a “surface read”.  (Ok, I kind of just made that up but that’s gonna be a thing for me now I think.)

What I mean by that, is that it’s a fun, witchy read that has a tiny bit of creep factor, but really just reads as the story is laid out.  There’s no big deep part to it – for example, I would’ve LOVED to have known more about the backstory of the families and how some of these things came to pass.  More on the weird deaths that occurred when Will and Sam were younger. (btw, LOVE Sam!)

I also noticed that sometimes Abby would be Abigail – and I don’t mean in the terms of whoever was speaking to her but when she was speaking to the same person, the dialogue would be back and forth between the names and for some reason that irritated me.  A small nit I realize but something I noticed.  I’m a big person about consistency (thank you paralegal job – insert eye roll).

I think that to just take the story as it is, it’s a fun and easy read and on the lighter side of a thriller/witchy kind of read so if that’s your jam – get your biscuit ready and slather it on.

This was just what I needed for this time of year! Witchcraft, mystery, suspense, some twists and turns, and all of it wrapped up in a quick read. BEFORE THE DEVIL FELL had all the elements I was looking for. I would classify this as more of a suspense and mystery than a fast-paced thriller, but that doesn’t mean it isn’t a quick read. This was also incredibly creepy and very atmospheric. The author transports us into that small town and we can feel how suffocating it can be when everyone seems to know something that you don’t. What secrets are they hiding? How far are they willing to go to keep them hidden?

Will returns to his hometown to care for his injured mother. He has always avoided going back home because of a horrific death that had occurred there when he was a child. Now that he’s back, he can’t help but feel that there is more to the death than what he was originally told. He tries to uncover the truth – but what really happened all those years ago?

Overall, if you’re looking for a quick and creepy read, then this should be on your TBR. There were a couple parts that felt a little bogged down but that didn’t take away from the reading experience for me. If you like witchcraft and covens, then this is perfect for you.