Thanks to St. Martin’s Press for the free early copy in exchange for my honest review

We read, and enjoyed, THE OTHER GIRL by Erica Spindler – you can see that review here! 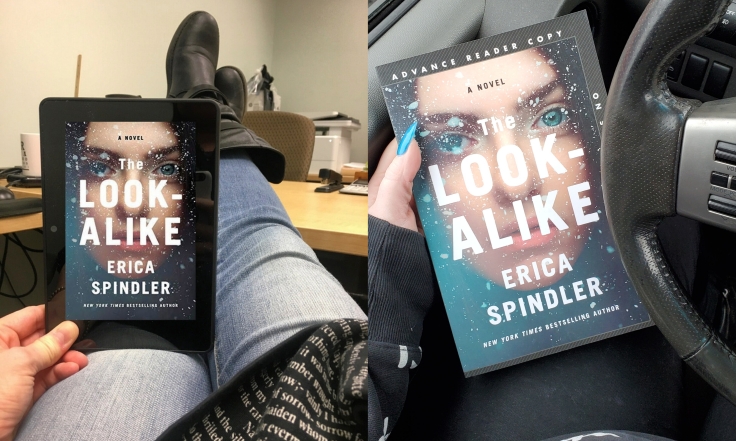 From the New York Times bestselling author of The Other Girl and Justice for Sara comes a thrilling psychological drama about a woman who believes she escaped a brutal murder years ago—but does anyone else believe her?

Sienna Scott grew up in the dark shadow of her mother’s paranoid delusions. Now, she’s returned home to confront her past and the unsolved murder that altered the course of her life.

In her mother’s shuttered house, an old fear that has haunted Sienna for years rears its ugly head —that it was she who had been the killer’s target that night. And now, with it, a new fear—that the killer not only intended to remedy his past mistake—he’s already begun. But are these fears any different from the ones that torment her mother?

As the walls close in, the line between truth and lie, reality and delusion disintegrate. Has Sienna’s worst nightmare come true? Or will she unmask a killer and finally prove she may be her mother’s look-alike, but she’s not her clone?

Well… this hits all the marks of most lighter thrillers.  Old case unresolved.  Girl comes back to her hometown. Falls in love with stranger with a remarkable quickness. Cast of suspects. Delusional mom. Rushed ending.

The book started off pretty strong.  Flashbacks to Sienna the night she discovered the murder.  Her disruptive home life due to her mother’s mental illness.  She arrives back to her hometown after a decade away for no reason other than wanting to be back with her family.  Look, this isn’t a bad read – it’s an easy read and on course with what I would consider a lighter thriller.  For someone like me who reads a ton of thrillers, I like mine a bit more dark, a little more complex and even though I don’t mind predictability sometimes, this trope has been long done over and over.  While the first half kept me interested, that quickly faded in the last half and I found myself finishing just to finish.

Also, the epilogue wrapped things up into a nice pretty bow and sometimes it works for me, sometimes it doesn’t.  If you like the lighter thriller or need something easy in between more darker, dare I say .. sophisticated.. reads, then this is a good one to go through.  I’ve read this author before and liked The Other Girl a lot so I’ll definitely be keeping an eye out for another read by her.

I’m really torn on this one – this was the perfect thriller for those that prefer the lighter side of the genre. It was a fast read, good pacing, enough to entice me, but it wasn’t one that I would say completely wowed me. I definitely can agree with the glowing reviews for this one from Erica Spindler, but I can also agree with some points on the less than favorable reviews.

THE LOOK-ALIKE has all of the elements you want and almost expect in a thriller. There aren’t a ton of twists and turns, but the reader doesn’t quite know what’s going on as the investigation progresses. I liked the mystery and I thought Sienna was an intriguing character to follow. We do get to see some of Sienna’s flashbacks to the murder scene she came across and now in the present day a decade later when she decides to return home. The case gets reopened and she thinks that the killer could still be keeping an eye on her now that she is back.

The author ties everything up nicely at the end for the readers, so if you don’t like ambiguous endings then this will be perfect. Like I said, this wasn’t a bad read. I can definitely see people picking this one up and flying through it. While it’s not my favorite thriller, I still enjoyed the story and would recommend this to those that want a lighter thriller.

One thought on “#ATBR2020 – The Look-Alike by Erica Spindler”