Recently released! A new debut novel and the beginning of a new crime fiction novel 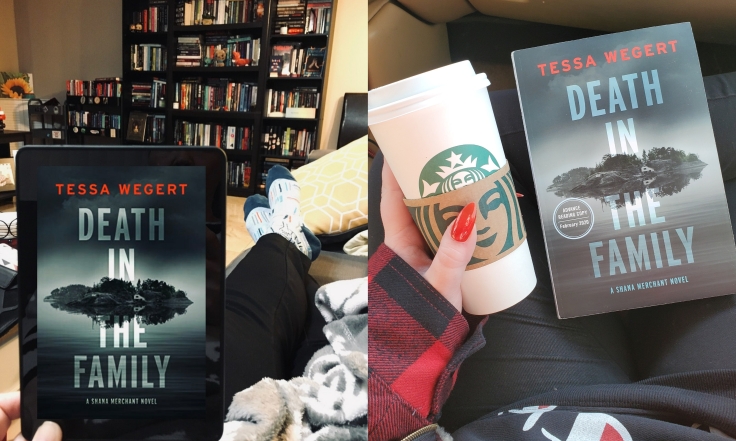 A storm-struck island. A blood-soaked bed. A missing man. Senior Investigator Shana Merchant believes it all adds up to a killer in their midst—and that murder is a family affair.

But as a nor’easter bears down on her new territory, Shana and fellow investigator Tim Wellington receive a call about a man missing on a private island. Shana and Tim travel to the isolated island owned by the wealthy Sinclair family to question the witnesses. They arrive to find blood on the scene and a house full of Sinclair family and friends on edge.

While Tim guesses they’re dealing with a runaway case, Shana is convinced that they have a murder on their hands. As the gale intensifies outside, she starts conducting interviews and discovers the Sinclairs and their guests are crawling with dark and dangerous secrets.

Trapped on the island by the raging storm with only Tim whose reliability is thrown into question, the increasingly restless suspects, and her own trauma-fueled flashbacks for company, Shana will have to trust the one person her abduction destroyed her faith in—herself. But time is ticking down, because if Shana’s right, a killer is in their midst and as the pressure mounts, so do the odds that they’ll strike again

Ah… the whodunit in an isolated place ala Clue style (kudos to the Clue nod within).  This was a fun read.  Quick paced, everyone is a suspect.  A family where everyone is screwed up in some way… god they were some interesting characters! And let’s not forget our main character – Shana Merchant. Dannnggggg.  I loved getting a little bit of her background without it getting too detailed and convoluted.  Tim as her partner was a good one to have as I think they cliqued well together.

Ok, so here’s the thing.  I could’ve done without the whole Carlton part. That’s just me. Meh. Bye.  And the process of elimination by basically calling everyone out got to be a bit tedious.  When you end up going “well it was obvious….” … um, was it? Was it really?  So while I devoured the majority of the read, towards the end I just wanted to know who it was already!

Will I continue this series. Yeah, I think I definitely will.  I’m curious where we will go now.  Will we learn a bit more about what exactly happened to Shana in the past?  Will another crazy family need their help or underestimate them?  I’m definitely curious and I like that Shana has a bit of a wtf streak happening.

This year has already been great for debut novels with thrillers and crime fiction, and DEATH IN THE FAMILY by Tessa Wegert is no different! This is the beginning of a new crime series and I already can’t wait to see where this continues. We get not one, but two different mysteries to follow. I think that one will continue throughout the series and I’m anxious to see the development of it with our main character Senior Investigator Shana Merchant.

We learn immediately that Shana Merchant was abducted by a serial killer and kept as a hostage. She managed to survive the ordeal and was then relocated to upstate New York for a change. Our next case begins when she is called to a scene with bloody bed, a house full of suspects, but the body is missing. To make things even more difficult – the small island Shana and her partner, Tim, are on for the case gets isolated when a huge storm rolls in. They quickly realize that they are on their own for this one, and as we all know, small towns aren’t always the most welcoming to outsiders that begin poking around.

I liked how the author sprinkled in bits and pieces of what Shana went through when she was abducted. This is a story line that I’m sure will be more developed as the series continues and she already has me dying to know more details. Wegert gave us just enough information and clues throughout the book that it kept me guessing until the very end.

If you love Agatha Christie mysteries then this will be one you need on your TBR. I loved the atmosphere the author created, a sense of claustrophobia being stranded on the island, and the suspense of trying to solve the case. The way it ended will keep me anxiously waiting for book two in the series to come out!

One thought on “#ATBR2020 – Death in the Family by Tessa Wegert”