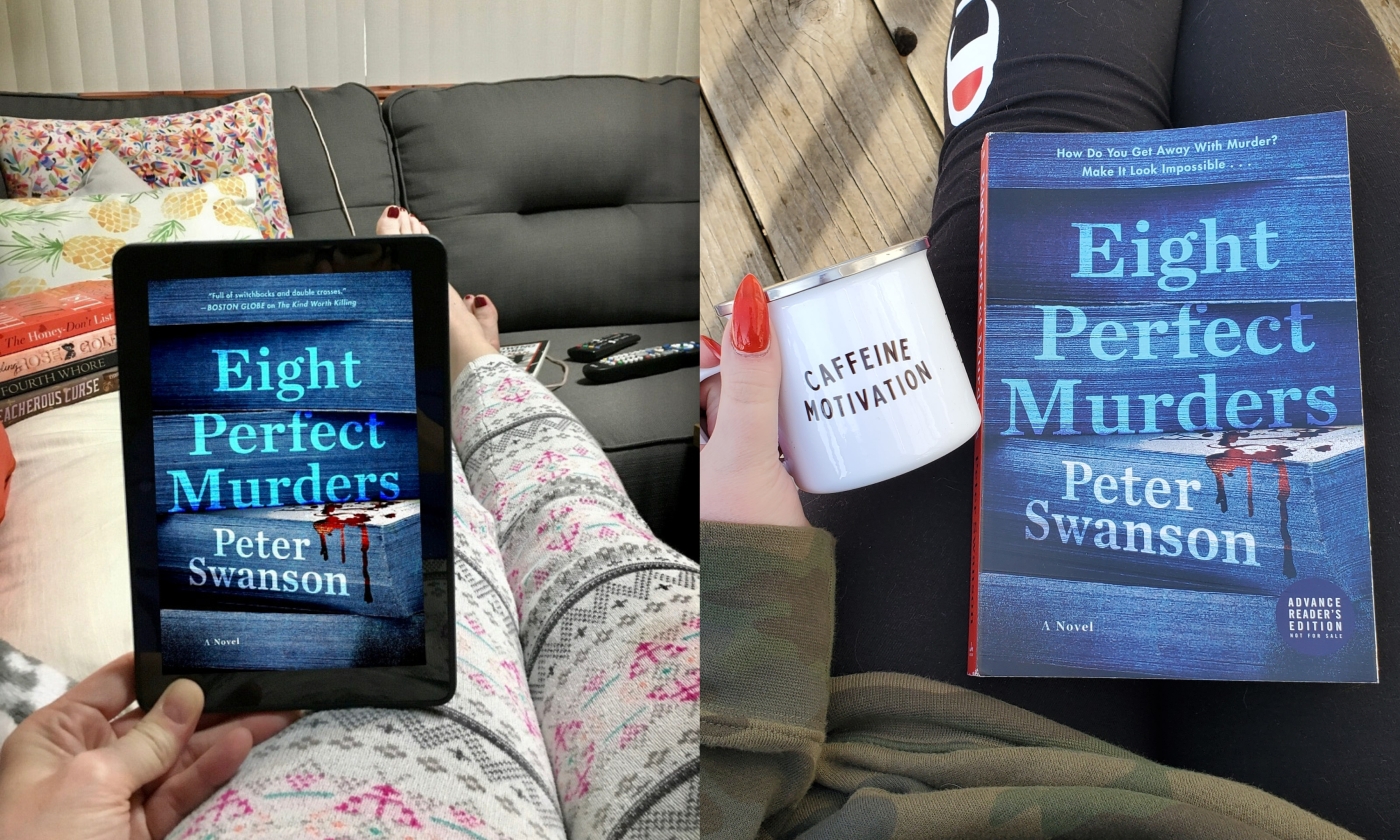 A chilling tale of psychological suspense and an homage to the thriller genre tailor-made for fans: the story of a bookseller who finds himself at the center of an FBI investigation because a very clever killer has started using his list of fiction’s most ingenious murders.

Years ago, bookseller and mystery aficionado Malcolm Kershaw compiled a list of the genre’s most unsolvable murders, those that are almost impossible to crack—which he titled “Eight Perfect Murders”—chosen from among the best of the best including Agatha Christie’s A. B. C. Murders, Patricia Highsmith’s Strangers on a Train, Ira Levin’s Death Trap, A. A. Milne’s Red House Mystery, Anthony Berkeley Cox’s Malice Aforethought, James M. Cain’s Double Indemnity, John D. Macdonald’s The Drowner, and Donna Tartt’s A Secret History.

But no one is more surprised than Mal, now the owner of the Old Devils Bookshop in Boston, when an FBI agent comes knocking on his door one snowy day in February. She’s looking for information about a series of unsolved murders that look eerily similar to the killings on Mal’s old list. And the FBI agent isn’t the only one interested in this bookseller who spends almost every night at home reading. The killer is out there, watching his every move—a diabolical threat who knows way too much about Mal’s personal history, especially the secrets he’s never told anyone, even his recently deceased wife.

To protect himself, Mal begins looking into possible suspects—and sees a killer in everyone around him. But Mal doesn’t count on the investigation leaving a trail of death in its wake. Suddenly, a series of shocking twists leaves more victims dead—and the noose around Mal’s neck grows so tight he might never escape.

Well well well… isn’t this just the cleverist!  This is my fifth Swanson book and what I love about his writing is how very different all the books are.  Some are absolute hits, like Before She Knew Him and Her Every Fear while others like The Kind Worth Killing and All The Beautiful Lies were just ok for me – and yet all were binge reads!  Definitely a favorite author and I look forward to many more from him.

This book in particular is amazing in its homage to the cozy mystery and classic thrillers that we may or may not have read!  I’ll let you know now that there are some definite spoilers for these books mentioned within this book but more than likely you’re already read them… and if not, well, I still think most of the fun is in how you get there so… but that’s just me

.  And also it worked out just fine because while I had every intention of reading these (and tell myself I might still), I realistically know it was never gonna happen.

Anyhooooooooow, this book may seem a bit slow paced to most readers but I found it to be moderately paced and definitely kept my attention… I’ll admit it did begin to lull towards the last third.  However, that ending definitely gave me a huge smile and I LOVE the way it all came together.  Brilliant.  Swanson, you slay me.

This will be especially a good read for bookish people who read a lot… especially in the thriller category.  Read on my friends, murder those books.

Ever since I picked up HER EVERY FEAR, Peter Swanson became an auto-buy author for me. His newest release, EIGHT PERFECT MURDERS, while not my favorite of his books that I’ve read, still was a great mystery with fun touch of involving crime fiction novels. A murderer following a list made by a bookstore employee about perfect murders in crime fiction, including Agatha Christie, Patricia Highsmith, Ira Levine, and more. I will always love getting other books involved or libraries/bookstores in the plot.

Mal is the new owner of Old Devils Bookshop and one night an FBI Agent makes a visit to his store. She begins questioning him about a list of books he made years ago entitled “Eight Perfect Murders” about crime fiction novels that have nearly perfect crimes committed in them. THE ABC MURDERS, DOUBLE INDEMNITY, STRANGERS ON A TRAIN, are just a few on the list. Her reason for questioning him is because there have been a string of unsolved murders recently that are mimicking these books and the killer’s source seems to be Mal’s list.

Who could be using his list to commit these crimes? Why are they doing this? Who could be the next victim? So many questions and they’re running out of time to catch the killer. I thought it was fun having the characters discuss the different crime fiction novels and comparing them to the crime scenes/unsolved cases. Seeing the parallels was great and it added a little something extra to the story. This did have a slower pace for me and it took me out of it at a couple parts, but then it would begin to pick back up. Of course, as we can come to expect from Swanson, there were some great twists thrown in to keep you on your toes!

Considering the discussions and how in-depth the characters go into these books on his list, I would recommend reading those ones first if you don’t want them spoiled. The endings are definitely ruined for all of them for those of you that have been wanting to get to those classic crime fiction novels. Otherwise I would highly recommend this to those wanting a good mystery involving books! I’ll continue to pick up more from Swanson in the future!

One thought on “#ATBR2020 – Eight Perfect Murders by Peter Swanson”