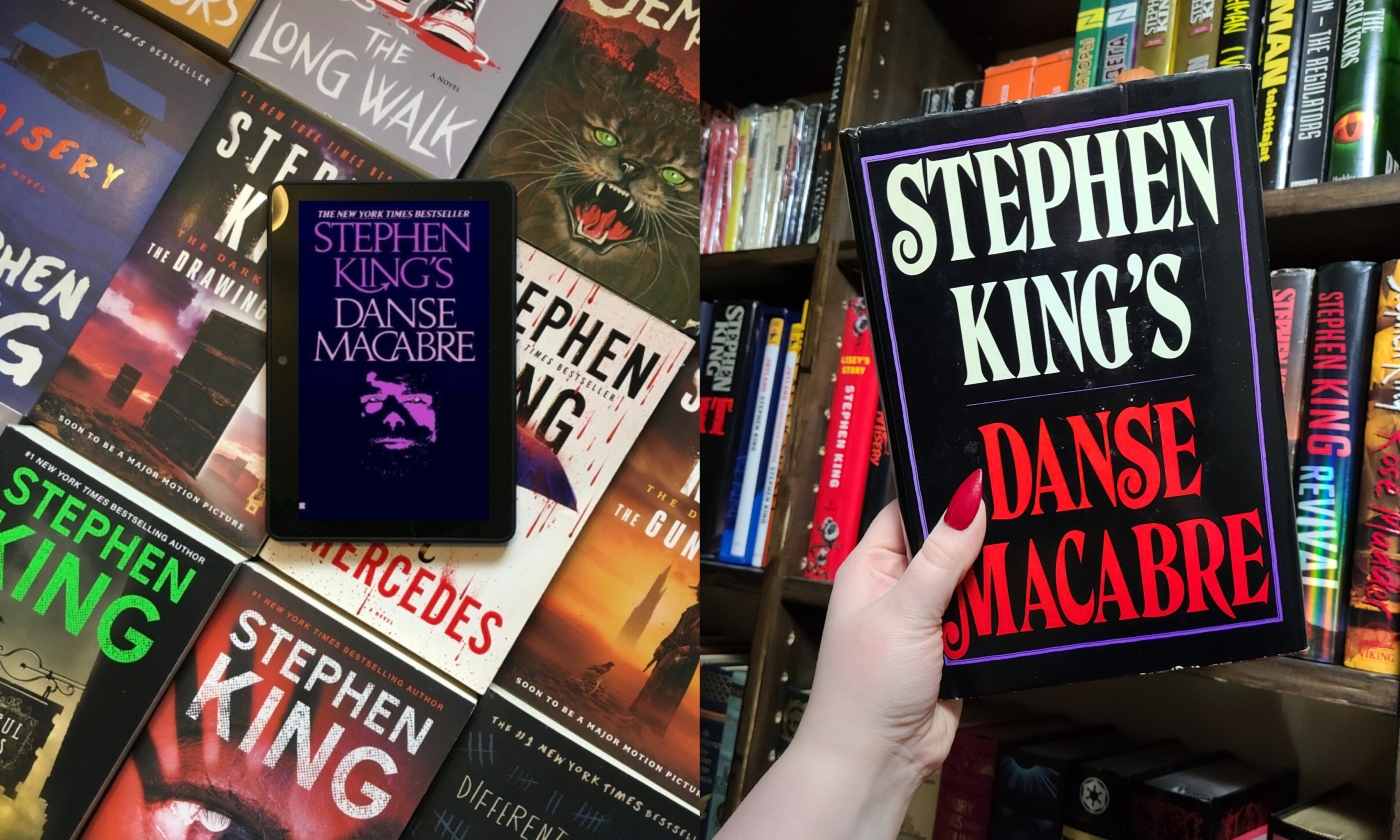 Continuing along in the #ChronologicallyKing read!

Stephen King’s stunning success as a novelist just may be unrivaled in publishing history. Other writers in their early twenties have been acclaimed, but few have reached sales figures of over 25 million books a decade later, and none save King has staked such a solid claim as undisputed master of a very special literary genre–the horror story. Carrie, The Shining, The Dead Zone, Firestarter have led to a worldwide curiosity about Stephen King and his intuitive affinity for the spine-chilling tale.

Danse Macabere is his analysis of horror–as “a moving, rhythmic search…for…the place where we live at our most primitive level.” But it is much more. For the first time, Stephen King establishes a dialogue with the thousands of fans who’ve wondered about his strange control over a basically uncontrollable emotion. How can he do it? What were the internal and external influences on his writing? What channeled a natural writing talent into this distillation of fear?

King answers these and other questions in a style as readable and as compelling as used in any of his novels. This book is a unique one; a colloquium, autobiography, and critical evaluation of films. TV programs, and books which shaped his career and perhaps altered the tastes of readers the world over.

Danse Macabre is a conversation with Stephen King, a personal, one-on-one exchange of ideas on good, bad, great, and awful excursions into horror. For example, Tourist Trap, a virtually unknown small movie, is King’s personal film favorite, although appraisals of Rosemary’s Baby, The Amityville Horror, and dozens of others are perceptively and amusingly offered. In like vein, King comments, often saltily, on his fellow writers and, more devastatingly, on horror as shown on television.

Yet the writing goes deeper to examine the role that horror plays in our everyday lives (and in his, as well), and how experiencing horror through books, movies, and television is man’s natural method of channeling the secret fears and anxieties in all of us. In his words, “we make up horrors to help us cope with the real ones; with the endless inventiveness of humankind, we grasp the very elements which are so divisive and destructive and try to turn them into tools…to dismantle themselves.”

Here, then, is a unique combination of fantasy and autobiography, of classic horror writing honed to a deeply personal, unforgettable edge. Here is Stephen King’s Danse Macabre.

Honestly, this wasn’t a King book that I had ever planned to read. I thought with all the decades that have passed since this was written that things would be outdated and as a person who rarely reads non-fiction, would I *really* be that interested? As a horror fan, YES… right?

Now, I certainly wasn’t wrong with it being outdated but DUH, look at when it was published. However, I did find myself really fascinated with some of the book. Starting with talking about The Invasion of the Body Snatchers definitely peaked my interest as I watched the Donald Sutherland version and that final scene will never be forgotten. And it’s also NOT outdated in the fact that a lot of King’s views still resonate for those movies of *old*. I hope I’m making sense.

In any fashion, I did find this to be a bit dense in certain areas but in others it was awesome to see a different perspective.

When joining in on this reread for #ChronologicallyKing, I honestly wasn’t sure if I would pick this one up again. Aside from true crime, I don’t typically go into the nonfiction genre, but it’s only fair to continue along. I really didn’t remember much from this one when I started it, but I will say I’m glad I did revisit it.

We get King’s insights into multiple decades of horror across different mediums and I did enjoy seeing what books and films he enjoys and recommended. It got a little dense at times and there was a lot to go through but it was definitely engaging to see his perspective on things. I can see this being one that a lot of hardcore horror fans would enjoy and the diehard King fans. I think this would definitely benefit from an updated version or a follow up of sorts since it has now been over 30 years since it was originally published.

One thought on “#ATBR2020 #ChronologicallyKing – Danse Macabre by Stephen King”