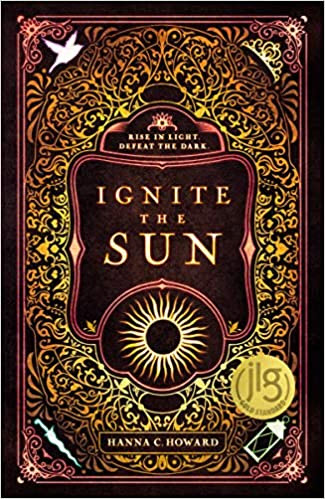 It’s almost the weekend! This week continues to throw me off and all because of having Monday off for the holiday. I won’t complain about the day off, but it definitely screws with your week.

Once upon a time, there was something called the sun … In a kingdom ruled by a witch, the sun is just part of a legend about Light-filled days of old. But now Siria Nightingale is headed to the heart of the darkness to try and restore the Light—or lose everything trying.

Sixteen-year-old Siria Nightingale has never seen the sun. That’s because Queen Iyzabel shrouded the kingdom in shadow upon her ascent to the throne, with claims it would protect her subjects from the dangerous Light.

The Darkness has always left Siria uneasy, and part of her still longs for the stories of the Light-filled days she once listened to alongside her best friend Linden, told in secret by Linden’s grandfather. But Siria’s need to please her strict and demanding parents means embracing the dark and heading to the royal city—the very center of Queen Izybel’s power—for a chance at a coveted placement at court. And what Siria discovers at the Choosing Ball sends her on a quest toward the last vestiges of Light, alongside a ragtag group of rebels who could help her restore the sun … or doom the kingdom to shadow forever.

Ignite the Sun is:

This YA fantasy is the debut novel for Hanna C. Howard and I think it’s a great start! IGNITE THE SUN is a very unique read and I really did enjoy it – and major points for this stunning cover. I think this was a great start for Howard and I look forward to seeing what else she releases in the future.

To keep this short and sweet, I loved the concept of this book. I’ve been trying to imagine a world without the sun ever since picking it up and its so hard to try and comprehend how different life would be. Siria is such a great character and going on this journey with her was fun. Definitely some turns I wasn’t expecting and it was a very easy read.

The only reason why I took off a little was because there was just something that didn’t completely work for me, but I can’t quite identify what it was. I will for sure keep an eye out for more from Howard in the future.

Hanna C. Howard spent most of her childhood wondering how she might avoid growing up, and eventually solved the conundrum by becoming an artist and a writer. She considers tea an essential food group, has more books than shelf-space, and thinks the ultimate geek triumvirate is Harry Potter, Lord of the Rings, and Doctor Who. She lives in Tulsa, Oklahoma with her husband, their two Disreputable Dogs, and one cat skilled in the Martial Arts.