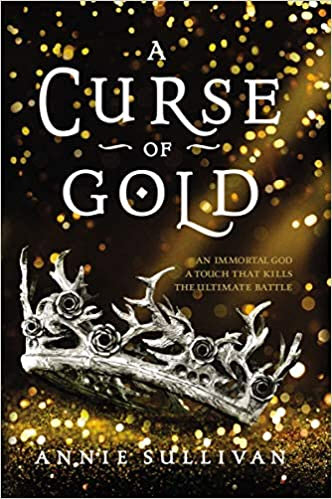 Happy Thursday! The week is almost over and I’m looking forward to absolutely zero plans this weekend.

I did receive a copy of book one, A TOUCH OF GOLD, as well and I have my rating below for that one

Curses and queens. Pirates and kings. Gods and magic. The final saga of a princess cursed by Midas’s touch, a vengeful Greek god, and a dazzling kingdom in the balance.

After barely surviving thieving, bloodthirsty pirates and a harrowing quest at sea to retrieve her stolen treasure, Kora finds readjusting to palace life just as deadly. Her people openly turn against her, threatening to overthrow her as heir to the throne due to fear of her magical powers. When Dionysus puts out a challenge to kill the girl with the golden touch and burn down her kingdom, it’s not just her future on the throne in danger. Kora’s life and entire kingdom are now on contract.

With no other choice, Kora sets out to find Dionysus, journeying to the mysterious disappearing island of Jipper. If she wants to save her kingdom and have any chance at reversing her father’s curse, she will have to enter into a deadly game with Dionysus, the greatest trickster the world, or the underworld, has ever seen.

A Curse of Gold:

Some YA books can always be hit or miss for me, but this one definitely worked! Give me anything that is a retelling and this one stands out because we don’t usually get one about King Midas or his powers. I would recommend reading book one, A TOUCH OF GOLD, before this second one. This picks up where book one left off, so I think you’ll definitely benefit from starting at the beginning.

I think I liked book one just a little bit more. This one took me a little bit to get into with the pacing. I enjoyed more inclusion with the Gods in this and a little more of the world building. I know a lot of other reviewers are torn on the ending, and I’m still not quite sure where I fall on that spectrum.

Overall, a great little YA fantasy/retelling series that I would definitely recommend! Sullivan brought us on quite the journey with Kora and I really enjoyed having a new retelling to binge.

Annie Sullivan grew up in Indianapolis, Indiana. She received her Masters degree in Creative Writing from Butler University. She loves fairytales, everything Jane Austen, and traveling. Her wanderlust has taken her to every continent, where she’s walked on the Great Wall of China, found four-leaf clovers in Ireland, waddled with penguins in Antarctica, and cage dived with great white sharks in South Africa.