Who here believes in possessions and the paranormal? It’s something that has always intrigued me, and the horror movies with possession have always been incredibly scary. 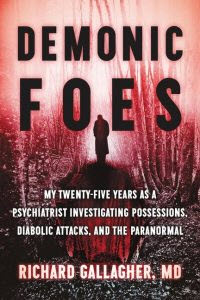 The world’s leading psychiatric authority on demonic possession delves into the hidden world of exorcisms and his own transformation from cynic to believer over the course of his twenty-five-year career.

Successful New York psychiatrist Richard Gallagher was skeptical yet intrigued when a hard-nosed, no-nonsense Catholic priest asked him to examine a woman for a possible exorcism. Meeting her, Gallagher was astonished. The woman’s behavior defied logic. In an instant, she could pinpoint a person’s secret weaknesses. She knew how individuals she’d never known had died, including Gallagher’s own mother, who passed away after a lengthy battle with ovarian cancer. She spoke fluently in multiple languages, including Latin—but only when she was in a trance.

This was not psychosis, Gallagher concluded. It was, in his scientific estimation, what could only be describe as paranormal ability. The woman wasn’t mentally disturbed—she was possessed. This remarkable case was the first of many that Gallagher would encounter. Sought after today by leaders of all faiths—ministers, priests, rabbis and imams, Gallagher has spent a quarter-century studying demonic activity and exorcisms throughout history and has witnessed more cases than any other psychiatrist in the world today.

In this eerie and enthralling book, Gallagher chronicles his most famous cases for the first time, including:

Going beyond horror movies and novels, Demonic Foes takes you deep into this hidden world, sharing in full details of these true-life tales of demonic possession.

I’ll keep it short and sweet, if you believe at all in possession and the paranormal, this will be one that keeps you up at night. I loved the approach the author took with this by including information on the subject’s mental evaluation and their prior medical histories. This was done from a clinical point of view and included other historical information that gave this more depth than just a quick overview of the specific cases.

Those that are intrigued, but skeptical, will probably like this approach much better when it comes to the cases he’s witnessed. Some are explainable due to common traits with psychosis and other mental illnesses, but there are those that will leave you questioning what you believe.

A board-certified psychiatrist and highly experienced clinician and teacher, Richard Gallagher, M.D. is a professor of psychiatry at NY Medical College and a psychoanalyst on the faculty of Columbia University. He earned a bachelor’s degree at Princeton University in Classics, Phi beta Kappa, winning the class Stinnecke Scholarship Award in Latin and Greek. After teaching and playing basketball in France, he came back to the U.S. for medical school and eventually trained as a resident in psychiatry at Yale University. He is the longest-standing member of the International Association of Exorcists since the early 1990’s, serving for a time as a scientific adviser on its governing board. He has devoted many years to distinguishing the rare cases of overt demonic attacks from the much more common conditions of medical and psychiatric disorders. In this capacity Dr. Gallagher has undoubtedly seen more cases of possession – many quite harrowing – than any other physician in the world. He lives in Westchester, N.Y., after serving for many years as the county’s psychiatric emergency and crisis director.