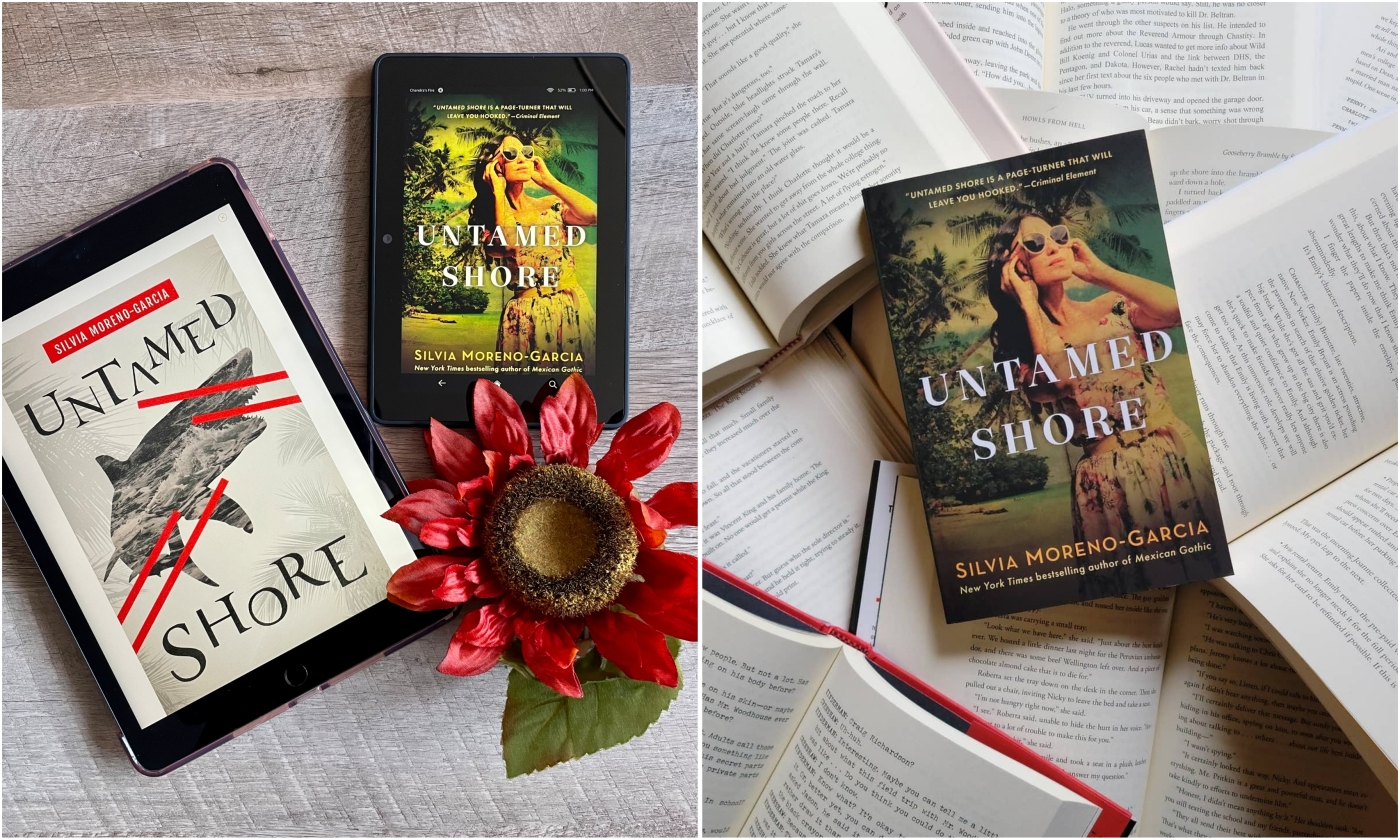 Here is the #BuddyReadsToDieFor April 2021 selection!

Baja California, 1979. Viridiana spends her days watching the dead sharks piled beside the seashore, as the fishermen pull their nets. There is nothing else to do, nothing else to watch, under the harsh sun. She’s bored. Terribly bored. Yet her head is filled with dreams of Hollywood films, of romance, of a future beyond the drab town where her only option is to marry and have children.

Three wealthy American tourists arrive for the summer, and Viridiana is magnetized. She immediately becomes entwined in the glamorous foreigners’ lives. They offer excitement, and perhaps an escape from the promise of a humdrum future.

When one of them dies, Viridiana lies to protect her friends. Soon enough, someone’s asking questions, and Viridiana has some of her own about the identity of her new acquaintances. Sharks may be dangerous, but there are worse predators nearby, ready to devour a naïve young woman who is quickly being tangled in a web of deceit.

Silvia Moreno-Garcia is one of the most exciting voices in fiction, and with her first crime novel, UNTAMED SHORE, she crafts a blazing novel of suspense with an eerie seaside setting and a literary edge that proves her a master of the genre

Historical fiction? Domestic noir suspense? Amazing book covers? Sign me up! This is my second by this author and I’m surprised I haven’t seen it everywhere to be honest.  My love for historical fiction has grown and the noir genre can be hit or miss for me and here’s why:  Typically noir books are extremely atmospheric and (in the few I’ve read in this genre) seem to be more character than plot driven and can be a little bit slower for my normal taste.  I got all of this from Untamed Shore.

I did think this was a bit of a slow start.  We learn of these characters that all seem to live in shades of gray morality and centered with our protagonist, Viridiana (I love this name and kept saying it outloud every time I ran across it on the page 🤣).  She is a talented eighteen year old who gets swept away by tourists who she thinks may be able to point her in a direction for something bigger and better in her life (she certainly doesn’t want to do her mother’s wish of getting married and settling down like a good girl should). Someone dies and then *voila*.. my oh my how things change and this is where things start to get messy… and I like messy!

These characters aren’t the best in making great decisions but watching Viridiana change in ways that were unexpected, you really couldn’t help but cheer her on… at least I couldn’t! The pacing of this story starts to pick up towards the last third but I was still holding judgment.  I was *just* intrigued enough to want to continue but needed something more.  Maybe this was too character driven for me?  Maybe I wanted a bit more action?  Either way, I was addicted to the vivid scenery.  And then the ending.  Sigh. I LOVE.  And it’s a testament to Viridiana and her journey from page to page. Get your noir on, V!

If you love atmospheric, very character driven reads within the noir genre, absolutely pick this up.

Another unique and mesmerizing story from Silvia Moreno-Garcia in UNTAMED SHORE. I’m so happy this was our #BuddyReadsToDieFor selection because it had originally flown under my radar. More domestic suspense, some historical fiction, and a dash of a coming-of-age story is what you’ll find inside the pages of this book. While this started out a little on the slower side the ending completely made up for it – oh man was that an ending!

In the small town of Desengaño, we meet a young woman named Viridiana who is desperate to get out of this little tourist area. During the tourist season she can make some money as a translator and guide but otherwise the days go by in monotony. Until one day she finds out that three American tourists have requested a translator and assistant. Why not take the job? She could make some good money and possibly learn a few things from them. Things really start to get interesting when someone turns up dead.

This book is definitely more character driven and I think that’s why the pacing feels a little slower at the beginning. However, we really get into Viridiana’s mind and it’s so fun watching her grow as the story continues. What I loved about MEXICAN GOTHIC is how mesmerizing and captivating Moreno-Garcia’s writing is and how she just creates an incredible atmosphere with memorable characters. I highly recommend pushing through the slower beginning because once it does pick up you won’t want to stop reading. I can’t wait to read more from this author ASAP.

One thought on “#BuddyReadsToDieFor – #ATBR2021 – Untamed Shore by Silvia Moreno-Garcia”