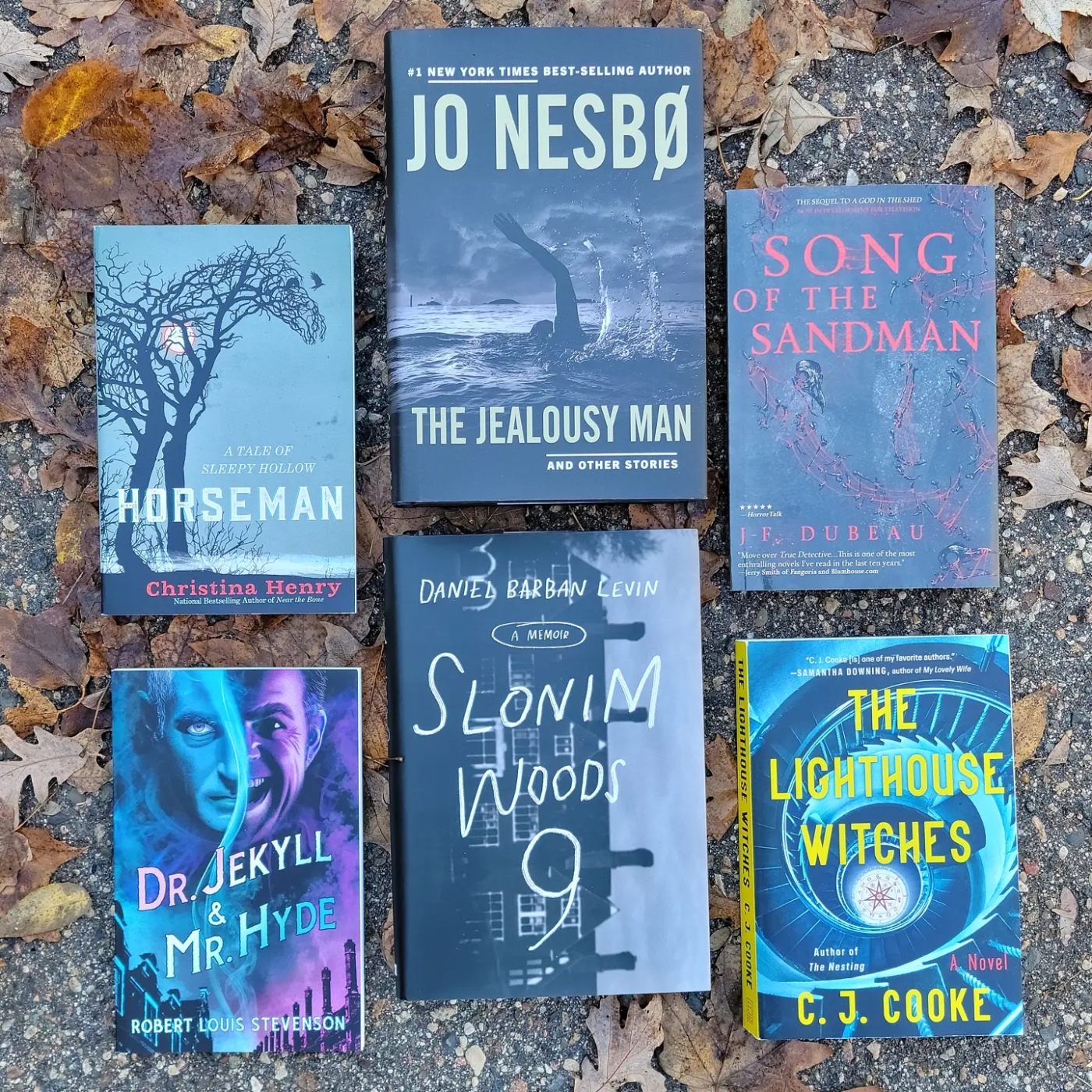 Some spooky book mail to kick off the month!

HORSEMAN – Christina Henry (Released September 28th, 2021 – Thanks to Berkley for the copy!)

Everyone in Sleepy Hollow knows about the Horseman, but no one really believes in him. Not even Ben Van Brunt’s grandfather, Brom Bones, who was there when it was said the Horseman chased the upstart Crane out of town. Brom says that’s just legend, the village gossips talking.

Twenty years after those storied events, the village is a quiet place. Fourteen-year-old Ben loves to play Sleepy Hollow boys, reenacting the events Brom once lived through. But then Ben and a friend stumble across the headless body of a child in the woods near the village, and the sinister discovery makes Ben question everything the adults in Sleepy Hollow have ever said. Could the Horseman be real after all? Or does something even more sinister stalk the woods?

Robert Louis Stevenson’s masterpiece of the duality of good and evil in man’s nature sprang from the darkest recesses of his own unconscious—during a nightmare from which his wife awakened him, alerted by his screams. More than a hundred years later, this tale of the mild-mannered Dr. Jekyll and the drug that unleashes his evil, inner persona—the loathsome, twisted Mr. Hyde—has lost none of its ability to shock. Its realistic police-style narrative chillingly relates Jekyll’s desperation as Hyde gains control of his soul—and gives voice to our own fears of the violence and evil within us. Written before Freud’s naming of the ego and the id, Stevenson’s enduring classic demonstrates a remarkable understanding of the personality’s inner conflicts—and remains the irresistibly terrifying stuff of our worst nightmares

THE JEALOUSY MAN – Jo Nesbo (Releasing October 5th, 2021 – Thanks to Knopf Publishing for the copy)

A veritable crime lover’s delight from a true master of mystery and suspense. Experience the #1 New York Times best-selling author as never before in this dark and thrilling short story collection that takes us on a journey of twisted minds and vengeful hearts.

Jo Nesbø is known the world over as a consummate mystery/thriller writer. Famed for his deft characterization, hair-raising suspense and shocking twists, Nesbø’s dexterity with the dark corners of the human heart is on full display in these inventive and enthralling stories.

A detective with a nose for jealousy is on the trail of a man suspected of murdering his twin; a bereaved father must decide whether vengeance has a place in the new world order after a pandemic brings about the collapse of society; a garbage man fresh off a bender tries to piece together what happened the night before; a hired assassin matches wits against his greatest adversary in a dangerous game for survival; and an instantly electric connection between passengers on a flight to London may spell romance, or something more sinister.With Nesbø’s characteristic gift for outstanding atmosphere and gut-wrenching revelations, The Jealousy Man confirms that he is at the peak of his abilities.

A stunning firsthand account of the creation of a modern cult under conman Larry Ray and the horrifying costs paid by his young victims: his daughter ‘ s college roommates

“Chilling . . . eloquent . . . a powerful portrayal of a young man’s ability to emerge whole from an experience intended to break him.”–Publishers Weekly

In September 2010, at the beginning of the academic year at Sarah Lawrence College, a sophomore named Talia Ray asked her roommates if her father could stay with them for a while. No one objected. Her father, Larry Ray, was just released from prison, having spent three years behind bars after a conviction during a bitter custody dispute.

Larry Ray arrived at the dorm, a communal house called Slonim Woods 9, and stayed for the whole year. Over the course of innumerable counseling sessions and “family meetings,” the intense and forceful Ray convinced his daughter’s friends that he alone could help them “achieve clarity.” Eventually, Ray and the students moved into a small Manhattan apartment, beginning years of manipulation and abuse, as Ray tightened his control over his young charges through blackmail, extortion, and ritualized humiliation.

Daniel Barban Levin was one of the original residents of Slonim Woods 9. Ray coached Daniel through a difficult break-up, slowly drawing him into his web. After two years of escalating psychological, physical, and sexual abuse, Daniel found the strength to escape from Ray’s influence and take control of his own life.

In April 2019, a New York magazine cover story, “The Stolen Kids of Sarah Lawrence,” exposed Ray’s crimes to the world. In February 2020, he was finally indicted on charges of extortion, sex trafficking, forced labor, and money laundering.Beginning the moment Daniel set foot on Sarah Lawrence’s idyllic campus and spanning the two years he spent in the grip of a megalomaniac, this brave, lyrical, and redemptive memoir reveals how a group of friends were led from campus to a cult without the world even noticing.

SONG OF THE SANDMAN – J.F. Dubeau (Releasing October 19th, 2021 – Thanks to Inkshares for the free copy)

After a terrible mass shooting at Cicero’s Circus, the evil presence responsible for the carnage is taken in by a doomsday cult lying in wait for such an opportunity.

The village struggles to get back to normal in the aftermath of the shooting. The massacre was the final straw for many inhabitants, triggering a mass exodus. Families left their homes without looking back, not even to find out what could have caused such a tragedy. However, to those who know the truth―that a malevolent god unleashed its wrath upon the village―it’s only a matter of time before events repeat themselves.

Venus McKenzie ventures deeper into the pit of secrets left in death’s wake, praying that what she’ll find will help her against the dark forces she couldn’t defeat before.

THE LIGHTOUSE WITCHES – CJ Cooke (Releasing October 5th, 2021 – Thanks to Berkley for the free copy)

Two sisters go missing on a remote Scottish island. Twenty years later, one is found–but she’s still the same age as when she disappeared. The secrets of witches have reached across the centuries in this chilling Gothic thriller from the author of the acclaimed The Nesting.

When single mother Liv is commissioned to paint a mural in a 100-year-old lighthouse on a remote Scottish island, it’s an opportunity to start over with her three daughters–Luna, Sapphire, and Clover. When two of her daughters go missing, she’s frantic. She learns that the cave beneath the lighthouse was once a prison for women accused of witchcraft. The locals warn her about wildlings, supernatural beings who mimic human children, created by witches for revenge. Liv is told wildlings are dangerous and must be killed.

Twenty-two years later, Luna has been searching for her missing sisters and mother. When she receives a call about her youngest sister, Clover, she’s initially ecstatic. Clover is the sister she remembers–except she’s still seven years old, the age she was when she vanished. Luna is worried Clover is a wildling. Luna has few memories of her time on the island, but she’ll have to return to find the truth of what happened to her family. But she doesn’t realize just how much the truth will change her