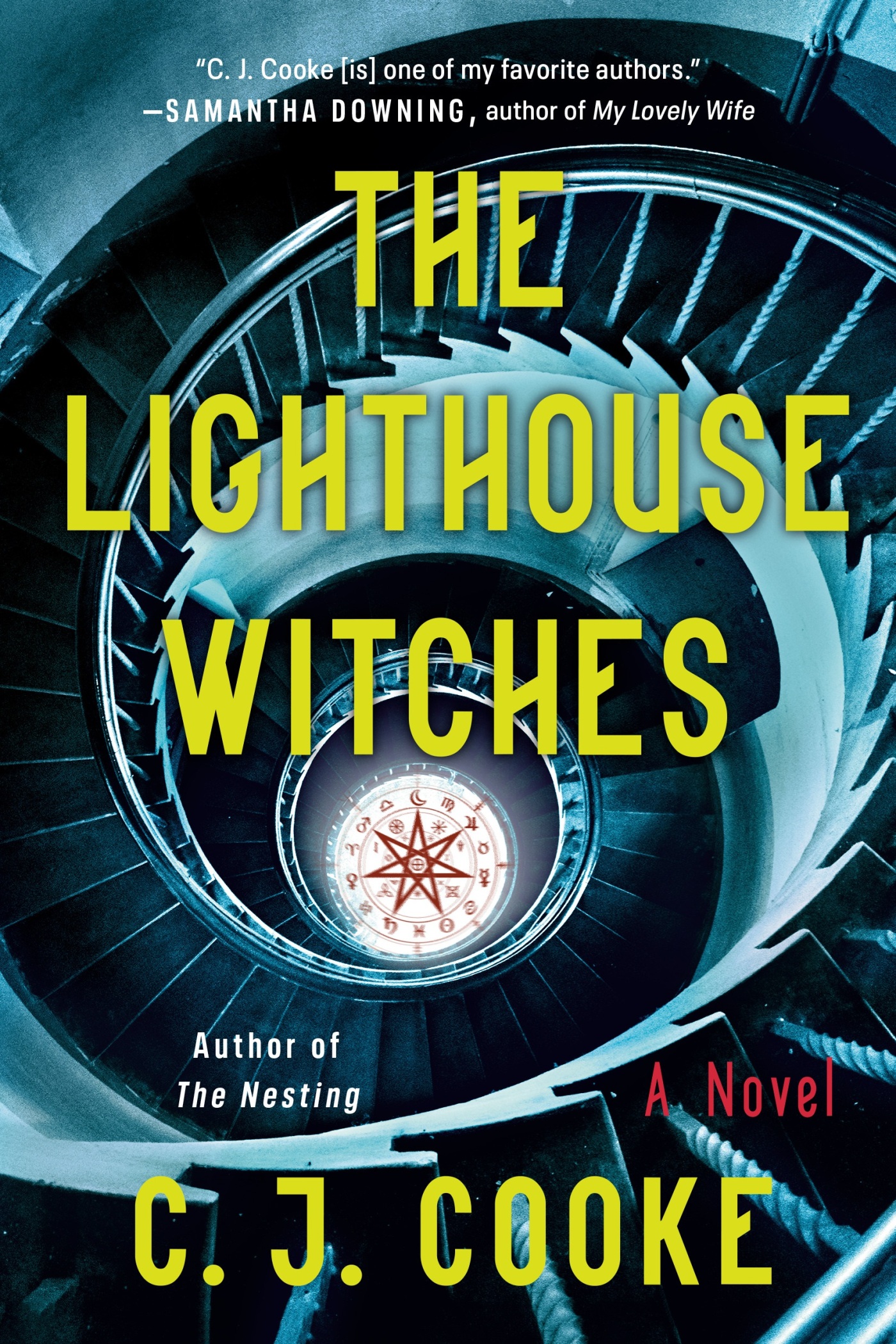 It’s time to kick off the month with a blog tour!

When single mother Liv is commissioned to paint a mural in a 100-year-old lighthouse on a remote Scottish island, she thinks it’s an opportunity to start over with her three daughters Luna, Sapphire, and Clover. When Sapphire and Clover go missing, she’s frantic. She learns that the cave beneath the lighthouse was once a prison for women accused of witchcraft. The locals warn her about wildlings, supernatural beings who mimic human children, created by witches for revenge.

Twenty-two years later, Luna has been searching for her missing sisters. When she receives a call that Clover has been found, she’s initially ecstatic. However, she’s still seven years old, the age she was when she vanished. Luna is worried Clover is a wildling. Luna has few memories of her time on the island, but she’ll have to return to find the truth of what happened to her family. But she doesn’t realize just how much the truth will change her.

Drawing on history, Cooke drew inspiration for THE LIGHTOUSE WITCHES from the little-known history of Scotland’s witch trials. Cooke said in an interview with Crime by the Book that “there was a witch trial 20 minutes from my home and there’s barely any commemoration for the women who were murdered. Four thousand people–mostly women–tortured and murdered, their names and memories tainted forever…It fascinates and disturbs me, because four hundred years later we still use the term ‘witch’ to slander women.”

This is such a great book for the spooky time of year! While I have another book by CJ Cooke on my shelves, I haven’t picked it up yet, but that will be changing sooner than later. THE LIGHTOUSE WITCHES is equal parts atmospheric, Gothic, and enchanting. I was a little concerned with the three timelines but there was zero confusion because Cooke so perfectly wove them together. Knowing the history behind why the author chose this is unsettling and made this even more eerie to read. Highly recommend giving this a try!

Luna swims to the surface of sleep and lurches upright with a gasp.She had the dream again. The one about her mother killing her. This time her mother made her sit in the lantern room of the Longing, the sky outside dark and sequined with stars. On theground, a silky plum-dark liquid swirled around her feet.“Hold still,” her mother said, and she squeezed her knees to- gether as she had a hundred times before, when her mother braided her hair and ordered her to sit still. Only this time, her mother wasn’t braiding her hair. She was smashing Luna’s head with a hammer. The liquid on the ground was her blood.

The tapping sound of the hammer continues, seeping into her conscious thoughts. She realizes she didn’t dream that part at all— it’s coming from the front door.

She gets up awkwardly, cradling her stomach with a hand as she moves one leg at a time over the side of the bed, the roundness of it fitting neatly into her palm. Up until twenty weeks she’d had no bump at all, no proof of her cargo. She fretted about it, mostly because her pregnancy app depicted a cartoon of a woman with a neat round melon and all she’d developed was a kind of spare tirearound her waistline that sagged over her jeans. Somewhere around week twenty-four her belly had seemed to erupt. Now she can’t go an hour without peeing and could eat beefsteak tomatoes until the cows come home. She eats them like apples, letting the sweet red juice run down the sides of her mouth, seeds corralling in her cleavage.

The knocking continues. She pulls the door open to find Mar- garet standing there, their neighbor from the flat upstairs. Marga- ret’s in her seventies and generally aggrieved about something or other. Today is no exception.

“I really do think I’m a very patient neighbor, but this really takes both the cake and the biscuit!”

“I’m sorry, what?” Luna’s eyes fall on the object that Margaret is holding in front of her like evidence of some sort. It’s a limpet shell.

“I have no objection to you running a business from home,” Margaret says, “and when Ethan said he wanted to clean his tools in the front garden, did I quibble? Not a word did you hear from me. But when you decide to fill your bin until it explodes all over the street, I really must speak out. I could have twisted my ankle!” “I don’t know what you’re . . .” Luna steps forward, following the sweep of Margaret’s hand to the wheelie bin left out on the curb. Someone has dumped another two bags of rubbish inside, leaving the lid flipped open. The top bag has ripped, revealing hundreds of shells that spew over the garden path: cockles, whelks, periwinkles, barnacles, and even what she used to call smacked lugs, the purple and black ear-shape of mussel shells. Someone’sshell collection, perhaps, or a homeschool project.

Margaret follows her to the bin, where she stoops down, trying to pick up one of the burst bags to stuff it back into the bin.

“I can’t for the life of me work out why you’d gather so manyshells,” Margaret says, aggrieved. “Nor why you’d put them in the general waste.”

“I didn’t.” Luna says it with a sigh. Her head throbs and it’s suddenly difficult to breathe.

“Ethan must have done it,” Margaret decides, folding her arms. “Ethan’s not here.”

Luna turns and places her hands on the old woman’s shoulders. “I’ll clean it up,” she says with a forced smile.

Before Margaret can think of another stream of questions Luna has headed back inside, locking the door behind her.

Light from the window washes the surfaces of Luna’s flat: a Pilates reformer, her sewing table, the life-sized orthopedic skeleton she bought Ethan as a gift when he started his physiology course, her handmade necklaces of leather and driftwood hanging from an ironing board. The plan was to sell the necklaces on Etsy and buy baby things with the extra cash, but the orders haven’t exactly been flooding in. Ethan has taken on extra Pilates classes to cover their rent, but he failed his last physiology exams. On the coffee table—an old milk crate they plucked out of a Dumpster—there’s a stack of textbooks borrowed from the library for Monday’s re-sit.

She sinks down on the sofa, anger crackling in her ears, fizzing in her wrists. The dream of her mother dances around her head like shards of glass. Every time she thinks or dreams of her mother, it happens. Ethan calls the days after such dreams a rage hangover— the massive comedown from some intense buildup of fury—and asusual she’s drained and weepy. Her memories of Lòn Haven are still so fragmented, little more than shattered slivers of a mirror.

The psychiatrist said trauma can cause memory loss. What- ever happened was so terrible it caused her to dissociate, effec- tively checking out of the horror. But the memories will be in there somewhere, buried deep in the earth of her mind. It makes her angry, the forgetting. What she does know—or what her social services file states—is that her mother, Liv, abandoned her there when she was nine. No explanation. No apparent motivation. Just dumped her in the woods and vanished into thin air.

She’s never been back to Lòn Haven, never so much as googled it. The very thought of that place triggers a panic attack.

She cradles the small gray triangle of a limpet shell in her hand. A limpet will wear away a patch of rock to fit its shell exactly. A home scar, it’s called, sealing it to the rock. Creating a tight fit to its home. Limpets move around at night to feed, but they always return to the home scar.

Where did she learn that? A few images begin to coalesce in her mind: her mother at a garden gate, bending down to pick up a limpet shell. There’s a raging sea behind her. And a lighthouse.

Luna gives a shudder and sets the shell down as though it’s white hot. She doesn’t dare touch it. Ethan is coming to pick her up shortly for the hospital scan. She’ll ask him to sweep up the shells when he arrives.

One thought on “Blog Tour, Excerpt & Review – The Lighthouse Witches by CJ Cooke”