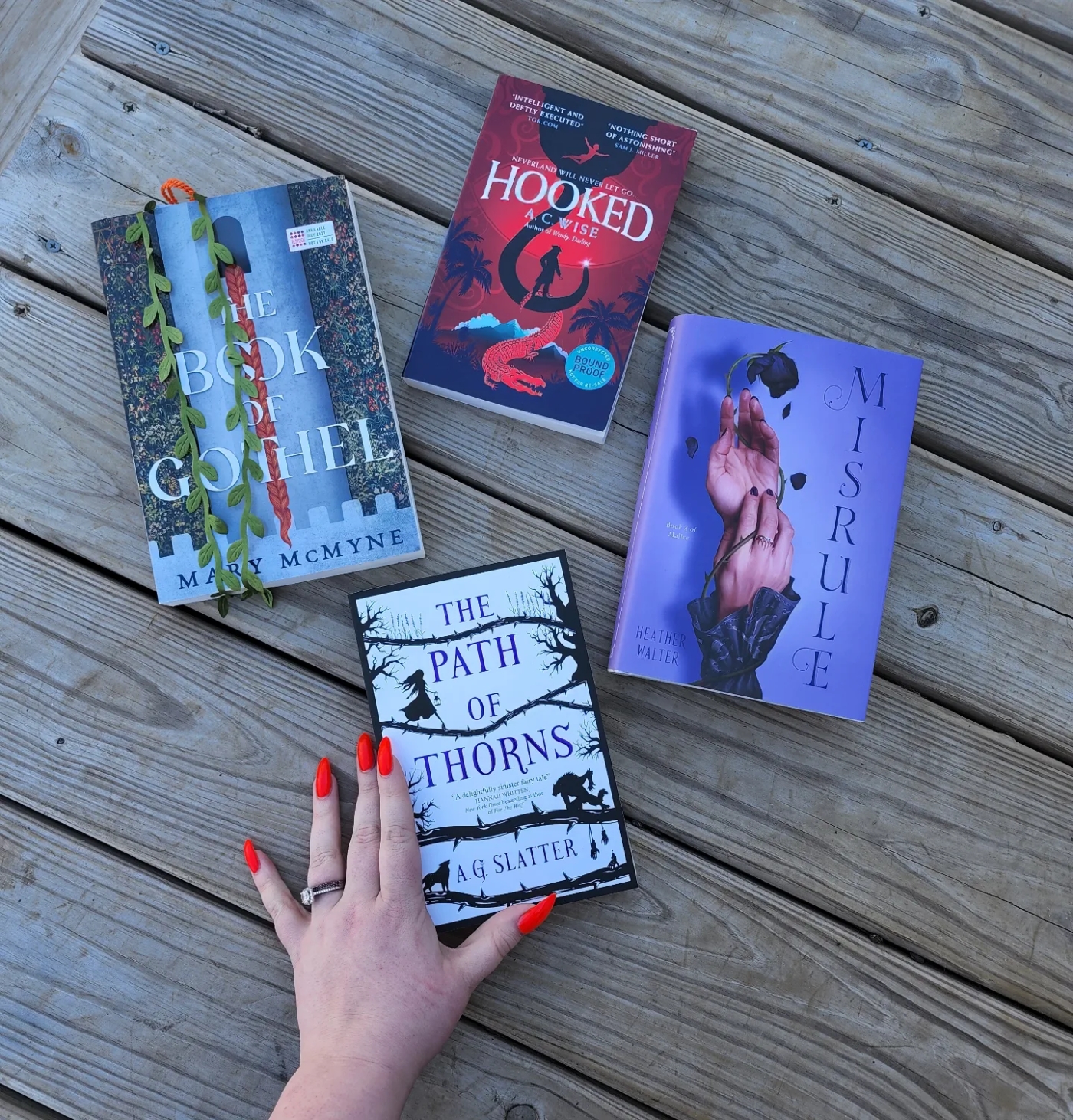 Some upcoming retellings that I’m very excited about! I love thrillers, horror, and historical fiction but retellings are a favorite, especially when they’re darker.

Thanks to the publishers in exchange for my honest reviews

Everyone knows the tale of Rapunzel in her tower, but do you know the story of the witch who put her there?

Haelewise has always lived under the shadow of her mother, Hedda—a woman who will do anything to keep her daughter protected. For with her strange black eyes and even stranger fainting spells, Haelewise is shunned by her medieval village, and her only solace lies in the stories her mother tells of child-stealing witches, of princes in wolf-skins, of an ancient tower cloaked in mist, where women will find shelter if they are brave enough to seek it.

Then, Hedda dies, and Haelewise is left unmoored. With nothing left for her in her village, she sets out to find the legendary tower her mother used to speak of—a place called Gothel, where Haelewise meets a wise woman willing to take her under her wing.

But Haelewise is not the only woman to seek refuge at Gothel. It’s also a haven for a girl named Rika, who carries with her a secret the Church strives to keep hidden. A secret that unlocks a dark world of ancient spells and murderous nobles behind the world Haelewise has always known…

Captain James Hook, the immortal pirate of Neverland, has died a thousand times. Drowned, stabbed by Peter Pan’s sword, eaten by the beast swimming below the depths, yet James was resurrected every time by one boy’s dark imagination. Until he found a door in the sky, an escape. And he took the chance no matter the cost.

Now in London twenty-two years later, Peter Pan’s monster has found Captain Hook again, intent on revenge. But a chance encounter leads James to another survivor of Neverland. Wendy Darling, now a grown woman, is the only one who knows how dark a shadow Neverland casts, no matter how far you run. To vanquish Pan’s monster once and for all, Hook must play the villain one last time…

Alone in the world, Asher Todd travels to the remote estate of Morwood Grange to become governess to three small children. Her sole possessions comprise a sea chest and a large carpet bag she hangs onto for dear life. She finds a fine old home, its inhabitants proud of their lineage and impeccable reputation, and a small village nearby. It seems an untroubled existence, yet there are portraits missing from the walls, locked rooms, and names excised from the family tree inscribed in the bible. In short order, the children adore her, she becomes indispensible to their father Luther in his laboratory, and her potions are able to restore the sight of granddame Leonora. Soon Asher fits in as if she’s always been there, but there are creatures that stalk the woods at night, spectres haunt the halls, and Asher is not as much a stranger to the Morwoods as it might at first appear.

Does true love break curses or begin them? The dark sorceress of “Sleeping Beauty” reclaims her story in this sequel to Malice.

The Dark Grace is dead.

Feared and despised for the sinister power in her veins, Alyce wreaks her revenge on the kingdom that made her an outcast. Once a realm of decadence and beauty, Briar is now wholly Alyce’s wicked domain. And no one will escape the consequences of her wrath. Not even the one person who holds her heart.

Princess Aurora saw through Alyce’s thorny facade, earning a love that promised the dawn of a new age. But it is a love that came with a heavy price: Aurora now sleeps under a curse that even Alyce’s vast power cannot seem to break. And the dream of the world they would have built together is nothing but ash.

Alyce vows to do anything to wake the woman she loves, even if it means turning into the monster Briar believes her to be. But could Aurora love the villain Alyce has become?Or is true love only for fairy tales?