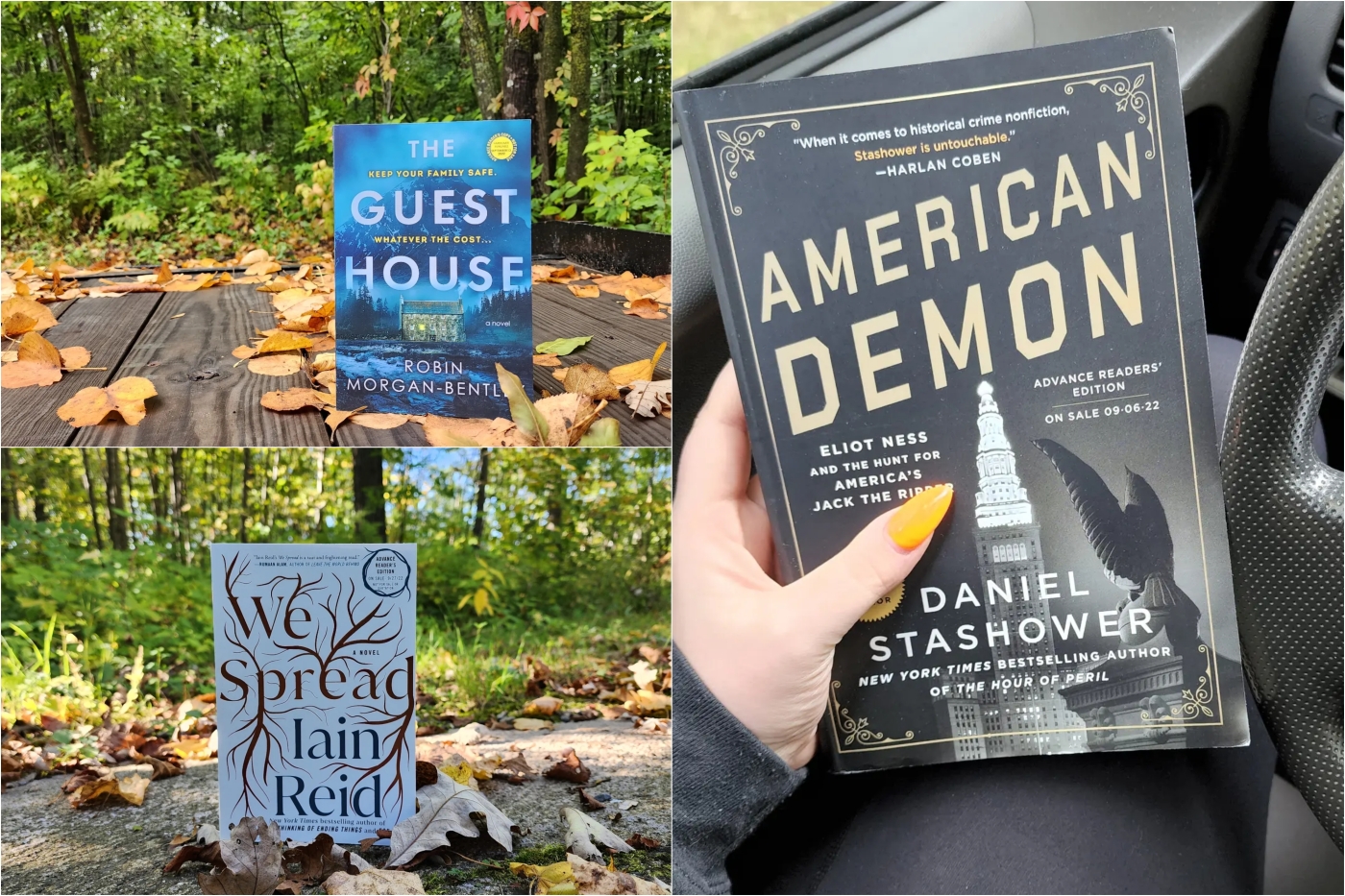 Part two before my monthly wrap up!

Thanks to the mentioned publishers for any gifted copies

With a few weeks to go until their first baby is due, Jamie and Victoria head off for a weekend break in a small countryside guesthouse.

The next morning, Jamie and Victoria awake to find the guesthouse has been emptied. Both their mobile phones and their car keys have disappeared, the owners are nowhere to be seen, and all the doors are locked. Even though it’s a few weeks early, Victoria knows the contractions are starting. And there’s no way out…

A riveting psychological thriller for fans of Ruth Ware and Lucy Foley, The Guest House will keep readers on the edge of their seats.

I love an isolated thriller and as if those aren’t stressful enough situations, imagine going into labor sooner than anticipated? Jamie and Victoria are on their last little trip because the baby is born and they decided getting away to a little countryside house would be the best choice. They wake up and everything has been emptied out. Car keys, phones, and all the doors are locked. How did this happen and with contractions starting will they be able to get out before the baby comes? Loved the premise but a couple things were very over the top (not always bad) and took away from the end for me which is why it dropped a little from a solid 4 star read. Definitely recommend it and will look for more from the author!

WE SPREAD – Iain Reid (Released September 27th, 2022 – Thanks to Scout Press for the gifted copy)

A new work of philosophical suspense.

Penny, an artist, has lived in the same apartment for decades, surrounded by the artifacts and keepsakes of her long life. She is resigned to the mundane rituals of old age, until things start to slip. Before her longtime partner passed away years earlier, provisions were made, unbeknownst to her, for a room in a unique long-term care residence, where Penny finds herself after one too many “incidents.”

Initially, surrounded by peers, conversing, eating, sleeping, looking out at the beautiful woods that surround the house, all is well. She even begins to paint again. But as the days start to blur together, Penny—with a growing sense of unrest and distrust—starts to lose her grip on the passage of time and on her place in the world. Is she succumbing to the subtly destructive effects of aging, or is she an unknowing participant in something more unsettling?

At once compassionate and uncanny, told in spare, hypnotic prose, Iain Reid’s genre-defying third novel explores questions of conformity, art, productivity, relationships, and what, ultimately, it means to grow old.

This is my first time reading anything by Iain Reid and I already know I have to pick up his other books. This book did not disappoint. It got more intense and the horror was just creeping in as the story continued. Each part added to the psychological horror and suspense that I couldn’t wait to see how it was going to end. This one creeps up on you and leaves one hell of an unsettling feeling. This was exactly what I needed to get into the spooky mood for October.

AMERICAN DEMON: ELIOT NESS AND THE HUNT FOR AMERICA’S JACK THE RIPPER – Daniel Stashower (Released September 6th, 2022 – Thanks to Minotaur Books for the gifted copy)

Boston had its Strangler. California had the Zodiac Killer. And in the depths of the Great Depression, Cleveland had the Mad Butcher of Kingsbury Run.

On September 5th, 1934, a young beachcomber made a gruesome discovery on the shores of Cleveland’s Lake Erie: the lower half of a female torso, neatly severed at the waist. The victim, dubbed “The Lady of the Lake,” was only the first of a butcher’s dozen. Over the next four years, twelve more bodies would be scattered across the city. The bodies were dismembered with surgical precision and drained of blood. Some were beheaded while still alive.

Terror gripped the city. Amid the growing uproar, Cleveland’s besieged mayor turned to his newly-appointed director of public safety: Eliot Ness. Ness had come to Cleveland fresh from his headline-grabbing exploits in Chicago, where he and his band of “Untouchables” led the frontline assault on Al Capone’s bootlegging empire. Now he would confront a case that would redefine his storied career.

Award-winning author Daniel Stashower shines a fresh light on one of the most notorious puzzles in the annals of crime, and uncovers the gripping story of Ness’s hunt for a sadistic killer who was as brilliant as he was cool and composed, a mastermind who was able to hide in plain sight. American Demon reconstructs this ultimate battle of wits between a hero and a madman

I love true crime books involving people I haven’t heard about before. Plus, this title. I mean I practically cracked it open the second I opened the envelope. Loved this and highly recommend if you wanna learn about the Mad Butcher of Kingsbury Run. Gruesome murders and it doesn’t read like a nonfiction book.