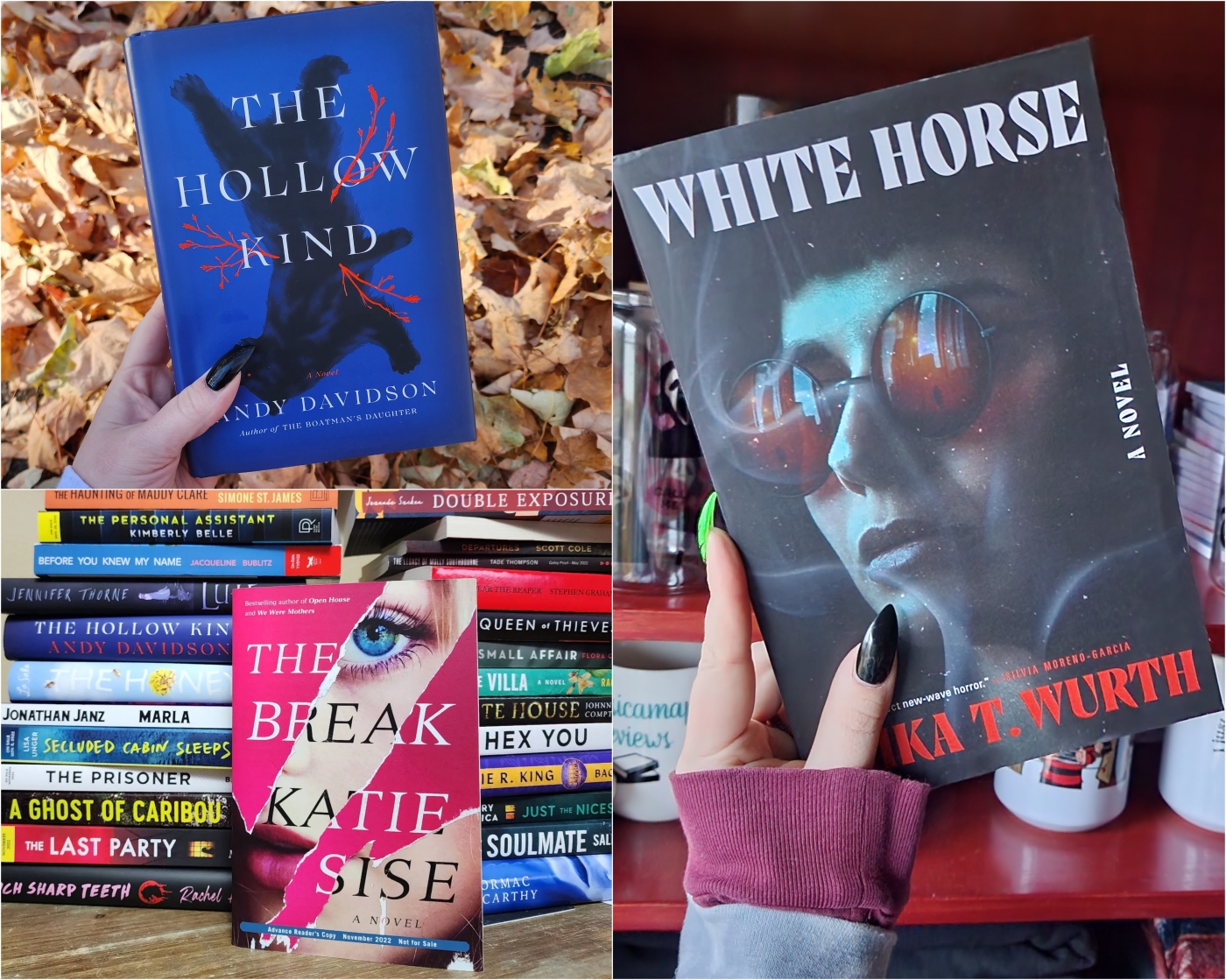 This seems to be the best format for me lately to stay caught up on reviews for the month. I definitely want to get back into doing the full reviews again but it feels like that’s going to be the goal for 2023.

THE HOLLOW KIND – Andy Davidson (Released October 11th, 2022 – Thanks to MCD Books for the gifted copy)

Andy Davidson’s epic horror novel about the spectacular decline of the Redfern family, haunted by an ancient evil.

Nellie Gardner is looking for a way out of an abusive marriage when she learns that her long-lost grandfather, August Redfern, has willed her his turpentine estate. She throws everything she can think of in a bag and flees to Georgia with her eleven-year-old son, Max, in tow.

It turns out that the estate is a decrepit farmhouse on a thousand acres of old pine forest, but Nellie is thrilled about the chance for a fresh start for her and Max, and a chance for the happy home she never had. So it takes her a while to notice the strange scratching in the walls, the faint whispering at night, how the forest is eerily quiet. But Max sees what his mother can’t: They’re no safer here than they had been in South Carolina. In fact, things might even be worse. There’s something wrong with Redfern Hill. Something lurks beneath the soil, ancient and hungry, with the power to corrupt hearts and destroy souls. It is the true legacy of Redfern Hill: a kingdom of grief and death, to which Nellie’s own blood has granted her the key.

From the author of The Boatman’s Daughter, The Hollow Kind is a jaw-dropping novel about legacy and the horrors that hide in the dark corners of family history. Andy Davidson’s gorgeous, Gothic fable tracing the spectacular fall of the Redfern family will haunt you long after you turn the final page.

My Thoughts: 5/5 stars – This was my introduction to Andy Davidson and I wasn’t sure what to expect. I will say that I was skeptical when I saw people mentioning Stephen King meets Guillermo del Toro and Lovecraft, but they were so right. This is the perfect mix of gothic, cosmic, and body horror and I absolutely loved it. Two timelines, bloody family legacies, monsters, demons, an incredible atmosphere, and it was just what I needed. Parts felt a little long but it all ended up worth it in the end. Now I need to pick up more from Davidson!

THE BREAK – Katie Sise (Released November 1st. 2022 – Thanks to MBC Books and Little A for the gifted copy)

Can she trust the people she loves? Can she trust herself? A new mother is pushed to the edge in a provocative thriller by the Amazon Charts bestselling author of Open House.

After the traumatic birth of her daughter at a New York City hospital, Rowan O’Sullivan returns home to her apartment with her perfect newborn, Lila. At her side are her husband, Gabe, and June, a part-time babysitter hired to help Rowan in any way she can.

But in this time of joy, Rowan can’t shake the feeling that something isn’t right. She feels dread. She’s breaking.

Rowan’s growing instability leads her to accuse June of unspeakable things. And when June disappears just days later, Rowan becomes a suspect. The neighbors heard the screaming. But only Rowan knows what really happened. If her mind can be trusted. Since Lila’s birth, her memory has been both unreliable and frightening.

To uncover what happened to June and protect her new baby, Rowan must try to untangle the deep recesses of her mind and face the dark things she’s so desperate to keep buried. When she does, no one is prepared for where the truth leads.

My Thoughts: 3.5/5 stars – Something that’s good to know before starting is that this is more of a slow burning thriller rather than a fast paced one. Plenty of red herrings to keep you guessing and despite a lull for me, the author had me hooked about at the halfway point. I liked the alternating POVs and I’m so glad I stuck it out because, wow. The ending is so worth pushing through the slow build up!

White Horse is a gritty, vibrant debut from Erika T. Wurth about an Indigenous woman who must face her past when she discovers a bracelet haunted by her mother’s spirit.

Some people are haunted in more ways than one.

Heavy metal, ripped jeans, Stephen King novels, and the occasional beer at the White Horse have defined urban Indian Kari James’s life so far. But when her cousin Debby finds an old family bracelet that once belonged to Kari’s mother, it inadvertently calls up both her mother’s ghost and a monstrous entity, and her willful ignorance about her past is no longer sustainable…

Haunted by visions of her mother and hunted by this mysterious creature, Kari must search for what happened to her mother all those years ago. Her father, permanently disabled from a car crash, can’t help her. Her Auntie Squeaker seems to know something but isn’t eager to give it all up at once. Debby’s anxious to help, but her controlling husband keeps getting in the way. Kari’s journey toward a truth long denied by both her family and law enforcement forces her to confront her dysfunctional relationships, thoughts about a friend she lost in childhood, and her desire for the one thing she’s always wanted but could never have.

My Thoughts: 5/5 stars – A main character in her 30’s, wears all black, loves horror, and she loves Stephen King? Sounds like my new best friend! While there are definitely some horror elements to this I’d call this more of a mystery with a side of paranormal. Loved the dark vibes throughout and Wurth does an incredible job bringing Kari to life! We go through quite the journey with her as she navigates grief, trauma, addiction, and being haunted by the mystery of her missing mother and a dark entity. The writing was mesmerizing and it’s a book you won’t want to put down. An incredible debut!