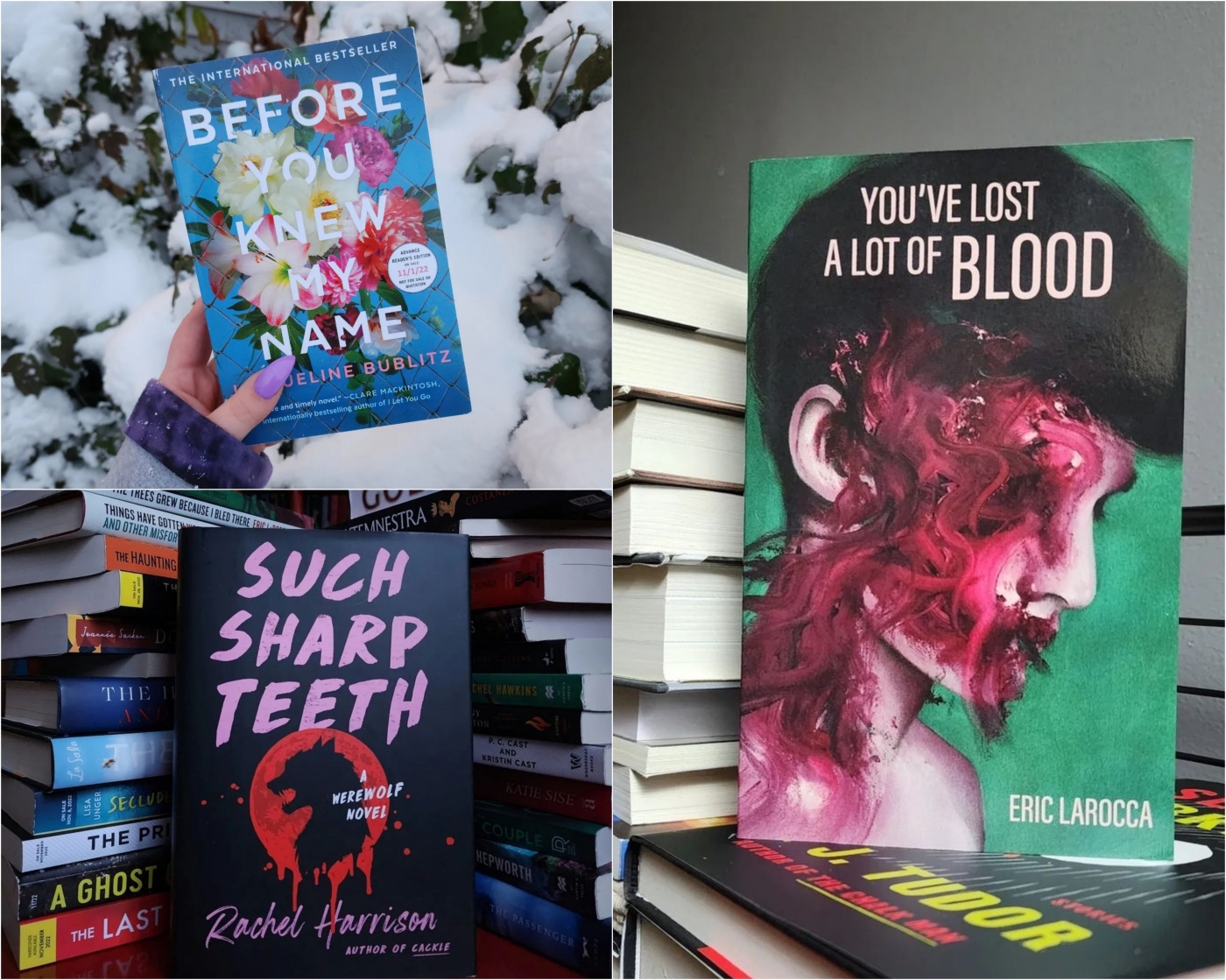 Ah yes, the last day of the month and I’m trying to get everything shared before the wrap up. This is just the norm on here for this year it seems, but the holiday season always takes up more time than we realize or plan for, so I consider it a win to get these up at all. There will be a part three, otherwise there would be a lot in this post.

BEFORE YOU KNEW MY NAME – Jacqueline Bublitz (Released November 1st, 2022 – Thanks to Atria Books for the gifted copy)

This is not just another novel about a dead girl. Two women—one alive, one dead—are brought together in the dark underbelly of New York City to solve a tragic murder.

When she arrived in New York on her eighteenth birthday carrying nothing but $600 cash and a stolen camera, Alice Lee was looking for a fresh start. Now, just one month later, she is the city’s latest Jane Doe. She may be dead but that doesn’t mean her story is over.

Meanwhile, Ruby Jones is also trying to reinvent herself. After travelling halfway around the world, she’s lonelier than ever in the Big Apple. Until she stumbles upon a woman’s body by the Hudson River, and suddenly finds herself unbreakably tied to the unknown dead woman.

Alice is sure Ruby is the key to solving the mystery of her short life and tragic death. Ruby just wants to forget what she saw…but she can’t seem to stop thinking about the young woman she found. If she keeps looking, can she give this unidentified Jane Doe the ending and closure she deserves?

A “heartbreaking, beautiful, and hugely important novel” (Rosie Walsh, New York Times bestselling author), Before You Knew My Name doesn’t just wonder whodunnit—it also asks who was she? And what did she leave behind?

Mini Review – 4/5 stars – A beautifully written and haunting story that intertwines the lives of two women, but like the synopsis says, this is not just another novel about a dead girl. It is so much more. If you’re looking for a fast paced thriller then this is not the book for you. When Ruby finds Alice’s body when she is out jogging, she becomes obsessed with learning more about her life and what led to her murder. I loved how Bublitz focused on creating these women and bringing them to life. It’s about life and death, grief and loss, but it also highlights women and choices – whether it be missed opportunities, taking a chance, or living with regret. Highly recommend.

SUCH SHARP TEETH – Rachel Harrison (Released October 4th, 2022 – Thanks to Berkley Publishing for the gifted copy)

A young woman in need of a transformation finds herself in touch with the animal inside in this gripping, incisive novel from the author of Cackle and The Return.

Rory Morris isn’t thrilled to be moving back to her hometown, even if it is temporary. There are bad memories there. But her twin sister, Scarlett, is pregnant, estranged from the baby’s father, and needs support, so Rory returns to the place she thought she’d put in her rearview. After a night out at a bar where she runs into an old almost-flame, she hits a large animal with her car. And when she gets out to investigate, she’s attacked.

Rory survives, miraculously, but life begins to look and feel different. She’s unnaturally strong, with an aversion to silver–and suddenly the moon has her in its thrall. She’s changing into someone else–something else, maybe even a monster. But does that mean she’s putting those close to her in danger? Or is embracing the wildness inside of her the key to acceptance?

This darkly comedic love story is a brilliantly layered portrait of trauma, rage, and vulnerability.

Mini Review – 4/5 stars – Normally I’m not the biggest fan of much romance in books but I think this had a good balance. Equal parts horror, comedy, and romance with a great main character. This more on the lighter side of the horror spectrum but there were some good creepy moments and who doesn’t love a good werewolf story? I think this was an entertaining and quick read with characters that you really grow attached to. I definitely recommend this one!

A disturbing new vision of terror from the author of Things Have Gotten Worse Since We Last Spoke.

“Each precious thing I show you in this book is a holy relic from the night we both perished-the night when I combed you from my hair and watered the moon with your blood.

Mini Review – 3.5/5 stars – Two things that are basically guaranteed with a book by Eric LaRocca: a stunning cover and some crazy horror that makes you go, what the fuck did I just read? In the best way possible, of course! While I did like Things Have Gotten Worse Since We Last Spoke a little more, this was still quite the ride. I absolutely love how beautifully everything is written, it all flows so nicely and keeps you mesmerized from start to finish. I’m anxious to read more from LaRocca and I’m so happy I have another book already waiting for me!