Here’s another July release! There was something about July 11th because so many books released that day. WATCH ME DISAPPEAR by Janelle Brown was one of those books.

I went into it expecting a thriller, but I’m here to tell you, it’s more of a character driven mystery. So it’s not a fast-paced thriller. Definitely a mystery that keeps you curious and turning the pages.

This is a #CJSReads2017 title for July, and we’ll have our collective thoughts on this one up tomorrow! 🙂 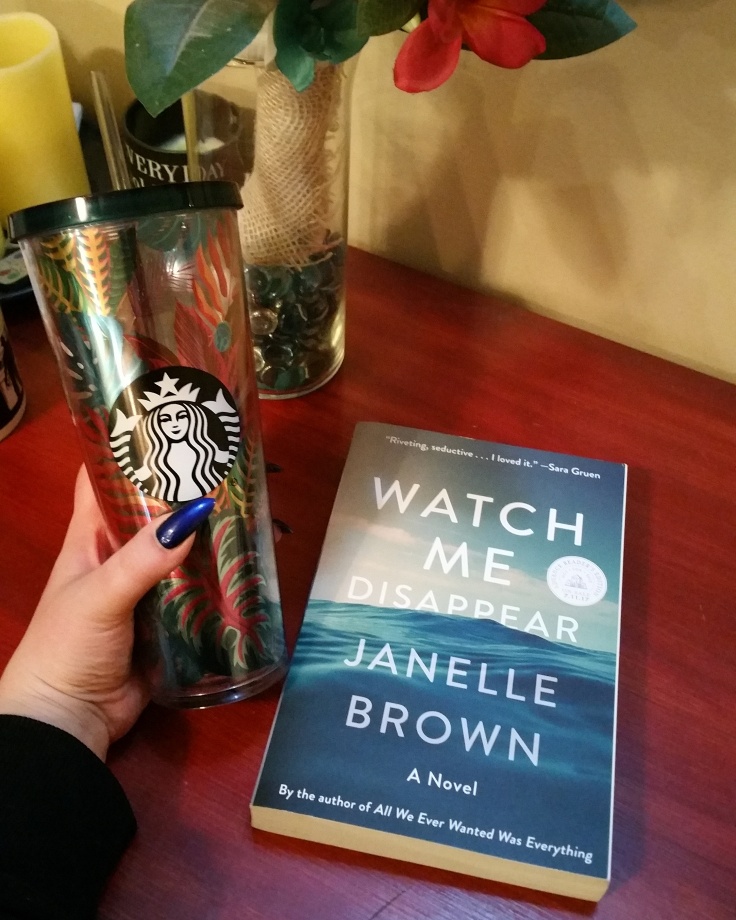 This is my first book by Janelle Brown and I really enjoyed it! I love her writing. That can really set a thriller apart from the rest and that definitely helped with WATCH ME DISAPPEAR. Billie Flanagan has been missing for a year now, but now her daughter Olive is beginning to look more into her disappearance. Do we every truly know those that we love most?

Billie Flanagan, a mother and wife, went on a solo hiking trip to Desolation Wilderness and vanished without a trace. The only evidence of her found on that trail was one hiking boot. Her daughter Olive and husband Jonathan must now learn how to cope with her disappearance.

A year later, when it’s time to sign the death certificate and declare Billie legally dead, Olive begins having waking dreams and hallucinations about her mother. She can’t seem to shake the feeling that she’s still alive.  Jonathan begins to worry about Olive’s stability and begins digging into his wife’s past – he uncovers secrets that makes him question everything he thought he knew about Billie.

This was very well-written and the characters were relatable. It did take some getting used to when it came to the first person then third person viewpoints. I did enjoy the book within a book – after the disappearance went viral, Jonathan was able to get a book deal out of it and he wrote a memoir. So some of the chapters are the articles and passages he was writing.

For those looking for an edge-of-your-seat thriller, then this won’t be what you’re looking for. This is definitely more along the lines of a character driven mystery. It’s much slower in its pacing and is very focused on Jonathan and Olive and how they individually grow throughout the story, as well as how their relationship strengthens through the mystery of Billie.

If you like the whole, “book within a book” and a slower building mystery, then this is a book you should pick up!

I give this one 4/5 stars – I loved the writing and that bumped it up from 3.5/5 stars (I was initially expecting a thriller, not a mystery).

Big thanks to Spiegel & Grau for the advanced copy in exchange for my honest review!

Have you read this one? Remember, check back for Chandra and Sam’s thoughts on this one!

One thought on “Watch Me Disappear – Janelle Brown”