More to round out the month of February!

Thanks to Gallery Books for the free advanced copies in exchange for our honest reviews!

Check out the #allthebookreviews thoughts on this emotional suspense. 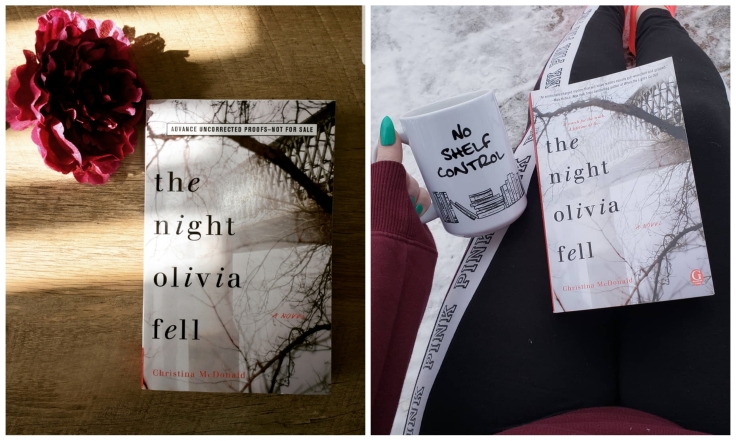 I’m not a mother so I can only imagine what it would feel like to find out that your only child fell of a bridge, is pregnant (surprise!) and the police aren’t doing a very good job at trying to find out if this was an accident or not.

Teeter tottering between Abi’s (the mom) perspective and Olivia’s (the daughter), we see the struggles Abi goes through as she realizes everything she did to try and protect Olivia couldn’t protect her from this.  We also see how Olivia deals with the normal teen angst of peer pressure, mean girls, first loves.. the whole gamut.  Because half of the book was devoted to her perspective, at times this definitely felt like a YA read, which was absolutely ok for me! Mostly predictable, I didn’t realize how invested I was until that ending came.  Anyone reading knows where this road eventually leaves, I was just surprised how much it actually impacted me and this is where the book really shines.  Kudos to McDonald for bringing that much emotion to that scene.

Secrets never stay secrets… that’s just the way life goes.  Sometimes those secrets can be deadly –  never underestimate the anger of a teenager, the depth of a mother’s love or a person’s ability to do whatever they have to in order to protect whatever part of their life they feel is most important.

Another thriller/suspense novel that has my attention immediately from the prologue! THE NIGHT OLIVIA FELL by Christina McDonald is about a mother and daughter, Abigail (Abi) and Olivia. Abi receives a phone call that every parent never wants to get – the hospital informing her that her daughter had had an accident. She fell off the ZigZag Bridge in town and sustained extensive and irreversible brain damage.

We go back and forth between Abi’s perspective (present) and Olivia’s perspective (the months leading up to the night she fell). This was more of a suspense novel than a thriller and it definitely kept me guessing throughout! Who can Abi trust? What really happened to Olivia? Who was responsible for Olivia’s fall? I went back and forth a couple of times but when the reveal came I was happy with that outcome.

This is more than just a whodunit type suspense. This dives into the complicated relationship that exists between a single mother and her daughter. Olivia begins asking questions that Abi is not prepared to face head-on just yet and so begins the unraveling of their dynamic. I think McDonald did a great job fleshing out the characters for us to where they felt authentic. I also think that she wove the timelines together effortlessly to where you didn’t feel lost or like you were missing any kind of information as the story began to build.

I really enjoyed the epilogue at the end because it answered a couple of questions I would have had if the story just ended. If you’re looking for a solid suspense building story and digging up long buried secrets, then this is the one for you! Just be warned, it’s an emotional one! I’ll definitely be picking up more from McDonald after this one.

One thought on “#ATBR2019 – The Night Olivia Fell by Christina McDonald”