We’re squeezing in as many as we can before the month is over!

We’ve reviewed a few of his novels! You can see our reviews for BRING HER HOME (here) and SOMEBODY’S DAUGHTER (here) 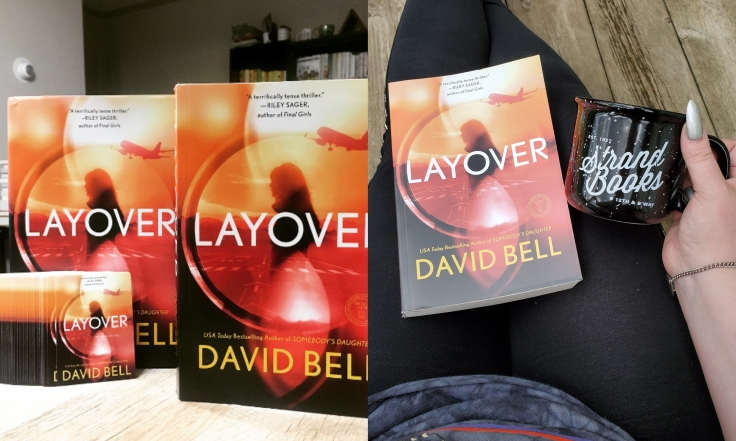 I’m a huge fan of David Bell.  Most of the books I’ve read of his has centered around daughters so color me intrigued when I get something a little different with The Layover.  Joshua meets Morgan in the airport and their brief, but intriguing, conversation causes him to stop playing it safe in life and start tracking her down.  Why is she so secretive? What is she hiding behind her hat and big glasses and why, even though she’s a stranger, does she insist he’ll never see her again?  You’ll think Joshua is nuts and/or creepy for going after her but we wouldn’t have this story without his impulsiveness, now would we? 😉

As usual, the short chapters and writing style of Bell keeps you turning the pages.  The first parts are extremely compelling and have me right inside Joshua’s head while being introduced to Kimberly, a cop looking into the disappearance of a man and becomes involved.  The first little reveal of why Morgan is on the run was a bit underwhelming but I knew Bell had more in store for us readers and I was right.  Towards the middle to last third of the book, things took a little bit of a back seat and the intensity waned a bit.  And where did Kimberly go? Her storyline almost became nil and I needed more from this character.  It all comes together towards the end and I can appreciate where Bell took Joshua’s character.  (I mean, how often do we sit where we’re comfortable in life even if we’re not exactly the happiest?)

I love the nod to Kings Island in the book since I used to go to this amusement park when I lived in Ohio! And cheers to Joshua’s dad – the most understanding of all fathers EVER. While I do think certain parts of the book could’ve been a bit more fleshed out, I did enjoy this story, even though I thought Joshua was incredibly nuts to continually go after this stranger.  I like where Bell took Morgan, but I also wish I had more insight to her story as well.  It’s not a bad thing to want to know more about these characters, right?  Looking forward to what Bell brings us next.

I’ve read a couple other books by Bell and I’ve loved them both. His writing style and ability to weave a great thriller is what keeps me coming back! For those of you looking for a fast-paced thriller, you might end up a little disappointed with LAYOVER. It’s good to know going into it that it’s a little more along the lines of a slower burn suspense novel. That being said, the short chapters keep you flipping the pages and pulling you along.

We all have those little encounters with people throughout life. Ones where you have an interesting conversation with and then you go about your lives, well, that’s a little different in the case of Joshua and Morgan. While at the airport, the two have a brief conversation that has Joshua immediately intrigued with the woman. So much so that he decides to follow her. Just a tad on the creepy side, right? Why is he so obsessed with this stranger? Why does he need to know more about her and why she was so mysterious? So many questions and Bell does a good job getting us into his head.

The beginning of the book had a good pacing to it but that started to slow down after the first half of the book. Which kind of took me out of it, but I liked how he tied together the story in the end. I didn’t necessarily connect with the characters but I couldn’t stop reading to see what would happen to them in the conclusion. Overall, if you’re looking for something on the lighter side of the suspense genre, then this will be perfect for you. Those that frequent the thriller/crime fiction genre might find themselves a little bored. I will continue to pick up Bell’s work and I have plenty of his previous releases to keep me busy until his next release!