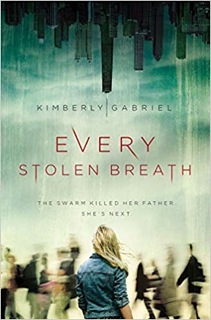 Kicking off the month with a book tour!

The Swarm is unrecognizable, untraceable, and unpredictable—random attacks on the streets of Chicago by a mob of crazed teens that leaves death in its wake. It’s been two years since the last attack, but Lia Finch has found clues that reveal the Swarm is ready to claim a new victim.

Lia is the only one still pursuing her father’s killers, two years after attorney Steven Finch’s murder by the Swarm. Devastated and desperate for answers, Lia will do anything to uncover the reasons behind his death and to stop someone else from being struck down. But due to debilitating asthma and PTSD that leaves her with a tenuous hold on reality, Lia is the last person to mount a crusade on her own.

After a close encounter with the Swarm puts Lia on their radar, she teams up with a teen hacker, a reporter, and a mysterious stranger who knows firsthand how the mob works. Together, they work to uncover the master puppeteer behind the group. Though if Lia and her network don’t stop the person pulling the strings—and fast—Lia may end up the next target.

Inspired by the real-life “flash mob” violence that struck Chicago in 2011, Every Stolen Breath by debut author Kimberly Gabriel is a fast-paced and immersive thriller that shows just how hard one girl will fight back, knowing any breath might be her last.

A solid 4 star read for me – this had all the elements that you want in a quick thriller. This one definitely falls into the YA category of the thriller genre, so if you’re looking for something on the lighter end of the spectrum, then this is perfect for you! EVERY STOLEN BREATH by Kimberly Gabriel had the tension and fast pacing that you crave in a thriller. This was inspired by the real life “flash mob” acts of violence that were seen throughout Chicago in 2011. That alone sets the tone and the entire story feels incredibly real and in the realm of possibility. We always hear about random acts of violence all over the country and I couldn’t imagine being in this situation.

The Swarm is all that they’re known by – a group of teenagers that close in on one victim and attack them to death. No one has been able to track them down or find their identities, but one girl is determined to stop them. Lia’s father was one of The Swarm’s victims two years ago and she has tirelessly worked to try and bring his killers to justice. Lia joins forces with others that want them stopped and she quickly discovers that should could become their next target.

Great characterization and development, the author builds the tension and suspense perfectly, and I couldn’t wait to see how things were going to end. If you’re looking for some fiction based on true events, then I would definitely recommend picking this one up. I hadn’t heard of these attacks in 2011, so once I finished I started looking it up. The author did a great job laying out this story for us and I will be looking for more from her in the future.

Kimberly Gabriel is an English teacher who writes every chance she gets and struggles with laundry avoidance issues. When she’s not teaching or writing, she’s enjoying life with her husband, her three beautiful children, and a seriously beautiful boxer in the northern suburbs of Chicago.