You can see my thoughts on GWENDY’S BUTTON BOX (co-authored with Stephen King) here and the #allthebookreviews thoughts here. This is the sequel, however it is written solely by Richard Chizmar with a foreword from Stephen King. 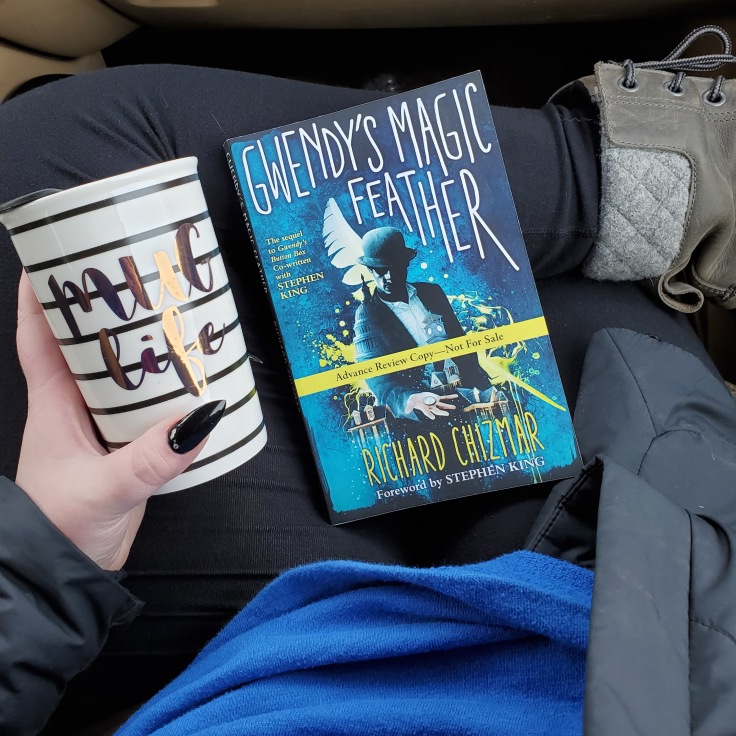 Something evil has swept into the small western Maine town of Castle Rock on the heels of the latest winter storm. Sheriff Norris Ridgewick and his team are desperately searching for two missing girls, but time is running out to bring them home alive.

In Washington D.C., thirty-seven-year-old Gwendy Peterson couldn’t be more different from the self-conscious teenaged girl who once spent a summer running up Castle Rock’s Suicide Stairs. That same summer, she was entrusted – or some might say cursed – with the extraordinary button box by Richard Farris, the mysterious stranger in the black suit. The seductive and powerful box offered Gwendy small gifts in exchange for its care and feeding until Farris eventually returned, promising Gwendy she’d never see the box again.

One day, though, the button box shows up without warning – and without Richard Farris to explain why, or what she’s supposed to do with it. The mysterious reappearance of the box, along with the troubling disappearances in Castle Rock, leads Gwendy home again… where she just might be able to help rescue the missing girls and stop a madman before he does something ghastly.

From New York Times bestseller Richard Chizmar comes Gwendy’s Magic Feather, a breathtaking novel that asks whether our lives are controlled by fate or the choices we make – and what price we might have to pay for those choices when we reach for the things we most desire. Prepare to return again to Stephen King’s Castle Rock, the sleepy little town built on a bedrock of deep, dark secrets, which is about to awaken from its quiet slumber once more.

This is the sequel to GWENDY’S BUTTON BOX that was co-authored by Stephen King. This sequel does include a foreword from King. I really enjoyed GWENDY’S BUTTON BOX when that released. A fun little story that brought us all back to Castle Rock – a place every Constant Reader was excited to revisit. Events throughout this book brings us back again to solve the mystery of two disappearances.

We are back with Gwendy and she’s all grown up. Years ago, the magical button box had been taken from her and she was no longer responsible for keeping it safe. One morning, the box reappears without warning and without Richard Farris. All of this leads her back home to Castle Rock as she thinks this reappearance of the box and the missing girls isn’t just coincidental.

I feel like there wasn’t as much action to keep the pacing consistent, for me. I was able to get through this one fairly quickly considering the length. I think the book did a great job bringing everything together at the end but I guess I was hoping for a little bit more, if that makes sense. I’m happy we got a sequel and the change to reconnect with Gwendy, but I think the first book still comes out ahead as my favorite.