It’s that time of the week – #NewBookTuesday

I know I said it last year and I’m going to say it again now, I’m going to do my absolute best to actually keep up with the new release Tuesdays. So you’ll get to see all the books hitting shelves that day (and week).

I also included any links to reviews! 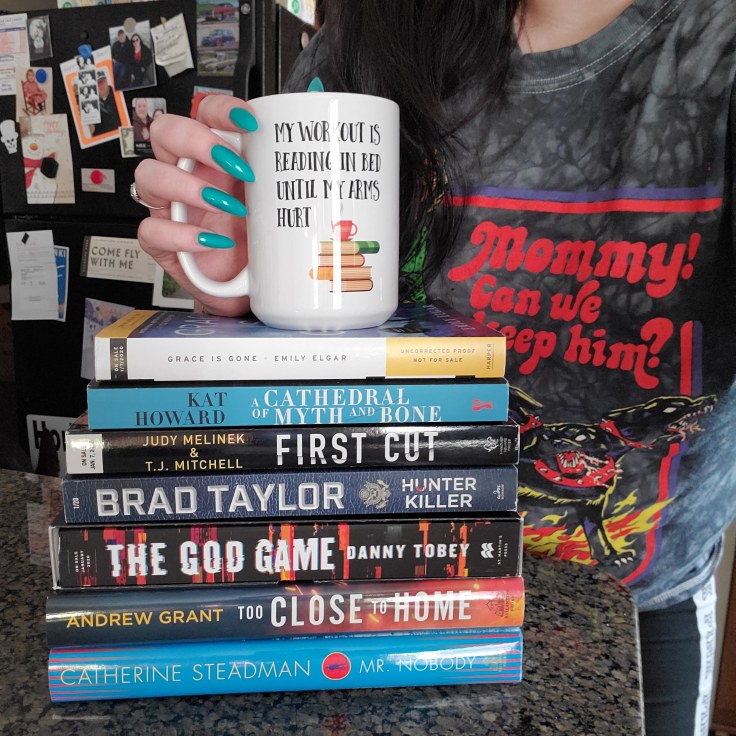 You are invited!
Come inside and play with G.O.D.
Bring your friends!
It’s fun!
But remember the rules. Win and ALL YOUR DREAMS COME TRUE.™ Lose, you die!

With those words, Charlie and his friends enter the G.O.D. Game, a video game run by underground hackers and controlled by a mysterious AI that believes it’s God. Through their phone-screens and high-tech glasses, the teens’ realities blur with a virtual world of creeping vines, smoldering torches, runes, glyphs, gods, and mythical creatures. When they accomplish a mission, the game rewards them with expensive tech, revenge on high-school tormentors, and cash flowing from ATMs. Slaying a hydra and drawing a bloody pentagram as payment to a Greek god seem harmless at first. Fun even.

But then the threatening messages start. Worship me. Obey me. Complete a mission, however cruel, or the game reveals their secrets and crushes their dreams. Tasks that seemed harmless at first take on deadly consequences. Mysterious packages show up at their homes. Shadowy figures start following them, appearing around corners, attacking them in parking garages. Who else is playing this game, and how far will they go to win?

And what of the game’s first promise: win, win big, lose, you die? Dying in a virtual world doesn’t really mean death in real life—does it?

As Charlie and his friends try to find a way out of the game, they realize they’ve been manipulated into a bigger web they can’t escape: an AI that learned its cruelty from watching us.

God is always watching, and He says when the game is done.

A hard-nosed medical examiner. A suspicious case. An underworld plot only she saw coming.

San Francisco’s newest medical examiner, Dr. Jessie Teska, has made a chilling discovery. A suspected overdose case contains hints of something more sinister: a drug lord’s attempt at a murderous cover-up. But as Jessie digs deeper, she faces unexpected pushback from her superiors—and pressure to stay in her lane, close the case and move on.

For Jessie, San Francisco was supposed to be a fresh start, a chance to escape her troublesome past in Los Angeles. Instead she finds herself overworked and underpaid, working in a dingy morgue and living under the fog in a cramped converted cable car. Now, despite warnings from her colleagues and threats from her boss, she is determined to find the truth.

As more bodies land on her autopsy table, Jessie uncovers a constellation of deaths that point to a plot involving opioid traffickers and San Francisco’s shifting terrain of tech start-ups. Autopsy means “see for yourself,” and Jessie Teska won’t stop until she has seen it all—even if it means the next corpse on the slab could be her own.

TOO CLOSE TO HOME – Andrew Grant

His cover: courthouse janitor. His cause: justice. But when Paul McGrath uncovers a shocking connection to a file of missing evidence, he finds the truth sometimes hits a little too close to home.

As an intelligence agent-turned-courthouse janitor, Paul McGrath notices everything and everyone–but no one notices him. It’s the perfect cover for the justice he seeks for both his father and the people who’ve been wronged by a corrupt system. Now McGrath has discovered a missing file on Alex Pardew–the man who defrauded and likely murdered his father but avoided conviction, thanks in large part to the loss of this very file. And what lies behind its disappearance is even worse than McGrath had feared.

Meanwhile, at the courthouse, McGrath stumbles onto the case of Len Hendrie, a small businessman who’s been accused of torching a venture capitalist’s mansion in Westchester. Hendrie admits to starting the fire, but then McGrath learns how the investor has preyed on average Joes to benefit himself–and his extensive wine collection. McGrath can’t resist looking deeper into this financial predator, and he soon finds himself in a grey area between his avenging moral compass and the limits of the law.

Then, just as the Hendrie case is heating up, McGrath receives word of the death of his father’s former housekeeper, sending him back to his family home to confront unfinished business from his past. And he’s about to find some unwelcome truths about the mother he lost as a child–and the father who hid even more secrets than he realized.

A psychiatrist treating a man with no memory discovers that her patient knows far more about her past than his own in a gripping psychological thriller from the New York Times bestselling author of Something in the Water.

Who is Mr. Nobody?

When a man is found on a British beach, drifting in and out of consciousness, with no identification and unable to speak, interest in him is sparked immediately. From the hospital staff who find themselves inexplicably drawn to him, to international medical experts who are baffled by him, to the national press who call him Mr. Nobody, everyone wants answers. Who is this man? And what happened to him?

Some memories are best forgotten.

Neuropsychiatrist Dr. Emma Lewis is asked to assess the patient in a small town deep in the English countryside. This is her field of expertise, this is the chance she’s been waiting for, and this case could make her name known across the world. But therein lies the danger. Emma left this same town fourteen years ago and has taken great pains to cover all traces of her past since then.

But now something—or someone—is calling her back. And the more time she spends with her patient, the more alarmed she becomes that he knows the one thing about her that nobody is supposed to know.

From the bestselling author of If You Knew Her comes this harrowing tale of suspense—a story ripped from today’s headlines—of a tight-knit English community, who’s rocked by the murder of a mother and the mysterious disappearance of her daughter, and the secrets that lie concealed beneath a carefully constructed facade.

A shocking, senseless crime—and the dark secret at the heart of it all.

Everyone in Ashford, Cornwall, knows Meg Nichols and her daughter, Grace. Meg has been selflessly caring for Grace for years, and Grace—smiling and optimistic in spite of her many illnesses—adores her mother. So when Meg is found brutally bludgeoned in her bed and her daughter missing, the community is rocked. Meg had lived in terror of her abusive, unstable ex, convinced that he would return to try and kidnap Grace…as he had once before. Now it appears her fear was justified.

Jon Katrin, a local journalist, knows he should avoid getting drawn back into this story. The article he wrote about Meg and Grace caused rifts within his marriage and the town. Perhaps if he can help find Grace, he can atone for previous lapses in judgment. The Nichols’ neighbor, Cara—contending with her own guilt over not being a better friend to Grace—becomes an unexpected ally. But in searching for Grace, Jon and Cara uncover anomalies that lead to more and more questions.

Through multiple viewpoints and diary entries, the truth about Grace emerges, revealing a tragedy more twisted than anyone could have ever imagined…

In these sixteen exquisite stories Kat Howard deftly weaves in and out of the countries of myth and hagiography to write the lives of women untold and unexplored.

A woman being written into her boyfriend’s fiction is at first flattered to be his muse, but then finds her real life literally consumed and overtaken by his. A desperate young woman makes a prayer to the Saint of Sidewalks, but the miracle she receives isn’t what she expected. A painter spies a naked man, crouched by the Cathedral of St. John the Divine, transform into a beautiful white bird and decides to paint him, and becomes involved in his curse. Jeanne, a duelist and a sacred blade for God and Her holy saints, finds that the price of truth is always blood. And in the novella “Once, Future” Howard reimagines the Arthurian romance on a modern college campus as a story that is told, and told again, until the ending is right.