Our third book from C.J Tudor as the #allthebookreviews duo 🙂

Thanks to Random House for the free early copies in exchange for our honest reviews. 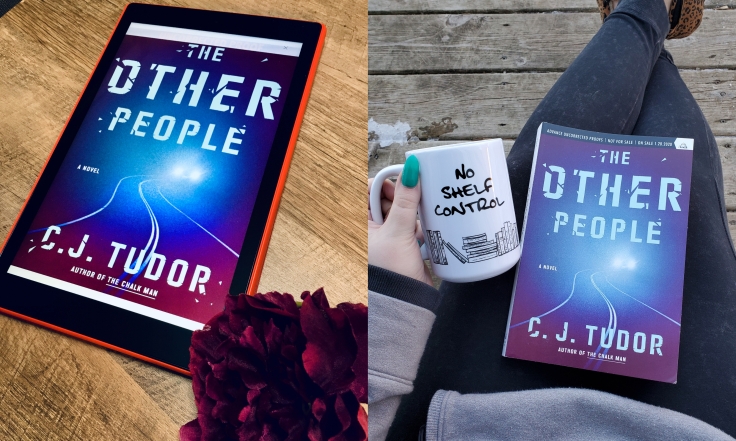 In Tudor’s The Chalk Man and The Hiding Place, we get more subtle, suspenseful burn into a dark thriller, bordering on horror, type of read. With The Other People, we get short chapters that read quickly and pulls you in by your collar and continually shakes you as you progress.

I’ve been seeing this tit-for-tat type of dark thriller read lately and I am here for every bit of it. Everyone goes through pain. Everyone wants justice and/or revenge. Everyone has family they care about. But not everyone gets a chance to rectify a situation they think went wrong. For better or worse, you are married into your decision and you do NOT want to fuck with The Other People.

There seems to be a lot going on with this read. We have many different POVs that luckily never get confusing. Past and present timelines interweave throughout but never gets muddled. At first you’re wondering how these characters and timelines meld and make sense but once you get it, it’s pretty genius. I felt for Gabe. I loved Fran and Alice. I flew through the pages wanting to know exactly how their stories would collide… and collide they did.

The only thing I didn’t particularly care for was the supernatural twinge. I didn’t feel it was necessary for the story line and didn’t lend itself to make this a *better* read. It read just fine as a darker thriller without any horror necessary. Horror is already well enough written within the people this book represents. Despite this (which weirdly doesn’t play as huge a part as it may seem), I was captivated and involved with this story… and every time I felt Tudor was going to leave me hanging, I got the answers I wanted and needed.

This is my third book by C.J. Tudor and I still haven’t been disappointed! Her first two novels definitely had a different feel to them than this one – more of a slower burning suspense and bordering into the more horror genre. However, with THE OTHER PEOPLE, it has the shorter chapters that help kept the pacing up for me. This format, along with the multiple POVs, had more of a thriller feel than the other two.

Gabe is a man in mourning – years ago his wife and daughter were murdered. As if that isn’t horrible and traumatic enough, he believes to his core that his daughter is still alive. He is determined to find her and the mysterious van he swears he saw her in that day. We get three main points of view throughout the book and go through past and present. It seems that there’s no way that these three will connect, but man when they do, they come colliding together in the end. I think Tudor did a phenomenal job bringing everything together for us and still maintaining a creepy and sinister tone throughout the book.

Like other reviewers, I wasn’t the biggest fan of the supernatural element in this book, but that didn’t necessarily take away from the story for me. Took a little for me to get fully sucked in, but once I was then there was no putting this book down! If you’re going into this expecting more of a horror book like her previous two, then you may be a little let down. This is perfect for those looking for a solid thriller! I can’t wait to see what Tudor will have in store for us next.