You can see our thoughts on their other books! THE UNHONEYMOONERS (here), TWICE IN A BLUE MOON (here), and MY FAVORITE HALF-NIGHT STAND (here) 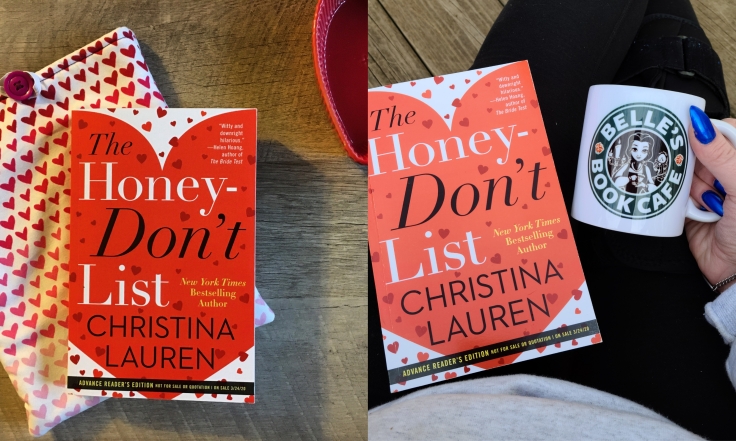 Carey Douglas has worked for home remodeling and design gurus Melissa and Rusty Tripp for nearly a decade. A country girl at heart, Carey started in their first store at sixteen, and—more than anyone would suspect—has helped them build an empire. With a new show and a book about to launch, the Tripps are on the verge of superstardom. There’s only one problem: America’s favorite couple can’t stand each other.

James McCann, MIT graduate and engineering genius, was originally hired as a structural engineer, but the job isn’t all he thought it’d be. The last straw? Both he and Carey must go on book tour with the Tripps and keep the wheels from falling off the proverbial bus.

Unfortunately, neither of them is in any position to quit. Carey needs health insurance, and James has been promised the role of a lifetime if he can just keep the couple on track for a few more weeks. While road-tripping with the Tripps up the West Coast, Carey and James vow to work together to keep their bosses’ secrets hidden, and their own jobs secure. But if they stop playing along—and start playing for keeps—they may have the chance to build something beautiful together…

From the “hilariously zany and heartfelt” (Booklist) Christina Lauren comes a romantic comedy that proves if it’s broke, you might as well fix it.

Let me start by saying how much I love how these authors write.  I think because of the other books I’ve read by them, expectations of a funnier, rom-com type feel was expected and instead we get something a little bit more serious, which I was totally fine with.  This was still an easy, binge read!

Oh boy.. the Tripps… ugh. Just ugh.  I did not like this couple at all, but you’re not supposed to.  They epitomize that couple that grew quickly within their field and then became entitled pricks because of it.  I did like the characters of Carey and James but their relationship seemed very rushed.  Like with all contemporary romance type novels, we see instaloves a lot but these two worked together just for a couple of months and then when forced to be in the same vicinity for two weeks, it’s a roller coaster of things turned into… well, that escalated quickly, let me tell you!  I wish there had just been a little bit more development here.  The same formula is at work here so we know what’s going to happen.

I do appreciate how the authors incorporated dystonia disorder and showcased how botox can be used for something other than repressing the emotions on your face.  😉  But seriously, this is a disorder I didn’t know about before and reading about it in the acknowledgments portion made me appreciate this within the book itself. Big props for this education.

While this may not have been my favorite by this duo, it’s still a well done and entertaining read.  It’s not quite as comical and doesn’t give you the belly laughs some of their prior works have but it still holds that Christina Lauren touch that we do love…

This is my fourth outing with the duo that is Christina Lauren and I know I’m always in for a binge read when I pick up one of their books! I would categorize THE HONEY-DON’T LIST as more of a women’s fiction novel as opposed to a rom-com that we come to expect from this duo. It was still a really quick read!

Casey and James are the assistants to the hugely popular power couple Melissa and Rusty Tripps. The Tripps have their home remodeling and designing show and have a book set to release. The only problem? They aren’t exactly the happiest married couple. So now Casey and James must keep everything together on their tour.

The Tripps are just awful and entitled – I can pretty much guarantee no one liked them while reading this. But there’s gotta be something to bring our budding couple together in this contemporary romance. I wish we got more of Casey and James as opposed to the seemingly never-ending drama of the Tripps.

If you’re a fan of Christina Lauren then go into this knowing that it’ll be a little different than what you’re expecting. A different vibe and less of the snarky and witty banter like in their previous books. I will still pick up whatever they release and would recommend those to that enjoy women’s fiction.