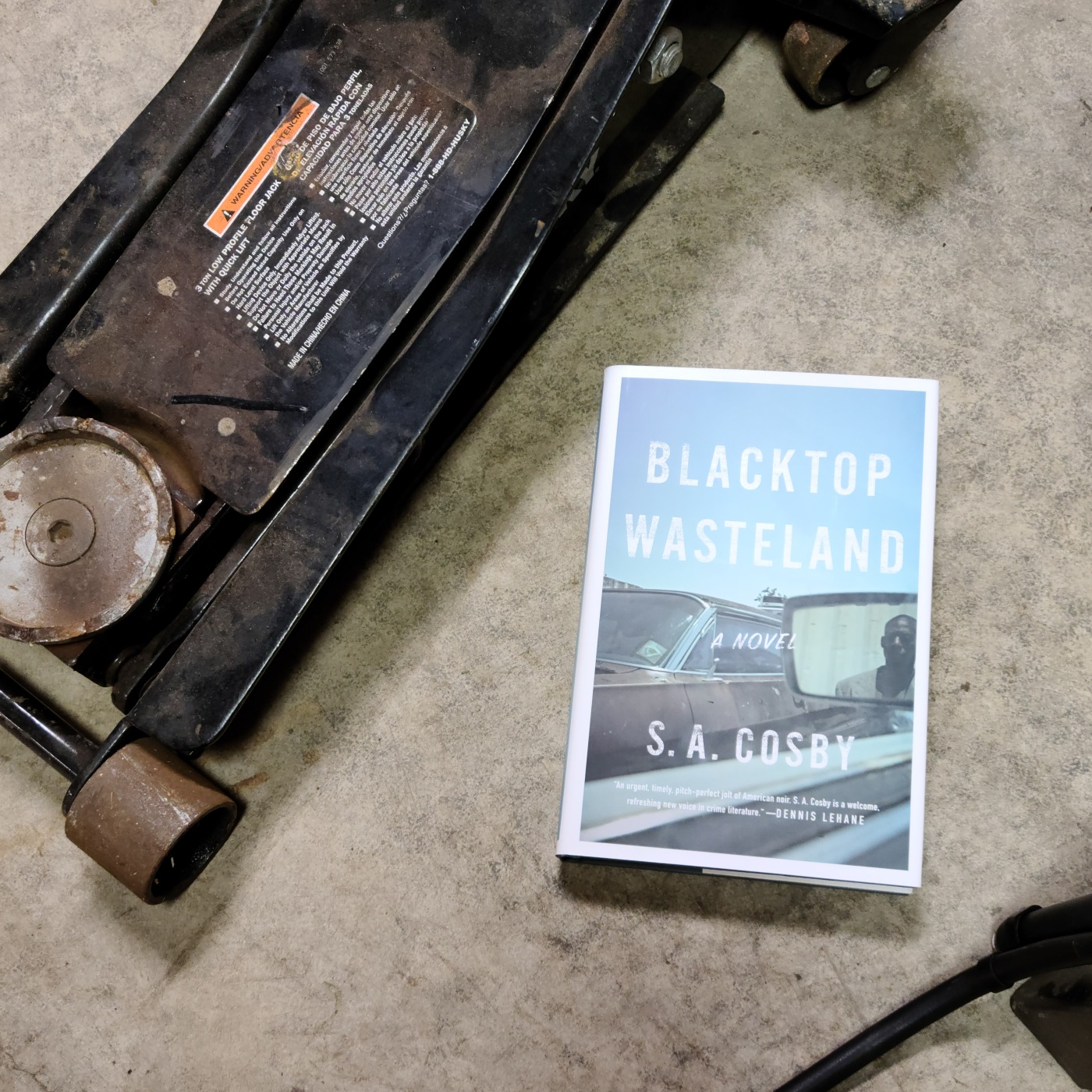 What’s one of your top books from the year so far? For me, that would be BLACKTOP WASTELAND by S.A. Cosby. One of those books that I started and finished in an evening and one that I can’t stop recommending.

Beauregard “Bug” Montage is an honest mechanic, a loving husband, and a hard-working dad. Bug knows there’s no future in the man he used to be: known from the hills of North Carolina to the beaches of Florida as the best wheelman on the East Coast.

He thought he’d left all that behind him, but as his carefully built new life begins to crumble, he finds himself drawn inexorably back into a world of blood and bullets. When a smooth-talking former associate comes calling with a can’t-miss jewelry store heist, Bug feels he has no choice but to get back in the driver’s seat. And Bug is at his best where the scent of gasoline mixes with the smell of fear.

Haunted by the ghost of who he used to be and the father who disappeared when he needed him most, Bug must find a way to navigate this blacktop wasteland…or die trying.

Like Ocean’s Eleven meets Drive, with a Southern noir twist, S. A. Cosby’s Blacktop Wasteland is a searing, operatic story of a man pushed to his limits by poverty, race, and his own former life of crime.

This book. I sat down on Saturday afternoon to take a break from some cleaning and the next thing I knew I was finishing the book. I couldn’t put it down! This was my introduction to S.A. Cosby and I don’t know how I hadn’t heard of him before. BLACKTOP WASTELAND has already found it’s place as one of my top books for 2020. You need to get this book, like ASAP.

We meet Beauregard “Bug” Montage, he is a man trying to live an honest life and do right by his family. Our introduction to him really set the tone to the entire book and gave us so much character development in just one chapter and that only continued throughout the story. Bug is such a multifaceted and complex character with his inner struggles between making an honest living and wanting to take care of his family. He had followed in his father’s footsteps and became one of, if not the best, getaway driver for any jobs he was needed for. All hell breaks loose when he is recruited for one more job with an old colleague, Ronnie. You will find yourself absolutely hating this man. I don’t normally have reactions like that while I read, and let me tell you, Ronnie was such a frustrating character.

The dynamic between Bug and his wife and kids felt so real. The interactions and struggles they experience together. Some moments will make your heart ache for them but there are some lighter moments to give the book some levity. The rollercoaster that the author takes us on made for a read that I literally read cover-to-cover without even realizing it. I sat down with the book to take a break in packing up some stuff and getting boxes together for donations, and the next thing I knew it was dark outside and the book was done. That last page! I need more of this story, but I think it was so fitting!

This book played out in my head as a movie and I hope that this gets to be adapted. The driving scenes were so well detailed that you felt like you were there and the author did a fantastic job creating the suspense during Bug’s “one last job”. The comparison to Ocean’s Eleven and Driver is spot on and if either of those films interests you, then do yourself a favor and pick this book up.

S. A. Cosby is a writer from Southeastern Virginia. He won the 2019 Anthony Award for Best Short Story for “The Grass Beneath My Feet”, and his previous books include Brotherhood of the Blade and My Darkest Prayer. He resides in Gloucester, Virginia. When not writing, he is an avid hiker and chess player.