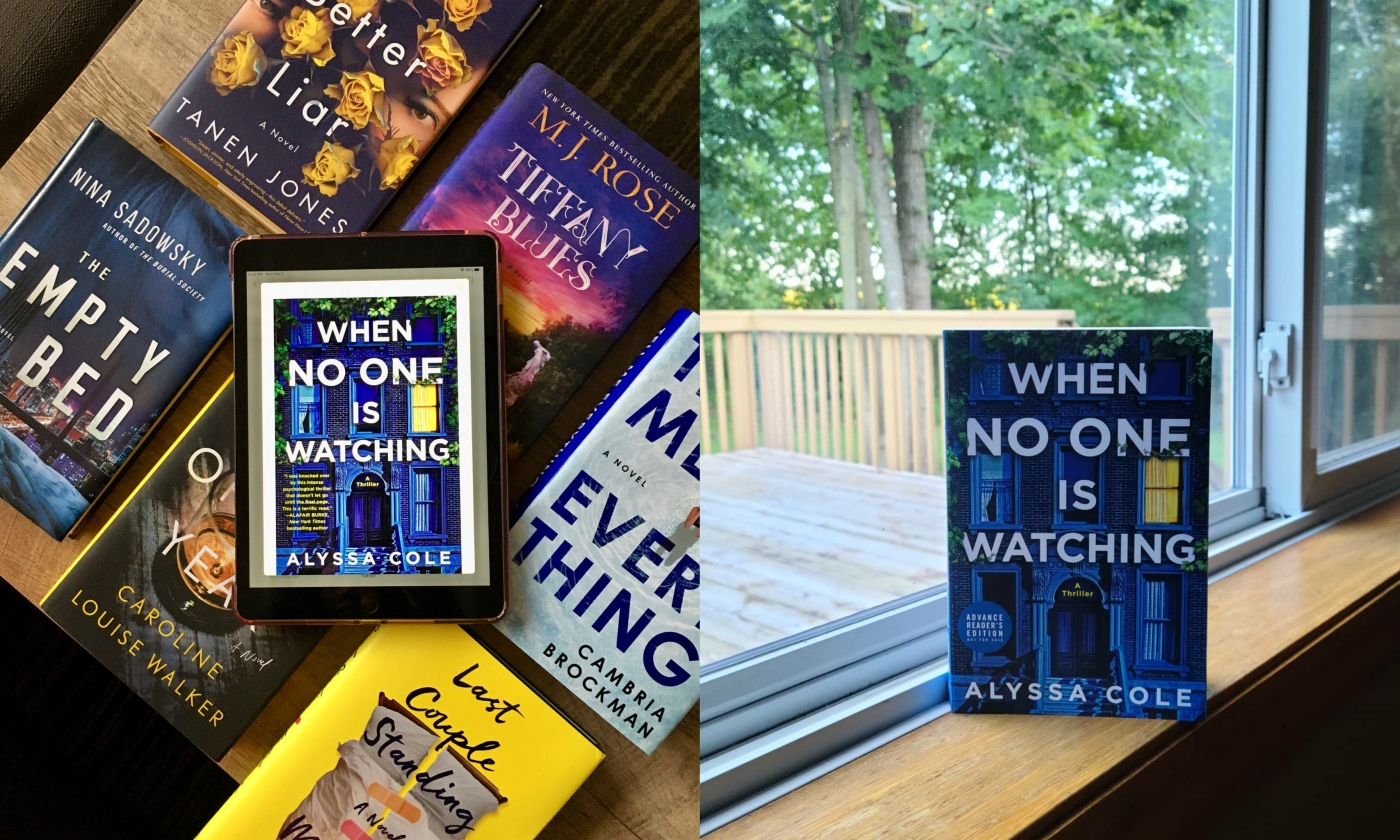 WHEN NO ONE IS WATCHING – Alyssa Cole (Released September 1st, 2020)

Rear Window meets Get Out in this gripping thriller from a critically acclaimed and New York Times Notable author, in which the gentrification of a Brooklyn neighborhood takes on a sinister new meaning…

Sydney Green is Brooklyn born and raised, but her beloved neighborhood seems to change every time she blinks. Condos are sprouting like weeds, FOR SALE signs are popping up overnight, and the neighbors she’s known all her life are disappearing. To hold onto her community’s past and present, Sydney channels her frustration into a walking tour and finds an unlikely and unwanted assistant in one of the new arrivals to the block—her neighbor Theo.

But Sydney and Theo’s deep dive into history quickly becomes a dizzying descent into paranoia and fear. Their neighbors may not have moved to the suburbs after all, and the push to revitalize the community may be more deadly than advertised.

When does coincidence become conspiracy? Where do people go when gentrification pushes them out? Can Sydney and Theo trust each other—or themselves—long enough to find out before they too disappear?

Holy Howdy Doodies!! This is THE thriller of the year for me.  Cole comes out swinging and all the punches land… HARD.  As a New Yorker – even in only the twelve years of living here, I’ve seen neighborhoods change dramatically over time.  Gentrification, as we know, is all too true a thing that occurs… and hopefully not as heinously as where this one took us, but to be honest, I wouldn’t be at all surprised if it did.

Not only does Cole deliver us a heart wrenching thriller, she also teaches us all a historical lesson that is absolutely timely and something we should be paying attention to.  How seamlessly she threads this into this novel is nothing short of impressive.  She also brings us very complex characters.  Mainly we are introduced to Sydney and Theo.  Sydney is a strong Black woman whose past makes her think that what she is witnessing may just be in her head… but things are just NOT adding up and she really has no one to turn to as she tries to navigate through her days.  Theo is a poor White man trying to live in a rich person’s world and came into the neighborhood already failing.  Their meeting brings about a turbulence of emotions from both sides as they both start to learn some vital lessons.  I truly did enjoy their interactions – how he never gave up and how she constantly checked him.  I also appreciate that the romance aspect of this never felt forced or necessary – but felt like a true movement within the book as it should have been.

There were a lot of scenes that I cringed at.  The interaction at the deli, the iPad messages to name a couple and the garden scene had me in TEARS. The microaggressions and also the blatant racist remarks and actions had my blood boiling!  Kim is a fucking bitch and if I could’ve put my hands through the pages, I would’ve strangled her.  But this is where this book also shines.  While Sydney and Theo are the main characters, the tertiary characters were so very vivid that you could see them so clearly!  Mr. Perkins and Gracie are my absolute favorites.

Admittedly, the first almost half of the book has you wondering why this is in the thriller category – but hold on to your panties, because when it comes, it COMES… and it comes FAST.  While the pacing may seem off to some, I actually think the build up of it all resonates with how these things actually do happen – with hints and tiny clues and then slaps you upside the head when you least expect it.

I could go on and on about how much I love this book.  But I’ve rambled long enough.  Read this. Please.  Cole gives us something new in the thriller category and I appreciate that so much.  And I’ll just end by saying, I’ll never see the word taupe again without laughing.  If you know, you know! 😉

This was my introduction to Alyssa Cole’s books. I had seen that she did mainly romance novels before this debut into the thriller genre, and I’ll admit that I was mildly skeptical, but I had seen so many glowing reviews. Well, let me tell you, I was so wrong to be skeptical because this is one of my favorite thrillers of the year! WHEN NO ONE IS WATCHING had me glued from the first page until the last.

From the start I was amazed at how much history the author added into the book. I know that may sound like it could slow down the story but it was so effortless and really contributed to the pacing. I loved learning more about an area that I didn’t know much about. To top it off, we get building tension, and complex characters that you won’t soon forget. We meet Sydney, a young Black woman that returns to her neighborhood and is stunned at how it’s almost unrecognizable. All the neighbors she once knew have all changed and the neighborhood has been taken over by gentrification. To combat this and keep the spirit of her neighborhood alive, Sydney decides to curate a walking tour to highlight the Black history and culture of the area. She gets an unlikely partner in this venture, her white neighbor Theo.

The more they research the more Sydney starts noticing things in her neighborhood. Is she imagining it? Can she trust Theo? Is it just a conspiracy? Or is there something darker happening? Oh my god, there are some parts that will just make your blood boil – the blatant racism, the microaggressions – you’ll find yourself truly hating some of these characters. Towards the beginning I was questioning how it fit into the thriller genre because it felt a little more like a slower suspense novel. Oh man, once it picks up it just goes! The only reason I took off a little bit was because towards the end some of the pacing felt a little odd to me, or maybe it was a lot happening at once. Overall, this was incredible and I highly recommend this to those that are sick of the same story in the thriller genre.