Oh hey everyone! So, as I’m sure you all know, the Bookstagram community is a great place to meet other book nerds, but it’s also a great way to meet some awesome new authors. One of the first few that I had made a connection with was Michael Reid Jr.

He was having a giveaway for a free copy of his debut novel – DEBT OF FEAR. While I didn’t win it, I did order a signed copy from him 🙂 I devoured that book in one sitting. I couldn’t put it down, so naturally, I was super excited to get my hands on his sophomore novel, THE BEYOND EXPERIENCE. I’m going to tackle that bad boy in July (which means next week). I know that everyone’s favorite duo, The Grimdragons, are going to be reading it in July, too!

So my real question is, have you read this author? 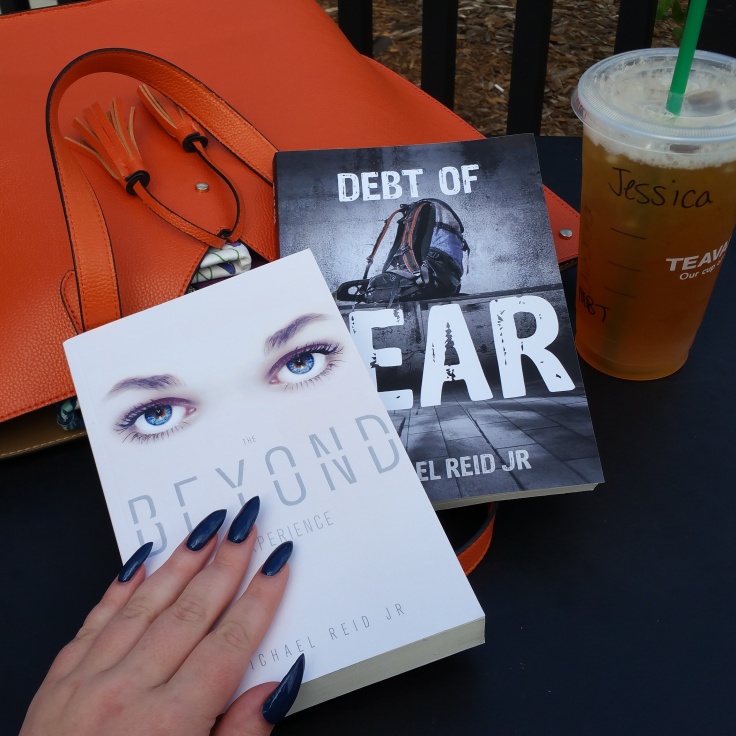 Talk about a high suspense and thrilling ride from author Michael Reid Jr. His debut novel, DEBT OF FEAR, grabs you and doesn’t let go until the end. Retired Marine, Logan Falcone, is secretly called back into duty to help track down a terrorist cell inside the US, but as his mission deepens, he stumbles upon something much more terrifying.

Logan gets a call one night from his ex girlfriend, Samantha, and just like that he is catapulted out of retirement. Samantha, who now works for the FBI, informs him on a terrorist attack in Paris that could potentially have American ties, and then a second attack on Chicago is proving their worst fear. There’s a new terrorist cell in the United States. By utilizing his old connections, some recon Marines, and whatever help Samantha can give (without compromising her job), Logan begins to worry that he won’t be able to be who he once was in these situations. Sameet is a US Army hero turned traitor. His life changed forever after a chance encounter ended in his father’s death. He must now make life defining decisions to make it through each day. It all comes to an action packed head when they finally have to come face to face.

We go between two perspectives, that of Logan and that of Sameet. Both former military but one is retired and one is a soldier turned terrorist. The author does an incredible job bringing the readers into the minds of both these characters; how they’re driven by their experiences and their emotions. Logan’s experiences in Iraq have left deep mental and emotional scars, while Sameet is driven by the death of his father, even if it goes against his morals.<

Reid definitely did his research for this novel! The military jargon and terminology was great. While most people aren’t huge fans of anything too political, this is so fast and suspenseful that you won’t even realize you’re reading a political/military thriller. I think what made this experience even better is that this could definitely be a reality. We have terrorist attacks going on in the world constantly, and the theories that the government is somehow involved are always present.

So if you want a well-written, character driven, and action packed suspense novel, then look no further! I’m so excited for book two in the series to come out.

“An emotional medical suspense novel that flirts with science fiction, and the premise of visiting the afterlife.”

Dr. Lewis had always found a way to hide his deepest secrets: the abuse as a child, the loss of his fiancé, the reasons why he rejected the lucrative offer from Harvard. But, when Kyle, his lab assistant, convinces him to push the limits of the drugs he’d spent a decade perfecting, his lies begin to unravel.

Kyle’s emotional events during treatment forced him to believe it was an event on another plane of life, a spiritual experience at its highest echelon. Thousands of people all over the world were experiencing similar events to Kyle’s, claiming they’d been to heaven. However, Dr. Lewis disagreed, and spent countless hours searching for a neural pathway within the brain itself as the source of the augmented reality.

More secrets, lies, and love drive the two close friends apart, beginning a cascade of events that point Dr. Lewis toward entering The Beyond Experience himself. He fought the treatment for nearly two decades, convinced his terrifying past would confront him. What he experiences becomes far more world shattering than he’d ever imagined possible, but will finally give him the answer to why his fiancé, Lily, had spoken her haunting final words: “forgive me.”

I can’t wait to give you guys my review of THE BEYOND EXPERIENCE – hopefully in the next week or so! Not only is his writing great, but he’s a really nice guy and very interactive with his readers on Instagram. It’s so much fun being able to talk to the different authors and get to know them. So don’t be shy! Go check him out!

Thanks and let me know your thoughts on his books! I love a good discussion!

2 thoughts on “Have You Read this Author – Michael Reid Jr”