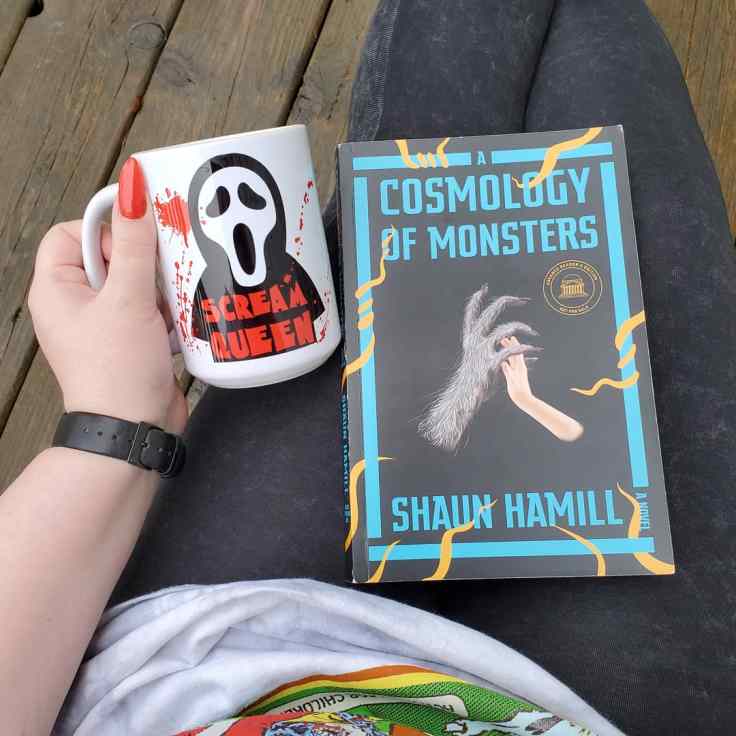 His father saw them–and built a shrine to them with The Wandering Dark, an immersive horror experience that the whole family operates.

His practical mother has caught glimpses of terrors but refuses to believe–too focused on keeping the family from falling apart.

And his eldest sister, the dramatic and vulnerable Sydney, won’t admit to seeing anything but the beckoning glow of the spotlight . . . until it swallows her up.

Noah Turner sees monsters. But, unlike his family, Noah chooses to let them in . . .

This was completely different than I was expecting it to be. A COSMOLOGY OF MONSTERS is more than just a book about monsters, it’s so much more. Shaun Hamill brings us on an engrossing story of not only monsters, but the effect it has on the Turner family. Dark, creepy, and incredibly unique – this is the kind of horror story I needed. I finished this in two sittings and couldn’t put it down.

It’s really hard to put my thoughts into words without ruining the story. I think this is one that’s better to go into blind so that you can fully experience it. The Turner family has a darkness following them and each family member has a different way of coping. While Noah’s parents (Harry and Margaret) live in denial, his sisters (Sydney and Eunice) try to throw themselves into their hobbies, but Noah, he has a different approach. One night, when he was 6 years old, Noah hears a scratching at his bedroom window. He comes face to face with a monster, and instead of being gripped with fear he decides to let his new friend inside.

Told in a linear narrative, with script sections scattered at the end of each section (these will all culminate in the end), we get glimpses of the past without a jumping timeline. There’s enough background information sprinkled throughout to set the tone and help explain how the Turner family got to where they are now. Hamill develops these characters so well – they all have their own unique voice and we feel their struggles and really connect with them.

This was such a unique read with plenty of chills and grisly details. I found myself looking over my shoulder and pulling the curtains closed a little tighter that night. I know some of the topics covered won’t be for all readers, but if you’re looking for something that will send a chill down your spine, then you need to pick this one up for the fall season. I can’t believe this is a debut novel, I can’t wait to see what Hamill releases next!

3 thoughts on “A Cosmology of Monsters – Shaun Hamill”