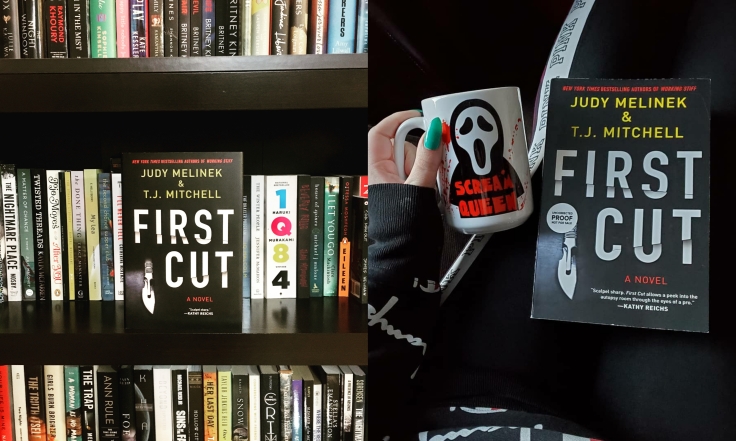 A young rookie medical examiner. A suspicious case. An underworld plot only she saw coming.

For San Francisco’s newest medical examiner, Dr. Jessie Teska, it was supposed to be a fresh start. A new job in a new city. A way to escape her own dark past.

Instead she faces a chilling discovery when an opioid-overdose case contains hints of something more sinister. Jessie’s superiors urge her to close the case, but as more bodies land on her autopsy table, she uncovers a constellation of deaths that point to an elaborate plot involving drug dealers and Bitcoin brokers.

Autopsy means “see for yourself,” and Jessie Teska won’t stop until she has seen it all—even if it means that the next corpse on the table could be her own.

YES YES YES! I absolutely LOVED this book! Co-written by Judy (a forensic pathologist) and her husband (a screenplay consultant), we see their professions SHINE throughout this read.  As a debut novel in a medical examiner detective-fiction series, you best believe I’ll be continuing on and keeping an eye out for the next one.

I will say though, that there is a lot of medical terminology and intimate details about the job of a medical examiner and if these things aren’t your cup of tea, then this might not be the read for you.  However, if you enjoy the intricacies of this type of work, I highly recommend you read this.  While some readers might find it a bit bogged down with the every day detail, I was truly fascinated (and this makes me want to go back and read Working Stiff, Melenik’s memoir).

Now, if we’re looking at the pure fiction story, I do wish there was a just a bit more depth with our main character, Jessie.  I was missing just a bit of that feeling of connecting fully with her character as she became a one woman crusader with a case that seemed a bit fishy.  But hey, as Jessi would say, “not my circus… not my monkeys”.  I certainly had fun with watching the whole process unfold.  Did things get a little convoluted? Maybe.  Did I love her Beagle named Beagle? Absolutely!

Regardless of the minor things I may have had issue with, I’m still rating this a full 5 stars because I just couldn’t put this book down (thank god for a long day at work that consisted mostly of emails and waiting for answers) and when I turned that last page, I was smiling.  That for me, folks, is a winner.

I had heard great things about WORKING STIFFS and even have it sitting on my shelf waiting to be read. After reading FIRST CUT, I’ll be picking it up sooner than I anticipated! Going into this one, it’s good knowing that it is very detailed and technical when it comes to the autopsy portions of the book. Having been written by a former Medical Examiner we get the expertise we might not normally get in fiction. The author’s experience and knowledge shines through in this book but I can see it slowing the pacing for some readers. I found it fascinating!

Dr. Jessie Teska has accepted a new job as the Medical Examiner in San Francisco and she is immediately plunged into the chilling world of drug lords and their criminal network. A series of deaths and all seem to be linked and all are made to appear as overdoses – but is there more than meets the eye? The deeper she gets and the more autopsies she performs she knows she’s getting closer and closer to something big, but could she be risking her own life?

Plenty of suspense and I felt it had a good pacing. Again, I think how technical some parts are when it comes to the autopsies could slow the pacing for some readers. If this topic and profession fascinates you, then I think it will move quickly and keep your attention! Overall, I loved Jessie and learning more about her job and what it all entails. I will be picking up WORKING STIFF soon and hope to see more from this writing duo