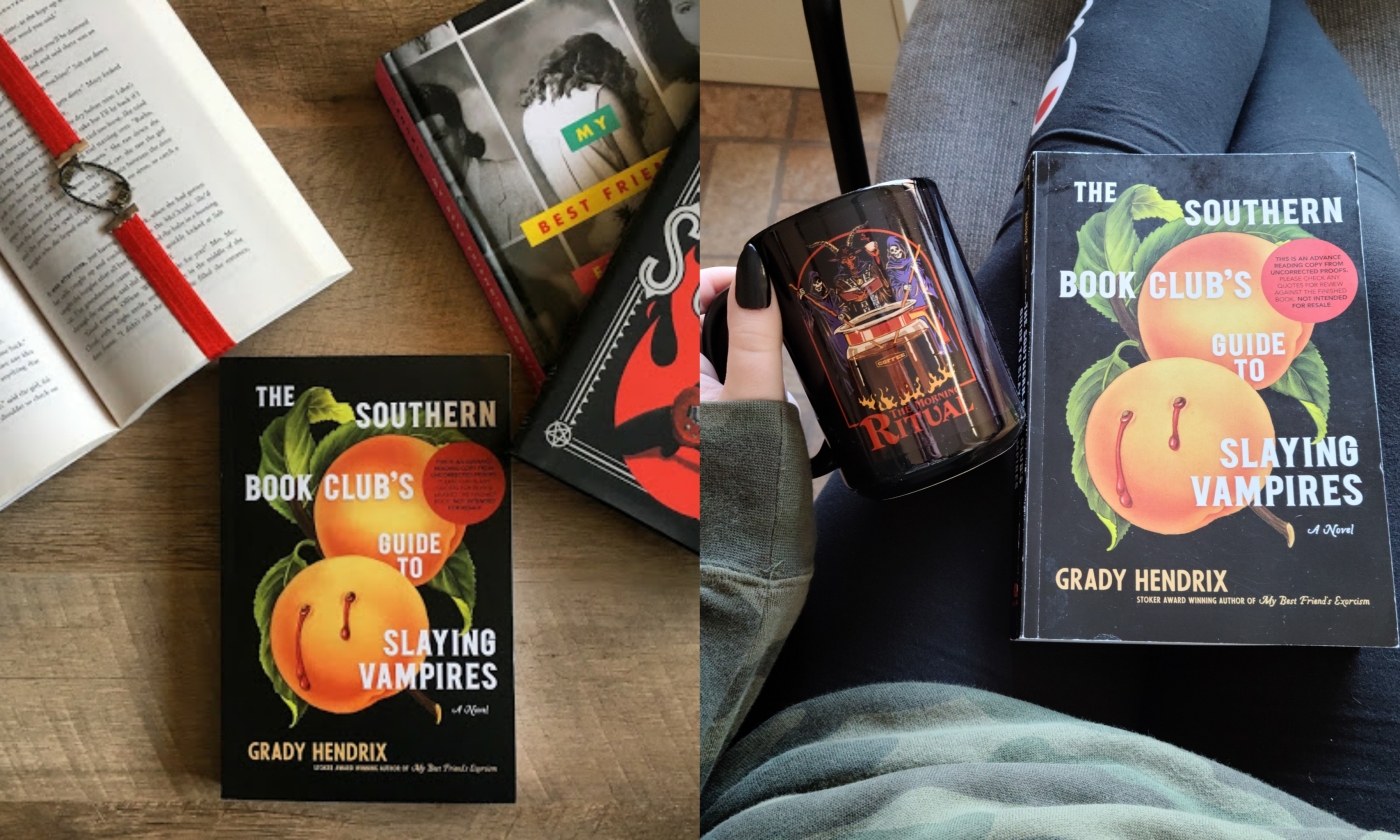 April is off to a great start!

You can see our thoughts on some of his other books: MY BEST FRIEND’S EXORCISM (here), HORRORSTOR (here), and PAPERBACKS FROM HELL (here)

Fried Green Tomatoes and “Steel Magnolias” meet Dracula in this Southern-flavored supernatural thriller set in the ’90s about a women’s book club that must protect its suburban community from a mysterious and handsome stranger who turns out to be a blood-sucking fiend.

Patricia Campbell had always planned for a big life, but after giving up her career as a nurse to marry an ambitious doctor and become a mother, Patricia’s life has never felt smaller. The days are long, her kids are ungrateful, her husband is distant, and her to-do list is never really done. The one thing she has to look forward to is her book club, a group of Charleston mothers united only by their love for true-crime and suspenseful fiction. In these meetings, they’re more likely to discuss the FBI’s recent siege of Waco as much as the ups and downs of marriage and motherhood.

But when an artistic and sensitive stranger moves into the neighborhood, the book club’s meetings turn into speculation about the newcomer. Patricia is initially attracted to him, but when some local children go missing, she starts to suspect the newcomer is involved. She begins her own investigation, assuming that he’s a Jeffrey Dahmer or Ted Bundy. What she uncovers is far more terrifying, and soon she–and her book club–are the only people standing between the monster they’ve invited into their homes and their unsuspecting community.

My fourth book by Hendrix, all have been 5 stars but I can say with some certainty that this is my new favorite! For those have read My Best Friend’s Exorcism, this book is set in the same neighborhood (reminding me to never ever move to this fictional location) and the author’s note states, “I wanted to pit Dracula against my mom. As you’ll see, it’s not a fair fight.” SOLD.

Hendrix gives us our typical group of housewives who have their 2.5 children, nice homes and hard working, sexist husbands. They decide after a terrible introduction to someone else’s book club, to start their own and they’ll read more interesting novels, aka true crime books. Um, yes please. Can I join already?! But then Mr. James Harris comes to town and things start to turn grave. Patricia knows something is wrong but how can she convince her fellow housewives without looking absolutely insane? This book touches on the socio-economic divide and how the classes deal amongst themselves. Children going missing, how law enforcement reacts. The relationship between husband and wives during this era and women’s ever underappreciated roles as wives, housekeepers and mothers.

With fresh gore and ew inspiring moments, we also have some levity and fun with the vampire/monster tale. Spanning almost a decade, we truly get to see how a monster can truly get his fangs into the meat of this small town. With Hendrix’s unique style in the horror genre, we are blessed with another winner of a read.

I’ve loved Grady Hendrix’s books since I picked up MY BEST FRIEND’S EXORCISM and I haven’t been disappointed since. This is my fifth book by Hendrix and I honestly think it’s my new favorite – THE SOUTHERN BOOK CLUB’S GUIDE TO SLAYING VAMPIRES was everything I was hoping it would be. Plenty of gore and horror mixed with some funny moments to keep things balanced.

After a horrible night at a local book club, our group of housewives decide to start their own “not-a-book-club” and read true crime books together. Patricia is our main perspective and we get to see how she navigates through raising her two kids, keeping a tidy home, and keeping up with everything else in their lives. Grady really sets the scene of this southern small town community – the kind where you never locked your doors, trusted your neighbors, and kids could play outside until it was time to come in for supper.

Things start to get interesting when James Harris comes to town. Everything isn’t always as it appears and Patricia is desperately trying to get her book club members to believe her – even if she sounds crazy in the process. What I’ve loved about all of his books is how they flow so perfectly. When I started this book I went through it so quickly, before I realized it I was halfway through. I will continue to pick up more from Hendrix!